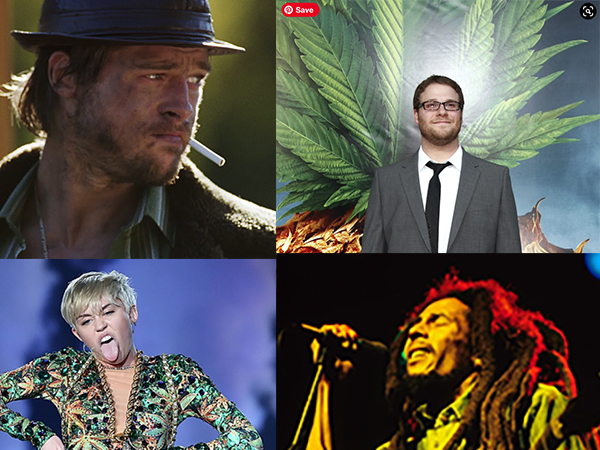 From Snoop Dogg to Willie Nelson, here’s a list of stars who indulge in the cannabis culture.

“I have a medical marijuana prescription, personally. I went in, they said, ‘What do you need it for?’ and I said, ‘I have a very specific ailment – it’s called, I ain’t got no weed on me right now.'”

“Why drink and drive if I can smoke and fly?”

“I think weed is the best drug on earth.”

“So what if I’m smokin’ weed onstage and doing what I gotta do? It’s not me shooting nobody, stabbing nobody, killing nobody. It’s a peaceful gesture and they have to respect that and appreciate that.”

“The effect of it is euphoria.”

Pitt on rolling a joint: “I’m an artist.”

“My vape pen and I maintain a mostly private relationship.”

“When troubled times begin to bother me, I take a toke and all my cares go up in smoke.”

“I think people need to be educated to the fact that marijuana is not a drug. Marijuana is an herb and a flower. God put it here.”

Apple’s co-founder admitted to eating pot brownies in the ’70s.

“Please pass me the peace weed and take some heed. Throw all that mixed up speed.”

“It’s seldom that I smoke, but it helps my thinker.”

“Do weed! Don’t do the other stuff, but weed is good.”

“I smoke a little bit at night, just you know, for fun.”

“But opium and hash and pot–now, those things aren’t drugs. They just bend your mind a little. I think everybody’s mind should be bent once in a while.”

“Well of course I smoke mad weed. I’m on my high horse.”

“I used to make pipes out of soda cans in the day. I’m really bad at rolling joints, but I could in a pinch.”