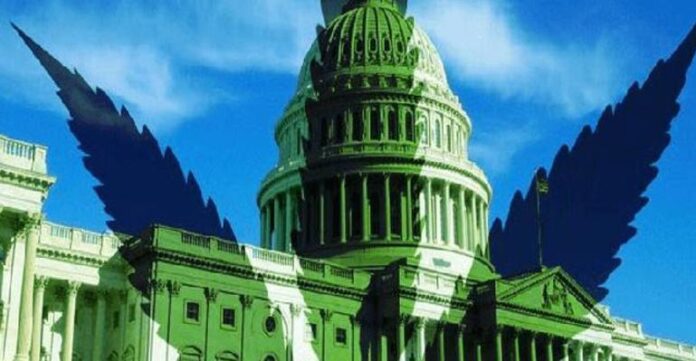 A bill to federally legalize marijuana will receive a full floor vote in the U.S. House of Representatives next week, a top Democratic leader in the chamber announced on Friday.

House Majority Leader Steny Hoyer (D-MD) said the chamber will take up the Marijuana Opportunity, Reinvestment and Expungement (MORE) Act some time between Wednesday and Friday. The floor schedule announcement comes weeks after the leader first confirmed that the House would advance the proposal before the year’s end.

Early in the week, the bill is first expected to go before the House Rules Committee, which prepares legislation for floor action and decides which amendments can be made in order for consideration by the full body.

Hoyer previously said that the chamber would vote on the legislation in September, but that plan was postponed following pushback from certain centrist Democrats who worried about the optics of advancing cannabis reform before passing another coronavirus relief package. Several moderates ended up losing their reelection races this month on the same dat that voters in several red states approved legalization measures, however, raising questions about their strategic thinking on the politics of marijuana.

“I’ve been working on this issue longer than any politician in America and can confidently say that the MORE Act is the most comprehensive federal cannabis reform legislation in U.S. history,” Rep. Earl Blumenauer (D-OR) said in a press release. “Our vote to pass it next week will come after people in five very different states reaffirmed the strong bipartisan support to reform the failed cannabis prohibition. National support for federal cannabis legalization is at an all-time high and almost 99 percent of Americans will soon live in states with some form of legal cannabis.”

“Congress must capitalize on this momentum and do our part to end the failed policy of prohibition that has resulted in a long and shameful period of selective enforcement against communities of color,” he said.

The House approving the bill during the presidential transition could also raise the pressure on President-elect Joe Biden to embrace legalization—a policy he’s declined to adopt despite supermajority support among Democratic voters.

As currently written, the MORE Act, whose lead sponsor is Judiciary Committee Chairman Jerrold Nadler (D-NY), would federally deschedule cannabis, expunge the records of those with prior marijuana convictions and impose a federal five percent tax on sales, revenue from which would be reinvested in communities most impacted by the drug war.

The legislation would also create a pathway for resentencing for those incarcerated for marijuana offenses, as well as protect immigrants from being denied citizenship over cannabis and prevent federal agencies from denying public benefits or security clearances due to its use.

All of those provisions are subject to change through amendments over the coming week.

“This floor vote represents the first congressional roll call ever on the question of ending federal marijuana criminalization,” NORML Political Director Justin Strekal told Marijuana Moment. “By advancing the MORE Act, the House of Representatives sends an unmistakable signal that America is ready to close the book marijuana prohibition and end the senseless oppression and fear that this failed policy wreaks on otherwise law-abiding citizens.”

“Americans are ready to responsibly legalize and regulate marijuana, and this vote shows some lawmakers are finally listening,” he said.

The bill cleared Nadler’s more than a year ago and has been awaiting floor action since.

Even if the far-reaching reform does pass in the Democratic-controlled chamber, as it’s expected to with some bipartisan support, it remains unlikely that the Senate will follow suit, at least during this Congress. Majority Leader Mitch McConnell (R-KY) is a champion of the hemp industry but staunchly opposes further marijuana reform.

Even so, a symbolic vote for legalization could send a strong signal to the incoming Biden administration. Vice President-elect Kamala Harris (D-CA) is the lead Senate sponsor of the MORE Act, but she’s indicated she will not necessarily proactively push the former vice president to evolve further on cannabis reform.

Given Biden’s former approach to championing punitive anti-drug legislation as a senator and his ongoing obstinance on marijuana legalization at a time when polls show that a clear majority of Americans favor the policy change, there remains some skepticism about his willingness to make good on his campaign promises to achieve more modest reforms he has endorsed, such as decriminalizing possession and expunging records.

A transition document the incoming Biden-Harris administration released this month left out mention of those cannabis pledges.

That said, the president-elect has conceded that his work on punitive anti-drug legislation during his time in Congress was a “mistake.”

For what it’s worth, Rep. Earl Blumenauer (D-OR) told Marijuana Moment in August that “the Biden administration and a Biden Department of Justice would be a constructive player” in advancing legalization.