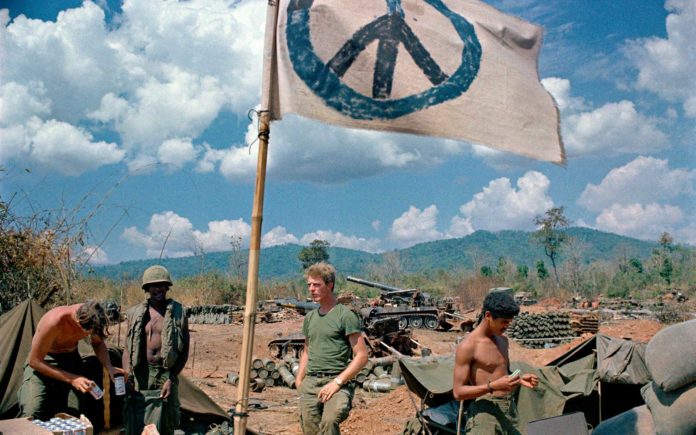 Veterans in the U.S. and Canada are becoming increasingly open to trying cannabis when first-line drugs aren’t working. But their governments aren’t making it easy.

The U.S. Department of Veterans Affairs still refuses to prescribe it, even though many veterans report finding relief from chronic pain and PTSD by using medical cannabis. In Canada, the federal government continues to move the goalposts for veteran access to medical cannabis—most recently reducing the amount of cannabis that Veterans Affairs Canada will help subsidize.

One of the many ironies inherent in this situation: Today’s plethora of cannabis strains, legal cannabis industry, and the tax dollars they generate, were created in part by veterans of past generations.

The most influential generation of veterans may be those who served in the Vietnam War. Soldiers not only used locally-grown cannabis to cope with the stresses of war while in country; they also brought seeds home to North America, where they would become the progenitors of some of today’s most popular strains.

‘It prepared us for battle’

During the Vietnam War about two-thirds of American troops volunteered for service. The rest were drafted. At 18, Bob Luciano entered his local draft office in The Bronx, and at 19 he found himself in Vietnam serving the first of two tours of duty. “That’s where I found out that cannabis is better than drugs,” Luciano, now 69, told Leafly in a recent interview.

The possession, sale and use of cannabis wasn’t legal in Vietnam. But that didn’t stop American troops from developing a taste for southeast Asia’s indigenous varieties.

Bob Luciano recalled the tenor of the times. “In the naval base, when I went to Vietnam, we started smoking weed—pot, at that time we smoked pot,” he said. “The reality was that it was able to prepare us for battle and all the unknown things. We were 18 and 19-year-old kids. The things that you’d see, you’ve never even seen before. It wasn’t like watching the news.”

It helped after service, too

Veterans often face one or many of several conditions that persist well after they have served. Chronic pain and post-traumatic stress disorder (PTSD) are two of the most common. Typically, when a veteran displays signs of PTSD, anxiety, depression, and pain, government doctors put them on a combination of prescription medicines that some veterans ruefully call a combat cocktail.

Prescription drugs provided by veteran health care providers, Luciano said, tend to dull the senses for a short period of time—but the mental trauma and pain would only return, amplified, later on.

“Beyond the horrors of Vietnam, I learned a lot of medicinal benefits of cannabis” during his two tours, said Luciano. “It enabled you to go into battle, complete your mission, talk about it, and then go back in to complete another mission.”

When he could, he found some escape. “During battle, we watched what [farmers] did with the soil because we just wanted an escape. You’d smoke weed, and you’d watch the monkeys play in the trees, and watch the farmers grow.”

While others around him drank or used heroin to dull the sensations of war, he was discovering the soothing effects of the local cannabis crop. “Even God and religion wasn’t enough,” Luciano said. “I could never understand why they were allowing me to kill people.”

Between 1961 and 1975, the ongoing war claimed the lives of an estimated 10 percent of the population of Vietnam, Cambodia, and Laos. In the same period, 56,869 American troops were killed. 153,329 were seriously wounded, and three million soldiers continue to experience long-term psychological damage, the social effects of which are still unravelling.

“Because of the huge trauma they’ve gone through, it’s something unique; it’s almost like the PTSD brain is different because of what they’ve been exposed to,” explained Dr. Mandeep Singh. A psychiatrist with Apollo Applied Research and the Be Well Health Clinic in Toronto, Singh specializes in post traumatic stress. “Because of that, [the brain] actually reacts to both cannabis and traditional medications differently” from a brain that hasn’t experienced similar trauma.

Singh trained in the United States, but when he started practicing in Canada he noticed that many veterans were enduring rounds of medications that negatively affected their quality of life, or just didn’t work.

With PTSD, he explained, “it’s not just the brain that’s affected.” The rest of the body remains on high fight-of-flight alert. These patients “have high cortisol levels,” Singh said, “and their whole body is out of balance.”

In the course of his work with veterans, Singh has observed that most civilian patients will use one or two grams of cannabis per day, while a typical veteran will need up to ten.

“Ten grams: You’re talking about almost twenty joints worth a day,” said Singh. “But they’re functioning well. They’re not looking euphoric, or high, or out of it. I think that’s something to do with the PTSD brain being different in how it reacts to CBD and THC and so forth.”

In 2016, Veterans Affairs Canada reduced the amount of cannabis per day that it pledged to reimburse for veterans whose healthcare providers recommend the medicine. The government agency previously allowed up to ten grams of dried cannabis, or its equivalent in fresh marijuana or cannabis oil, per day. After 2016, that allowance topped out at just three grams.

Meanwhile, in the US, the federal Department of Veterans Affairs still won’t allow VA doctors to recommend cannabis to the nation’s military veterans. Up until a few years ago, VA doctors weren’t even allowed to discuss it with their patients. That’s a hard policy to square with many veterans who’ve seen the help cannabis can offer.

“Weed was like the healing of everything,” Bob Luciano told Leafly. “The war happened in the sixties, we weren’t even over segregation yet, we weren’t over equal rights. We had a lot of issues that were happening, like the demonstrations with the burning of the bras. It was a lot of different influences that were in Vietnam, sharing the same gulch or bunker, and whether you like the next person or not, it unified you. It allowed you to discuss why things were changing. It stopped the war, man. Pot stopped the war.”

American soldiers were so moved by Vietnam’s potent sativa that some of them returned home with pockets full of seeds. Today’s “thank you for your service” culture didn’t exist back then. In fact, many soldiers received cold welcomes. Instead of returning to the US, Luciano took his seeds and headed for Jamaica. For five years he honed his skills as a cannabis grower, operated an organic restaurant with his wife, and developed his Mr. Natural brand of cannabis products, from dry flower to salves.

His years in Jamaica allowed Luciano to experiment with cross-breeding, and learn how environmental factors like air quality and soil affected the plant. Local growers turned him on to the mighty cultivation powers of nutrient-rich Jamaican bat guano.

“I knew Columbian Gold at that time period used to make you very relaxed, and a Kush strain that we had developed in California generated more energy and made you forget what you were thinking of; it made you happy when you were negative,” Luciano recalled, telling the origin story of his Cali Gold variety.

Learning as he went, but always adhering to organic growing practices, Luciano began creating genetic variations that made the most sense for veterans like himself—strains that calm the mind, ease physical pain and stimulated the appetite.

Today, Luciano medicates daily for chronic pain and PTSD. He reaches out to other veterans, helping them navigate the byzantine ways of the VA so that their cannabis use doesn’t negatively impact their treatment. In the past, testing positive for THC would have automatically ended a VA patient’s ability to receive pain medication prescriptions, but that’s no longer the case.

Because of a change in VA policy, American veterans are no longer denied benefits if they are found to be consuming cannabis. VA medical officials now advise patients to disclose their cannabis use, as it may affect the course of action taken by doctors.

Still, some veterans choose not to reveal details of cannabis use to their physicians. Luciano had the VA note his cannabis use on his medical records ten years ago, and he encourages others to do the same. His message is simple: “Notify the VA that you’re getting more medicinal benefits from it,” he said, to force the agency to recognize the value of cannabis and change its policy.