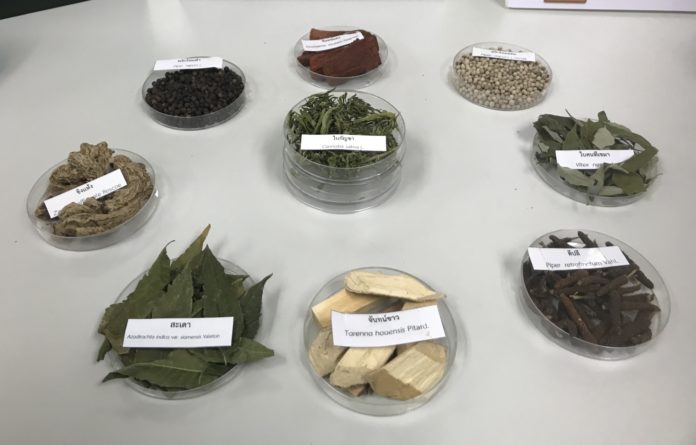 The unraveling of harsh anti-pot laws across the world is finally coming to Asia. In East and Southeast Asia, democracies and dictatorships alike have long skewed toward severe penalties for marijuana users. Thailand, a key ally in America’s global war on drugs, has been no exception.

But the perception of cannabis has begun to change with astonishing speed. Thailand’s right-wing government recently legalized medical cannabis — and identified the creation of a homegrown marijuana industry as a “top priority.”

Even some of Thailand’s conservatives now talk excitedly of churning out “world-class cannabis” from its lush farmlands and stealing the lead before other Asian countries build their own markets. (Around the region, South Korea and the Philippines are taking baby steps toward loosening anti-pot laws while China has quietly permitted research into the drug.)

In Thailand, at this point, there is no marijuana industry. But a few months back, authorities quietly allowed scientists to put together the country’s first-ever cannabis laboratory — one of the few legal facilities of its kind in Asia.

That lab, at a school north of Bangkok called Rangsit University, is finally being unveiled. On a guided tour, The World was given access to more than a dozen pharmacists, medical researchers and agricultural specialists who are helping build this industry from scratch.

Here are some key takeaways:

Importing marijuana to Thailand — even for medical purposes — is still illegal. Researchers have had to work with cannabis confiscated by police and supplied via Thailand’s anti-narcotics bureau. In other words, drug users and traffickers may have inadvertently contributed to the advancement of medicine.

Earlier this year, the scientists were handed about 40 kilo-sized bricks of weed. Most of it was contaminated by pesticides, heavy metals and other residues. But there was enough usable stock to create quality oils laden with Tetrahydrocannabinol, known as THC, which the researchers have practiced distilling in their labs.

The scientists aim to make life more bearable for people suffering through chemotherapy, epilepsy, multiple sclerosis and chronic pain. They’ve been creative in coming up with ways to administer doses of THC.

Prototypes presented so far include THC-infused wafers, massage oils (which can be rubbed on the stomach) and a nasal spray. 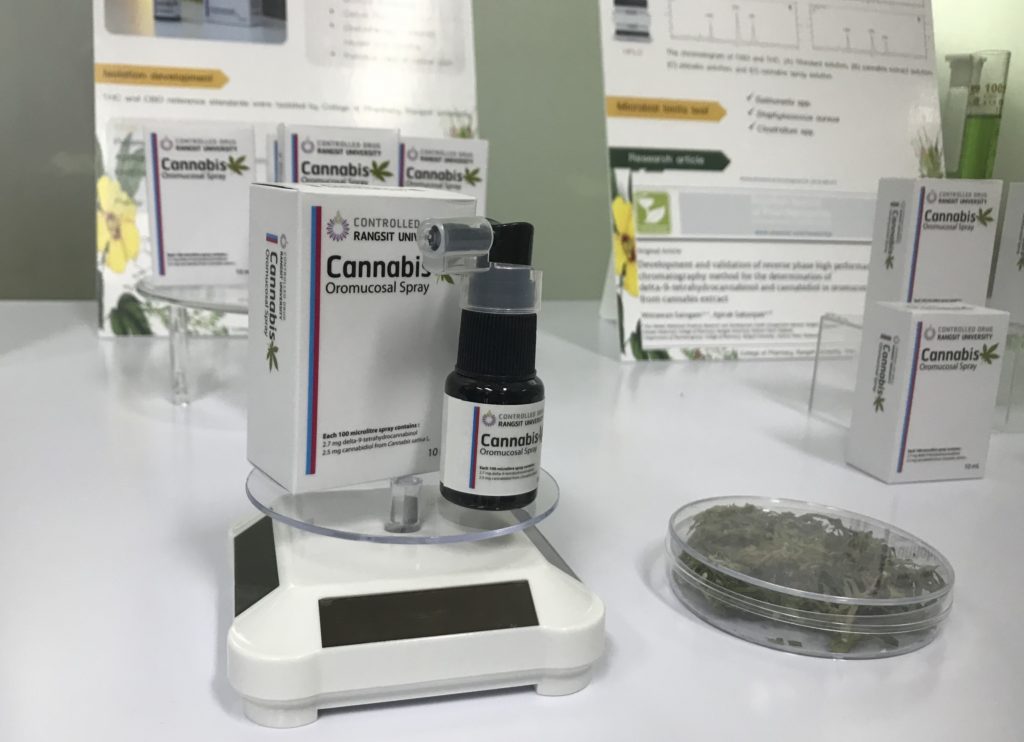 A THC-infused nasal spray invented in a Thai research lab north of Bangkok.

But the most inventive prototype is a flavorful powder that combines marijuana with signature Thai ingredients: sandalwood, ginger and three types of pepper.

The powder is consumed as a liquid after mixing it with coconut oil. This will produce a peppery drink that, according to the researchers, also has “floral and sweet” flavors of coconut.

Related: Move over gummy bears. Soon, you can drink weed in Canada. 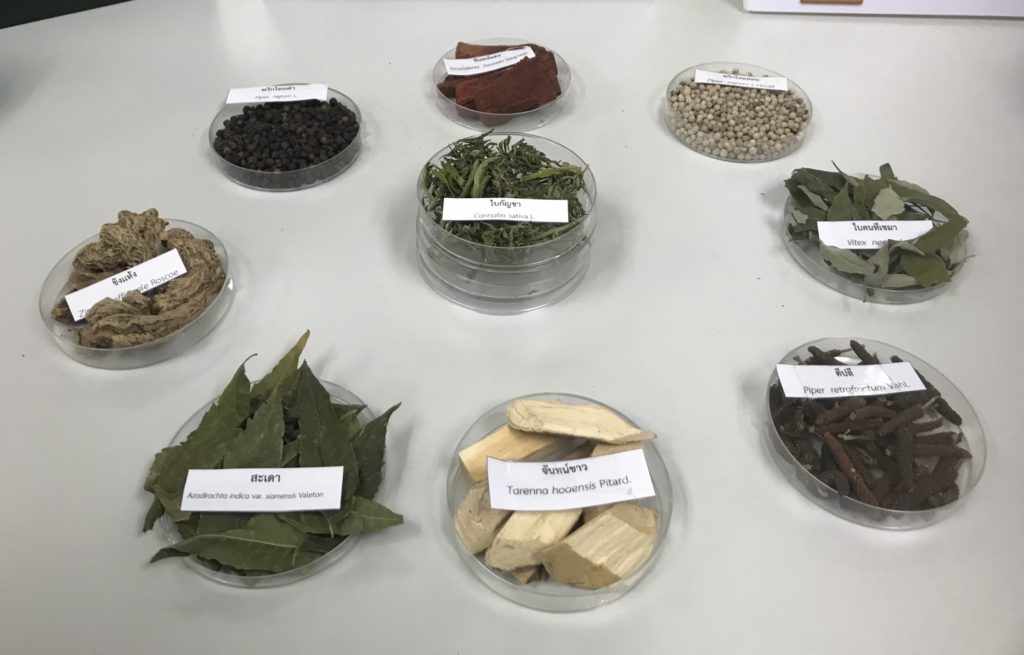 Thailand will be home to Asia’s first ‘ganja studies’ curriculum

The college hosting the cannabis lab, Rangsit University, is putting together what they call a “ganja studies” program taught by professors specializing in pharmaceuticals, medicine and cutting-edge agriculture. (In the Thai language, “ganja” isn’t slang. It’s the formal word for cannabis.)

At this point, the curriculum is envisioned as a minor, not a major, though demand is very high. Several dozen students have already tried to land spots on the enrollment list even though the program may take more than a year to roll out.

As the program is more fully built up, researchers will start creating their own unique cannabis strains that don’t rely on confiscated marijuana from the police, says Thanapat Songsak, dean of the university’s College of Pharmacy. 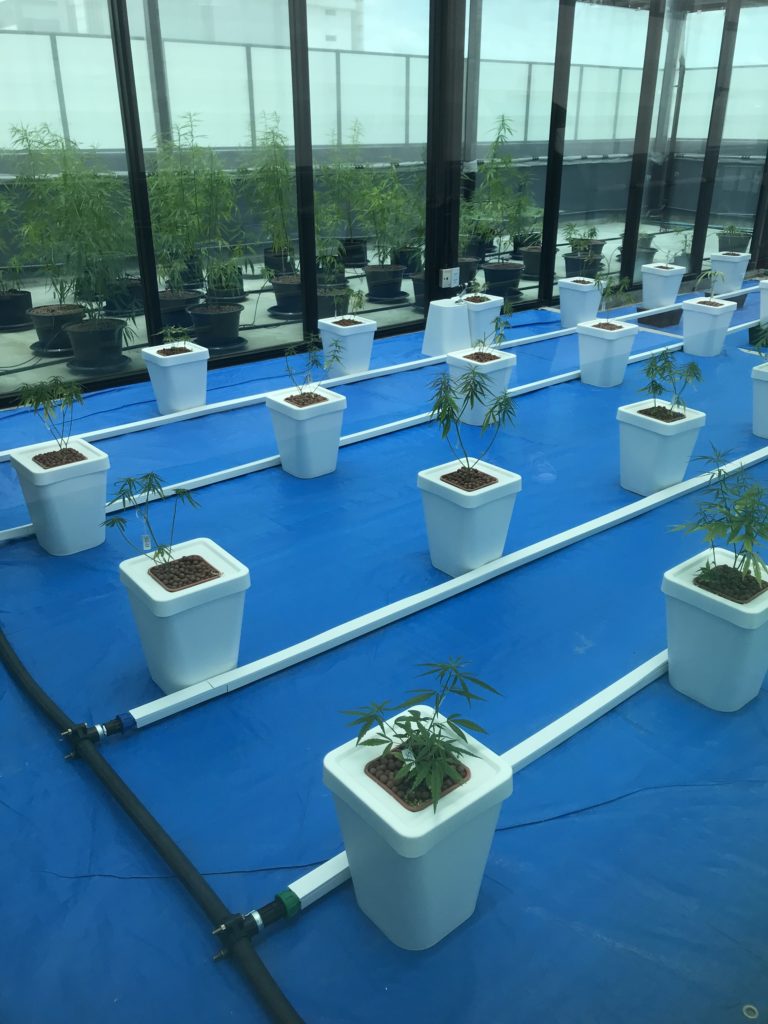 The first crop of legal cannabis plants grown by Thai professors at Rangsit University in a legal lab north of Bangkok.

The buzz around medical cannabis in Thailand is intense. Analysts are throwing around estimates valuing the nation’s potential marijuana market at more than half a billion dollars. And in the halls of government, some politicians are pushing for recreational use, citing California as inspiration.

For starters, there isn’t much supply. Marijuana plants are being grown in only a few government-approved greenhouses. Doctors at state-run hospitals have been cleared to dispense a small batch of THC oils to select patients but, for now, there aren’t enough legal marijuana plants to power an industrialized market. Influential figures in government, Supachai says, remain skittish about the specter of all-out legalization.

There’s also a well-founded fear, he says, that this nascent industry will become monopolized by one or two corporations, possibly foreign, that are focused on profits and not health.

“We can’t let it fall into one [set of] hands, one big company,” he says. “Our responsibility is to develop special Thai strains of world-class cannabis used in medicine. We want to cooperate with farmer co-ops. They grow it, we provide knowledge and it’s all sold to the medical profession. That’s the model.”