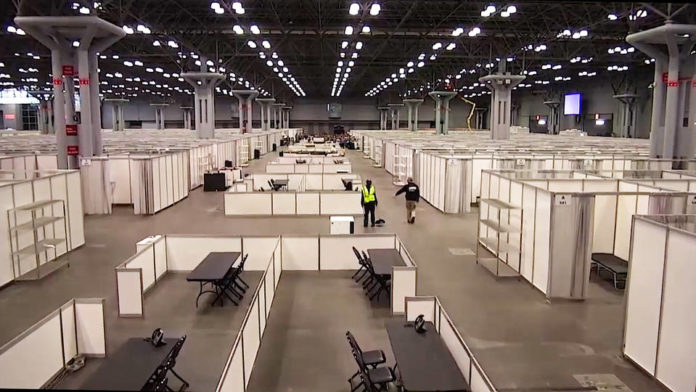 New York remains the epicenter of the crisis in the U.S., representing nearly half of the country’s fatalities. Over the weekend, more than 1,200 New Yorkers died within a 48-hour window, bringing the state’s official death toll to over 4,000. There are over 123,000 confirmed cases. New York City Mayor Bill de Blasio said the city has enough medical supplies to last until Tuesday or Wednesday, as he repeated a plea for any available healthcare workers to join the fight against the pandemic.

Mayor Bill de Blasio: “Please, we need your help. We need supplies. We need medical personnel to come forward to volunteer. We will compensate them, but we need them to come forward and give us their time and energy where it’s needed most.”

At his briefing, Mayor de Blasio also blamed the surge in New York cases on the lack of early testing and mobilization from the federal government.

As New York races to keep up with the explosion of coronavirus cases, progressive critics say the state budget agreed to by Governor Cuomo and the New York Legislature last week will harm New Yorkers already suffering the most from the coronavirus crisis. The $177 billion budget will slash the state’s Medicaid program by $2.5 billion a year, including a $400 million cut in money for hospitals. The budget also rolls back bail reform.

Meanwhile, a prisoner at Rikers Island in New York has died of complications from COVID-19. Hundreds of prisoners and prison workers at facilities across the city have tested positive as calls mount to release more detainees in order to stem the spread of the coronavirus.