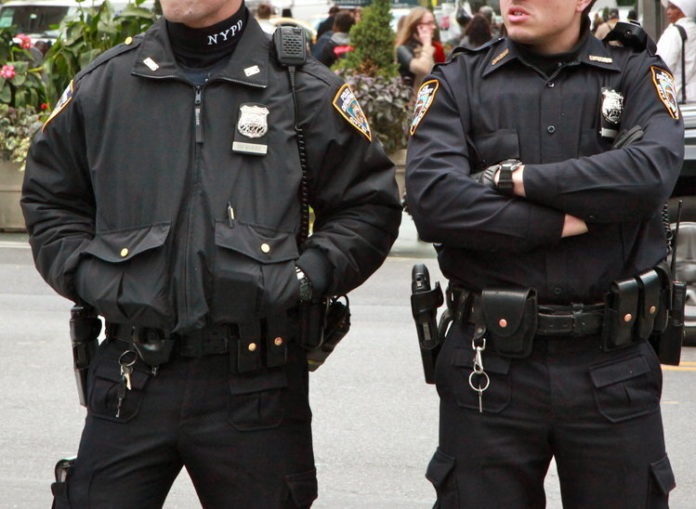 six US senators, including Kamala Harris and Cory Booker, sent a letter to the Department of Justice and the Federal Bureau of Investigation demanding immediate anti-bias training for law enforcement officials amid the coronavirus pandemic.

The senators wrote with urgency, spurred by recent reports from black men who say they were racially profiled for wearing protective face masks, a measure the CDC recommends to prevent Covid-19.

In a video that went viral earlier this month, an officer in Miami stepped out of his squad car to arrest a black man with a face mask moving items near a van filled with equipment. It took the unmasked officer just over 60 seconds to put the man in handcuffs and detain him. It’s now known that the man, Armen Henderson, was a doctor who has volunteered to test homeless people for Covid-19.

In Wood River, Illinois, last month, two black men wearing surgical masks recorded themselves being trailed by a cop, who was occasionally gripping his gun, in a Walmart store. One of the men said that when the officer approached them, he wrongly told them that there was a national and state order banning the wearing of face masks. The local police department has opened an investigation into the incident and told the Washington Post that the officer followed the men because he believed they were “acting suspiciously.” In the video, the men expressed dismay: “We’re being asked to leave for being safe.”

Not wearing a protective face covering has gotten a black man into trouble, too. A video out of Philadelphia earlier this month shows a black man being forcibly removed from a public bus by at least four officers just a day after the city’s transportation authority required that all riders wear face coverings while on public buses, trolleys, and trains. The video, which shows the police first swarm the man then yank him from the bus, is especially jarring during an already tense public atmosphere. Following the incident, the transit authority announced that face coverings were no longer mandatory.

“These alarming reports highlight the fact that racial biases — implicit or otherwise — don’t cease and in some ways are heightened during a national crisis,” Sen. Booker told Vox in an email. “The truth is, black men in this country are unfortunately all too familiar with racial profiling by law enforcement. It is especially important during these difficult times that these harsh truths continue to be exposed and revealed so that we can continue to work to eradicate bias in policing.”

Booker says he and his colleagues wrote the letter because “we can’t afford the dire consequences of not addressing this issue.”

The police targeting of black men is a longstanding American tradition, one that has naturally incited antagonism and black distrust of law enforcement. This relationship, molded by decades of unequal treatment — as seen through traffic stops, wrongful arrests, officer-involved shootings, surveillance, stop-and-frisk, incarceration, and much more — could prove even deadlier for black people at a time of widespread societal fragility.

Black communities are already disproportionately challenged during the coronavirus pandemic. Data from the CDC as of April 20 (albeit incomplete; racial demographic info has not been reported for many patients) shows that about 34 percent of Covid-19 patients are black. That’s despite black people making up only about 13 percent of the country’s population.

These statistics reveal what has been the larger lesson in the pandemic: The coronavirus pandemic is amplifying structural inequality and bringing to greater light the fact that racism along with its bedfellow — deep poverty — has left black people with underlying health conditions (diabetes, hypertension, kidney disease, and more) that are risk factors for the disease.

Now, one of the few practices that could potentially save more black lives — wearing masks — could create the opposite effect. In early April, when the CDC first recommended that all Americans wear face coverings in public, black men were quick to express hesitation: wearing face coverings would intensify racist perceptions of criminality, especially to police. In essence, black men have to pick their poison — risk their lives (and the lives of others) to Covid-19 by not wearing a mask, risk their lives to police officers who see them as suspicious while wearing a mask, or some tragic amalgamation of both.

“THESE ALARMING REPORTS HIGHLIGHT THE FACT THAT RACIAL BIASES — IMPLICIT OR OTHERWISE — DON’T CEASE, AND IN SOME WAYS ARE HEIGHTENED DURING A NATIONAL CRISIS”

Their fear and enterprising coping mechanisms (some men are turning to printed and bright-colored face coverings) are not without reason. In likely every measure of the criminal justice system, from arrest figures to incarceration rates, black people are overrepresented. At the root of the disparity is the longstanding belief that blacks are America’s crime problem. From slave patrols to Jim Crow to present-day policing, racism has motivated the country’s interpretation of crime, leading America to value punishment (incarceration) over prevention (working with the community). And law enforcement culture continues to act on these beliefs, whether covertly or overtly.

“There’s a very long and disturbing history in many locations where police are seen as an intimidating presence rather than a support to black communities,” Marc Mauer, the executive director of the criminal justice research and advocacy nonprofit The Sentencing Project, tells Vox. “It is counterproductive for public safety because these communities are less likely to have trust and confidence in police and less likely to report crime.”

According to Mauer, the distrust exists because of policies rooted in discriminatory policing, like stop-and-frisk, in which officers stop and interrogate people on the basis of “reasonable suspicion.” According to data from the American Civil Liberties Union of New York, in 2011 — the peak of stop-and-frisk in New York City (more than 685,000 stops were recorded) — black and Latinx people made up 87 percent of those stopped by police and 88 percent of those stopped overall were deemed innocent of suspected crimes. Two years later, a federal judge would rule that the policy was “indirect racial profiling.”

Stop-and-frisk is just one of many reasons why black people have come to distrust law enforcement. In a pandemic, fears of being profiled and stopped may force them to forgo key safeguards like wearing a facemask or calling on police for help. Plus, wearing a face mask may lead to more stress that comes with being a perpetual victim of racism. In turn, stress exacerbates the aforesaid Covid-19 risk factors; then comes death.

“Before the pandemic, there was always this issue of implicit bias with police officers and quite frankly with everyone — criminal defense attorneys, prosecutors, and judges — in the criminal system,” says trial attorney Kobie Flowers. According to Flowers, who took on police brutality cases as a former civil rights prosecutor at the DOJ and now sues police departments for wrongful conviction cases, implicit bias is only going to be amplified by the pandemic.

“Implicit bias is a shortcut our brains take to make decisions when we have to make thousands of decisions. But if you’re unaware of how your brain is operating, you can make bad decisions,” Flowers told Vox, adding that the pandemic, with everyone already on edge, is a recipe for a lot of bad decisions.

In the case of traffic stops, Flowers points to a Stanford University study of data from 2015 that found that blacks are more likely to be pulled over and searched for illegal substances than white Americans. This is because of implicit bias, Flowers says, not because black drivers are more likely to be carrying illegal substances. “Now add people wearing masks. My experience, rooted in empirical evidence, suggests that bad decisions by law enforcement due to implicit and even explicit bias will only get worse [during the pandemic].”

And since black people fill many essential worker roles, they can’t just hide at home. (Not that home is safe for black people in the face of law enforcement.) “If you’re at the bottom of the economic ladder, you can’t afford to stay home,” says Kami Chavis, a professor and director of the Criminal Justice Program at the Wake Forest University School of Law. “Black and brown people are the home health aides, the food workers, the sanitation workers who take public transportation and are at greater risk of exposure,” she added.

Plus, the combination of being shamed and treated like scapegoats and a lack of access to medical care spells disaster. Nationwide, black people are more likely to be uninsured than whites.

Chavis tells Vox that the stress on poor marginalized communities will be met with the pressure that officers are facing. “Twenty percent of officers [in New York City] have Covid-19. Why? Because they are face-to-face with people, doing hard work and morale is low,” Chavis says, which can lead to officers lashing out and exhibiting violence.

So far, the reports of racial profiling are anecdotal and there are just a known few. But did the incident occur if it wasn’t caught on camera? Shelter-in-place orders might be limiting the presence of public watchdogs. “One of the greatest advances in police accountability hasn’t been a police body camera or surveillance; it’s the people filming,” Chavis says. “People react differently when they know they’re being watched.”

While the senators called on the nation’s top law enforcement officials to provide anti-bias training, the training, if implemented, might not make even a small dent.

Doubling down on anti-bias training is a start, but preventing more black deaths amid the Covid-19 pandemic will take a culture change. “As with any job, there are written rules, the do’s and don’ts. But then there’s also a culture that isn’t written down — people will engage in certain behavior regardless of what the training says because of a job’s unwritten culture,” Flowers tells Vox. “Until you have that change requiring officers to look at their jobs as guardians of the people — not warriors against the people — the current police culture will continue to overtake any training and bad decisions will continue to be made.”

Greater transparency is a step on the way to culture change. Similar to the recent national push for Covid-19 data disaggregated by race and ethnicity, there must be a push for regular information about coronavirus-related arrests by race and other markers like socioeconomic status. Mauer says we must question how police agencies might be defining crime differently right now. For example, if someone is arrested while wearing a mask, or for not wearing a mask, we must first understand how police departments are identifying this as a crime.

“Agencies must review what their practices are and define what they are charging people for,” Mauer says. “They should review statistics on a monthly basis and disseminate the data. If there seems to be disparities that emerge, they need to determine whether it reflects actual patterned behavior or patterns of law enforcement. And they must engage with leaders in the black community.”

For Chavis, changing culture is ultimately about investigating people’s values going forward — and rethinking who should join the police force in the first place. “We need to be careful about who we give a badge and a gun to,” she says. “We need to know their education level and their psych profile. We need to be more careful with what we’re asking them to do.”