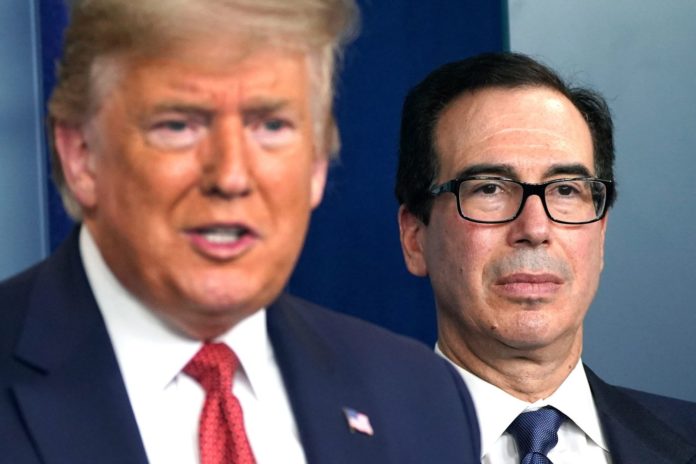 The small-business bailout — otherwise known as the “Paycheck Protection Program” (PPP) — was arguably the most ambitious provision of the $2 trillion stimulus bill that Congress passed last week.

Under the policy, any business (or nonprofit, veterans organization, or tribal concern) with 500 or fewer employees is eligible for a government-backed loan equivalent to eight weeks of its prior average payroll, plus an additional 25 percent of that sum (unless that grand total adds up to more than $10 million, which is the cap for any individual firm). And these loans are really more like grants: Firms don’t need to make any payments on their loans for six months — and if they maintain their workforces, then the government will forgive almost all of the loan (more fine details on this point below). The idea is to keep the small-business sector frozen in place, so that it can rapidly defrost once the coronavirus pandemic has passed.

But you can’t freeze something for later if it’s already spoiled. And many small firms directly impacted by social-distancing measures were already rotting by the time Congress finally passed legislation. For these reasons, the Trump administration was eager to get the PPP up and running as quickly as possible. To that end, the administration (1) made it possible for small-business owners to secure government-backed loans at any federally insured lender that wishes to participate in the program, regardless of whether such banks or credit unions are affiliated with the Small Business Administration, and (2) officially launched the program last Friday — long before most banks would have preferred.

Unfortunately, the small-business bailout season is off to a shaky start, and for entirely predictable reasons. Here, the four big ones:

1. For many banks, the program looks high-risk, low-reward.

Get unlimited access to Intelligencer and everything else New York

The reason Congress decided to route its small-business bailout through private banks was simple: Despite its immense resources, the U.S. government lacks the necessary infrastructure to directly pay firms’ wage bills in a timely fashion (a capacity that many less-wealthy governments possess). But America does have a vast network of federally insured private banks. Thus, by dispensing aid in the form of fully forgivable private-bank loans, Congress could theoretically get cash into business owners’ hands fast: Proprietors would simply walk into their friendly neighborhood bank branches, the banks would lend them money quickly, and the government would make sure everyone was whole later on.

Of course, to make this arrangement work, the federal government has to make processing an enormous number of small-business loan applications worth the banks’ while. This might not seem hard at first. Under the administration’s initial guidance, participating banks would get to charge fees of between one and 5 percent on the loans they dispense (depending on the loan’s size), and collect .5 percent interest, even as the federal government remains on the hook for any loans that fail to pay off.

But banks fear this new line of business is riskier than it appears. Specifically, the administration is requiring banks to verify borrowers’ eligibility (by confirming that they were in operation as of February 15) and certify the size of the loan they are eligible for (by confirming each business’s average monthly payroll costs). Which raises the question: What if a bank gets tricked?

Verifying this kind of information with 100 percent confidence would, in many cases, take an extensive period of time. And yet, the White House is imploring banks to get money out the door fast. So if banks err on the side of being too trusting, will they end up being on the hook for the ineligible loan, or otherwise liable for complicity in fraud or money laundering? If so, some banks insisted that it could take weeks for them to approve each loan.

As of this writing, it appears that lenders will not be held accountable for performing an insufficiently thorough background check on a borrower that proves to be criminal. But they aren’t completely exempt from an obligation to verify firms’ eligibility. That, combined with the logistical difficulties of implementing the program, led banks to insist that a .5 percent interest rate was too low for the government’s proposition to make sense. So the Treasury Department kicked up the rate to one percent on the eve of the program’s launch. This might increase participation among banks, but it could also create financial difficulties for small firms whose monthly costs exceed the forgivable portion of the government-backed loans.

2. The bailout fund is too damn small.

This has been the program’s core flaw since day one. There are 30 million small businesses in the United States. About a quarter of them have already temporarily shut down while 11 percent are on the verge of closing for good, according to a newly released Chamber of Commerce survey. Conservative estimates suggest that it would cost upwards of $1 trillion to replace all their lost revenue for the next three months. And the Paycheck Protection Program has a grand total of $349 billion to dispense.

Bank of America was one of the few major lenders to participate in the PPP on opening day. Over the ensuing 72 hours, it received loan applications from 177,000 small businesses, which collectively requested $32.6 billion in financing. If those loans were all approved, a single lender will have wiped out nearly 10 percent of the bailout fund in just three days.

Treasury Secretary Steve Mnuchin has said that the administration is committed to replenishing the program’s fund once it’s exhausted. And according to Politico, there is bipartisan consensus in Congress behind such an expansion. On Friday, Democratic House Speaker Nancy Pelosi shelved her party’s more expansive plans for a “Phase 4” relief bill, arguing that Congress should first “do the same bill we just did,” only larger and better targeted. But the Senate is on vacation until April 20. And until then, businesses are competing for scarce bailouts on a first-come, first-served basis.

“There’s a sense of urgency that there’s not actually enough money in the loan fund for the number of people who actually are desperately in need of help right now,” Amanda Ballantyne, executive director of the small-business advocacy group Main Street Alliance, told Bloomberg.

3. The most vulnerable mom-and-pops will likely come away empty-handed.

The program’s first two flaws — banks’ fears of the program’s potential liability risks and the insufficient amount of money available for lending — combine to produce this third one. As previously mentioned, Bank of America is participating in the program — but they’re only lending to small businesses that already have a “business-lending and a business-deposit relationship” with the bank. Some institutions, such as Sunwest Bank, are taking applications from new customers. But they are the exception, not the rule. Most lenders are going with the firms they know. And why wouldn’t they? Given that the demand for these loans exceeds their supply, there’s little incentive for banks to take a risk on a new client — especially when they could be held culpable for extending credit to a fraudulent borrower.

Most small firms have a preexisting relationship with a lending institution. But some of the most vulnerable small businesses operate on cash and do not boast any such relationships. Meanwhile, such enterprises are also unlikely to be as well-prepared and informed about policy changes as larger, more profitable ones, or pseudo–small businesses like chain-restaurant franchises. Taken together, all this means that the companies most in need of aid are the least likely to actually secure it before the well runs dry.

4. A (well-intended) last-minute rule change makes the program a worse deal for a lot of businesses.

The primary aim of the Paycheck Protection Program (as its name suggests) is to protect workers’ paychecks. So when the Trump administration discovered that the bill Congress passed technically allowed firms to lay off their staff any time between February 15 and April 26 — and still secure loan forgiveness, so long as they rehired those workers by June 30 — it searched for a rule change that would close that loophole. The policy it settled on was to tweak the terms of forgiveness. Previously, firms were told that as long as they didn’t fire staff, they would have the portion of the loan spent on payroll, benefits, utilities, rent, mortgage payments, or other debts completely forgiven. Now, they will only receive such forgiveness if they spend 75 percent of their loan on payroll. This eliminates the potential incentive to lay off all of one’s staff for months at a time; shrinking one’s payroll costs in that manner would mean throwing away free government money. And yet, the new terms also means that for small businesses that aren’t extremely labor intensive, the program suddenly became way less generous. Slate’s Jordan Weissmann deftly explains the issue, in a report focused on the plight of Rocco Frattaroli, a Dairy Queen owner in California.

For businesses that spend the vast majority of their money on salary wages, [the PPP] is an excellent deal. “This is a perfect program for us,” Brett Snyder, president of the travel blog and concierge service Cranky Flier told me. The key is that his firm doesn’t have much of a rent burden, and other than staff pay, it just covers some things like server space. “If we get this, then salaries get restored and the people who had to cut back hours will be able to come back. That will handle everything.” For an operation that’s still running but in a diminished capacity, like a sit-down pizzeria that does a lot of takeout, it’s also a boon. But for businesses that pay a lot of rent and have seen their revenue sink, or have been shut down entirely, it’s much less of a lifeline.

Congress can increase the program’s appropriation whenever it wants. And it can rewrite the bill to eliminate the loophole the Trump administration identified without leaving small firms worse off. And the Treasury Department can clarify banks’ liabilities. They should do those things.

But for many businesses, by the time all this is done, it will already be too late.