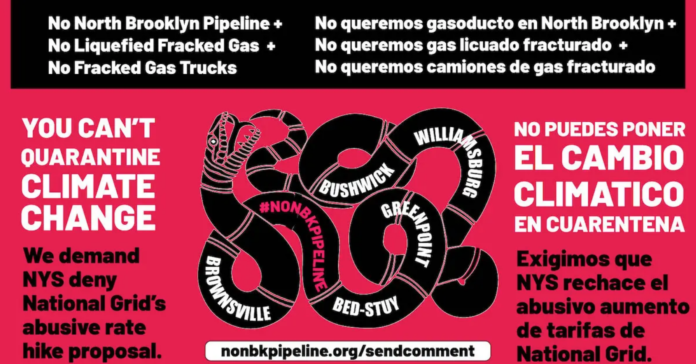 If you’ve ever attended a climate strike or seen one on TV, chances are you’ve seen climate-conscious demonstrators protesting fracking. Fracking is a hugely controversial oil extraction process that takes a major toll on the environment, which explains why Brooklyn is aggressively protesting against National Grid installing a fracking pipeline through the Northern part of the most populated New York borough right now.

We say no rate hikes on the backs of those who can afford it the least! We say no pipeline through mostly Black and Brown communities! We say no no fracked gas expansion in communities that have suffered decades of environmental pollution!” reads a call-to-action from protest organizers. Clearly, locals aren’t happy about this, and protests will likely continue until the government decides to prohibit the installation of a Brooklyn pipeline. 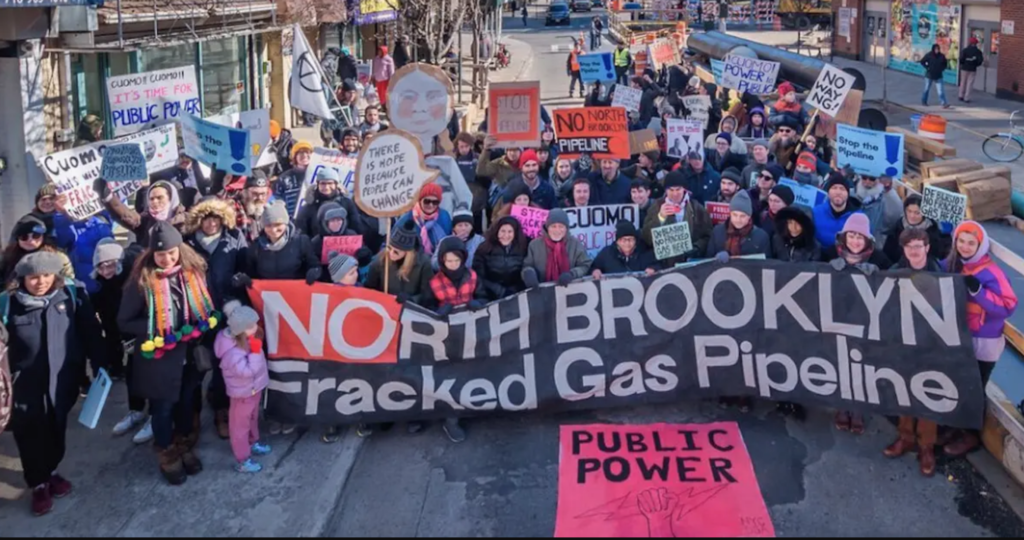 Here’s why Brooklyn is protesting the installation of a pipeline:

If you aren’t already familiar with the process of fracking, it’s an oil or gas extraction procedure which injects liquid into subterranean rocks, boreholes, and other surfaces at a high pressure, to force open fissures. In addition to raising taxpayer dollars on an exorbitant level, it severely damages the surrounding land, pollutes the air and local waters, and requires wasteful amounts of water.

Per Fractracker, National Grid is posing this pipeline as a way to “modernize” New Yorkers’ gas systems, but they’re actually using it to gain profit for the company’s shareholders. Additionally, the 6,200-foot pipeline won’t be servicing the affected communities, though it will bring hazardous conditions to the affected neighborhoods (along sections of Flushing Avenue, Bushwick Avenue, Moore Street, Manhattan Avenue, and Montrose Avenue) and will disproportionally affect communities of color.

Because installing a pipeline takes contributes to air pollution and water contamination, it will also hold New York State back from attaining its renewable energy goals, as the state should be focusing on using geothermal energy, and other energy efficient resources. This is keeping us dependent on fossil fuels, and it would cost almost $185 million from ratepayers over the next three years. Yikes.

What can I do to convince Andrew Cuomo to invest in renewable energy?

No North Brooklyn Pipeline is a local organization that is working to convince Governor Andrew Cuomo and Mayor Bill De Blasio to invest in other renewable energy, instead of allowing National Grid to run a pipeline through North Brooklyn. They regularly hold protests across the city, and in June 2020, they submitted a letter signed by 160 organizations to call on Cuomo and the New York Public Service Commission (PSC) to reject National Grid’s fracked gas proposals, per a press release.

They also created an Action Network page that provides viewers with a template to send a digital message to decision makers, to hopefully change their minds about installing a pipeline. While we don’t know that it will actually change their minds, every possible action definitely helps.

EVEN THOUGHT IT’S TUESDAY… it’s not too late to Call Cuomo to Stop National Grid’s North Brooklyn Pipeline 877-235-6527 In May, New Yorkers scored an enormous victory and defeated the Williams NESE pipeline that had been proposed for NY Harbor. Now, corporate utility National Grid is proposing a “backup plan” to the rejected Williams NESE pipeline, and their “plan B” is riddled with dirty fossil fuels. Part of their plan includes hastening construction of the Metropolitan Reliability Project, which locals dubbed as the North Brooklyn Pipeline. The North Brooklyn fracked gas Pipeline is currently under construction in Brownsville and Bushwick, and is destined for Williamsburg and Greenpoint. It is being built through black and brown communities that were not consulted about the proposal. It’s dirty, dangerous, and commits New York to higher utility rates and decades of climate destroying fracked gas. Call Governor Cuomo at 877-235-6537 and tell him to stop the North Brooklyn Pipeline, and make National Grid opt for a “no infrastructure” energy option instead! Text “CuomoMondays” to 69866 to sign up for weekly text reminders about calling the Governor to pressure him to reject fossil fuel projects. #NoNBKPipeline #CancelRent #UtilitiesStrike #BlackLivesMatter #NoNBKPipe #NorthBrooklynPipeline #KnowYourPolluter #NationalGrid #GovernorCuomo #CuomoWalkTheTalk #FrackedGas #StillToxic #AirPollution #Methane #CarbonFootprint #GreenhouseGases #pollution #ClimateChange #NoPipelines #GreenNewDeal #OffFossilFuels #UrbanArea #Bushwick #greenpoint #brownsvillebrooklyn #bedstuy #Williamsburg #NewYork

Fracking endangers its surroundings, and planet earth as a whole. Even if you aren’t a New York resident, it will inevitably affect your beloved planet, in the long run.

We Are Seeking New Applicants for Our Local Reporting Network