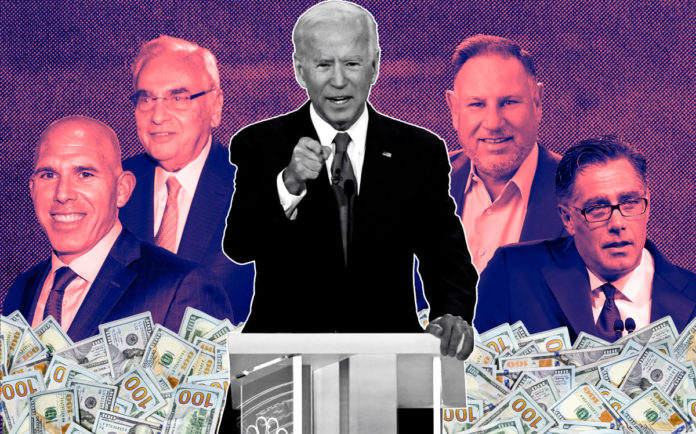 But the RXR Realty CEO is one of dozens of real estate powerhouses who have raised big money for the former vice president’s 2020 presidential campaign.In a Friday news dump on Dec. 27, Biden’s team released a list of 259 “volunteer fundraisers” — individuals who had raised at least $25,000 for the campaign. In addition to the world of entertainment and politics, numerous real estate players dot the list.

David Birdsell, a professor at Baruch College’s Marxe School of Public and International Affairs in New York, said the number of contributors could have been far higher.

“I think it is significant that only 35 people in this industry have raised $25,000 or more” for Biden he said, while noting that the real estate industry traditionally skews Republican.

Biden’s backers
The three-dozen industry movers on Biden’s $25,000 and up list come from across the U.S.

Some of the others include Miami investor Michael M. Adler, whose Adler Group has developed and acquired more than 20 million square feet of industrial, office and retail space, and over 8,000 residential units. Another big name is Thad Wong, who co-founded @properties, Chicago’s dominant residential brokerage. The firm was No. 1 in the city with $6.54 billion in sales, according to a TRD March 2019 ranking.

Wong and Bluhm each hosted separate fundraisers for Biden at their homes in September. At the event in his downtown Chicago home, Bluhm introduced the former vice president, telling guests that rival presidential candidates Senators Elizabeth Warren and Bernie Sanders “don’t represent the Democratic Party” he supports, adding he thought Biden had the best shot at defeating President Trump.

“Mr Bluhm is right,” Sanders later responded in a statement to CNN. “The Democratic Party I represent is the party of the working class — not billionaires.”

Biden’s campaign did not explain the timing of its Dec. 27 disclosure — the list’s release was not required — and did not respond to questions from TRD about whether there were any potential conflicts among its contributors.

“At a national level you’re going to see much less concern for taking real estate money than you might in New York City, where it is such a hot-button issue,” Birdsell said. Corporate money and financial-services money caused greater alarm, he said.

Tom Hendrickson, a North Carolina real estate investor and developer, is another top bundler. Hendrickson confirmed he had raised funds for Biden but declined to comment further, when contacted over LinkedIn.

Mitchell Berger, a founder of the Florida law firm Berger Singerman, was also on the list. The firm has a significant real estate practice group and has helped negotiate hotel acquisitions, in addition to representing firms like New York-based Terranova Properties and private prisons operator Geo Group. Thomas Safran, whose Safran & Associates is a prolific developer of luxury and affordable housing in Southern California, is another.

On Jan. 2, Biden’s campaign announced it had raised $22.7 million in the fourth quarter. The figure was more than previous months and was $1.5 million ahead of what Warren took in. But he still lagged former South Bend, Indiana, Mayor Pete Buttigieg; and was far behind the $34.5 million Sanders collected.

And unlike Sanders, who released a $2.5 trillion housing plan in September, Biden has yet to offer a comprehensive housing plan. He has stated previously that he wants to make it easier to build denser affordable housing near public transportation, has pledged to increase the energy efficiency of low-income housing and has said he wants to house all formerly incarcerated people.

Why Vaping Provides A Different High Than Smoking

Massachusetts Police Can Easily Seize Your Money. The DA of One County Makes It...

Mind Vs. Body High: 4 Ways To Tell The Difference