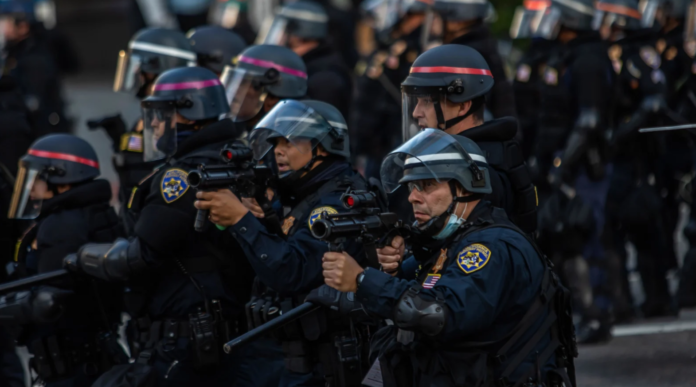 Our modern world is full of unholy alliances. Evangelicals and President Donald Trump, Sprint and T-Mobile, pickles and trash beer (actually, that last one sounds awesome). But there are few relationships as toxic as one uncovered in a new report from accountability watchdog LittleSis. Researchers dug into how the fossil fuel industry is tied with policing, providing money and support that can militarize the police and ultimately help Big Oil persevere just a little longer in ruining the planet. In an era where environmental and racial justice are increasingly entwined, the report shows that the forces aligned against real justice are increasingly connected.

Big Oil has a vested interest in preserving the status quo, which has allowed massive companies to make millions, enriching the shareholders and CEOs at the top. With fossil fuel companies increasingly facing protests that are eroding their social license to operate and economics turning against oil and gas, companies have taken to backing anti-protest laws and other forms of repression. Supporting police foundations is one avenue that Big Oil has turned to both curry favor with police forces and provide them with funds that can help quell protests.

The LittleSis analysis found companies, including Chevron, Valero, Marathon, and Hilcorp and pipeline developers like Energy Transfer Partners are among those kicking money or that have a seat on the board for police foundations from New Orleans to Corpus Christi, Texas. Even international firms that have a big footprint in the U.S., like Shell and Aramco, are getting in on the action or finding other avenues to sponsor the police. Utilities like Exelon and Duke Energy are also patrons of police foundations.

There are many layers of bullshit to scrape away at here. The first is that many of these companies are themselves criminal! Exelon, for example, is operating under the cloud of corruption tied to lobbying and political favors, similar to that other major corruption case tied to a utility in Ohio. Shell? Facing criminal charges in its home base in the Netherlands. Chevron? Currently refusing to pay out a $9.5 billion settlement for polluting the Amazon. Chevron, Shell, and Marathon are getting sued in Baltimore for ruining the climate. Energy Transfer Partners just got its ass kicked in court over the Dakota Access Pipeline. I could go on, but you get the point. These are not upstanding citizens.

They’re also really terrible neighbors. Whether its oil spills, toxic emissions of cancer-causing chemicals, coal ash spills, or other crises, fossil fuel companies have a long history of ruining communities they operate in. Those communities are often Black, brown, or indigenous ones exposed to the slow violence of pollution and the fast violence of racist policing practices.

The fossil fuel-police connection is like evil Voltron. And as calls mount to defund the police and get off fossil fuels, it’s also unfortunately true that the relationship between the two could tighten. If—and this is a big “if”—civic leader heed calls to the defund the police and reroute that money to actually useful things, police forces may rely even more on big-dollar donors to bankroll continued militarization. When—and let’s be real, it is when—the fossil fuel industry finally starts to sink in earnest, it’s not likely to go quietly. Enlisting the support of local police forces is one way to string things out a little longer and eek the last few millions out of oilfields and refineries.

There’s been a growing consolidation between the environmental and racial justice movements, and for good reason. The new report, though, shows why there’s more urgency than ever.

What Would Happen If Gun Laws Were Enforced Like Marijuana Laws

The Secret IRS Files Short Form: A Quick Guide to What We Uncovered