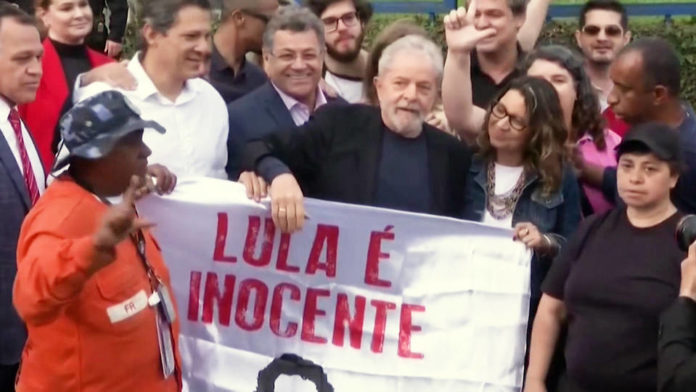 Brazilian ex-President Lula gives speech after prison release
Thousands of supporters of Luiz Inácio Lula da Silva have gathered to see the former Brazilian president after he was released from prison.

Lula spoke at a metal workers union meeting near Sao Paulo on Saturday, and was greeted with applause and cheers by the crowd.

The left-wing leader had spent 18 months in jail on corruption charges.

But a judge ordered his release after a Supreme Court ruling that defendants should only be imprisoned if they had exhausted all appeal options.

In a 45-minute speech to members of the union he once led, Lula attacked his rival, right-wing President Jair Bolsonaro, for his record in office.

“People are hungrier, they have no jobs, people work for Uber or delivering pizzas on a bike,” Lula said in remarks sometimes drowned out by cheers from the crowd and fireworks overhead.

Mr Bolsonaro tweeted that Lula was “momentarily free, but guilty”.

“Your Debt Is Someone Else's Asset”: Calls Mount to Cancel Debt & Halt Wealth Transfer to the Rich

The Nonprofit College That Spends More on Marketing Than Financial Aid