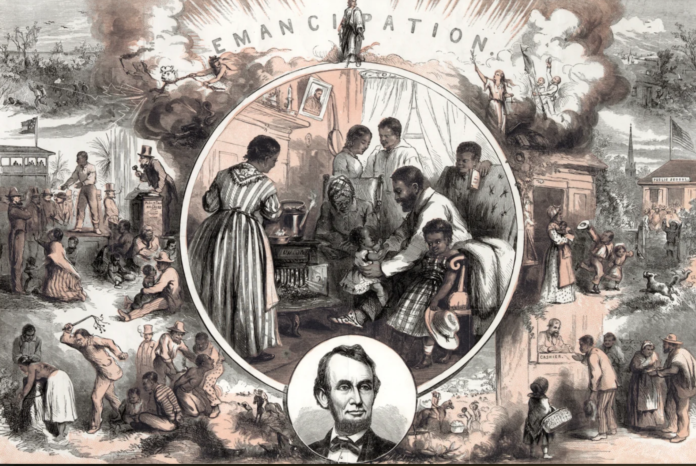 Juneteenth (short for “June Nineteenth”) marks the day when federal troops arrived in Galveston, Texas in 1865 to take control of the state and ensure that all enslaved people be freed. The troops’ arrival came a full two and a half years after the signing of the Emancipation Proclamation. Juneteenth honors the end to slavery in the United States and is considered the longest-running African American holiday.

Confederate General Robert E. Lee had surrendered at Appomattox Court House two months earlier in Virginia, but slavery had remained relatively unaffected in Texas—until U.S. General Gordon Granger stood on Texas soil and read General Orders No. 3: “The people of Texas are informed that, in accordance with a proclamation from the Executive of the United States, all slaves are free.”

The Emancipation Proclamation issued by President Abraham Lincoln on January 1, 1863, had established that all enslaved people in Confederate states in rebellion against the Union “shall be then, thenceforward, and forever free.”

Juneteenth and Slavery in Texas

In Texas, slavery had continued as the state experienced no large-scale fighting or significant presence of Union troops. Many enslavers from outside the Lone Star State had moved there, as they viewed it as a safe haven for slavery.

After the war came to a close in the spring of 1865, General Granger’s arrival in Galveston that June signaled freedom for Texas’s 250,000 enslaved people. Although emancipation didn’t happen overnight for everyone—in some cases, enslavers withheld the information until after harvest season—celebrations broke out among newly freed black people, and Juneteenth was born. That December, slavery in America was formally abolished with the adoption of the 13th Amendment.

READ MORE: Does an Exception Clause in the 13th Amendment Still Permit Slavery?

The year following 1865, freedmen in Texas organized the first of what became the annual celebration of “Jubilee Day” on June 19. In the ensuing decades, Juneteenth commemorations featured music, barbecues, prayer services and other activities, and as black people migrated from Texas to other parts of the country the Juneteenth tradition spread.

In 1979, Texas became the first state to make Juneteenth an official holiday. Today, 47 states recognize Juneteenth as a state holiday, while efforts to make it a national holiday have so far stalled in Congress.

If You Want to Tackle Climate Change, Start With Methane

How NYPD’s Vice Unit Got Prostitution Policing All Wrong

Woman enslaved as a maid for nearly 40 years freed