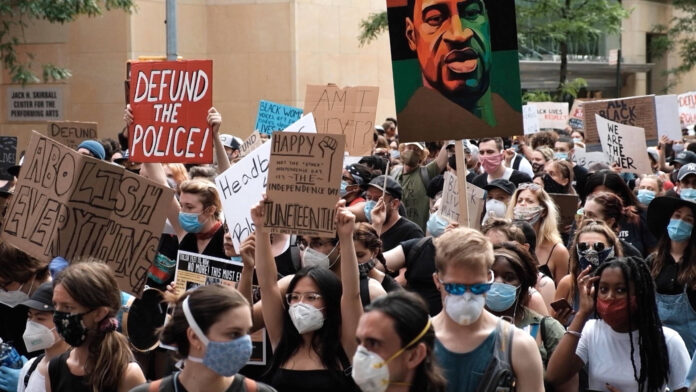 AMY GOODMAN: This is Democracy Now!, democracynow.org, The Quarantine Report. I’m Amy Goodman, as we turn now to look at a slew of laws pending in Republican-led state legislatures that criminalize protest.

According to the International Center for [Not-for-Profit] Law, 81 anti-protest bills have been introduced in 34 states so far this year. Three bills aimed at limiting protests have already been signed into law. More are expected soon. Arkansas and Kansas have passed measures that target protesters who seek to disrupt oil pipelines.

Last Monday, Florida’s Republican Governor Ron DeSantis signed a controversial law that’s widely viewed as a response to the Black Lives Matter movement. Under the new law, which went into effect immediately, a public gathering of three or more people can be classified as a “riot.” Anyone who willingly participates in such a gathering can be charged with a third-degree felony. The law also raises the charge for protesters who destroy historic structures, including flags and memorials and Confederate statues, to a felony. It grants civil immunity to drivers who run their cars into crowds of protesters, even if the driver kills someone. During a signing ceremony for the new law, Governor DeSantis noted it will also require cities to receive approval from the state before they cut their police budgets.

GOV. RON DESANTIS: This bill actually prevents against local governments defunding law enforcement. We’ll be able to stop it at the state level. And if you look at some of these places that have done this, they’ve already seen crime go up, even just diverting some of the funding to this. And so it’s an insane theory. It’s not going to be allowed to ever carry the day in the state of Florida. And this tool — this bill gives us the tools to make sure that that doesn’t happen.

AMY GOODMAN: This comes as a study by The Washington Post found the overwhelming majority of Black Lives Matter protests were peaceful, with more than 96% involving no property damage or police injuries. The Post also reported police officers or counterprotesters often instigated violence.

Meanwhile, many anti-protest bills pending in other states have the exact same language as the Florida plan. Some of the laws were drafted with support from the conservative American Legislative Exchange Council, or ALEC, including so-called critical infrastructure bills aimed at criminalizing protests against the fossil fuel industry.

For more, we go to Washington, D.C., to speak with Nick Robinson, senior legal adviser at the International Center for Not-for-Profit Law, which has been tracking these anti-protest laws and found, with these latest examples, 17 states have now enacted at least 30 anti-protest bills and executive orders.

Nick, welcome to Democracy Now! The Republican legislatures are calling them “anti-riot laws.” But explain how extreme they are, starting with Florida, which is already being sued, Ron DeSantis, the governor, being sued.

NICK ROBINSON: Yeah, thank you for having me.

You know, as you say, these are really extreme laws. And what they do is, as in Florida, they expand the definition of rioting so it’s incredibly broad. So, you know, for example, in Florida, under this new bill, let’s say you just go to a protest, and a handful of people kick over a trash can. Just by being part of that crowd, you can be arrested and prosecuted for rioting and face a felony. And further, actually, under the law, no one actually has to commit any violence at all. So, if people — there’s just a danger to property, then people can be arrested for rioting. So this is just a really super subjective standard that can be used to target protesters.

AMY GOODMAN: So, let’s go through, for example, in Florida, what each of the parts of the law are, everything from saying that protesters can’t get bail, they have to stay overnight, they’re charged with felonies. And then — and we’re seeing this in Florida, as well as all over the country; this is astounding, 81 laws in the last few months being put forward across the country — that drivers who hit protesters with their cars, run them over, will not be found liable.

NICK ROBINSON: Yeah, no, so this is just — you know, it’s really chilling for protesters. And we see this in state after state after state, these bills being introduced and now getting passed, like, as you mentioned, in Florida, in Oklahoma. A bill is about to get passed in Iowa. So, for example, in Florida, on this rioting provision, if you’re with 26 or more people or you’re obstructing traffic, it becomes a felony and an aggravated riot, punishable by 15 years in jail. Right? So that’s just chilling. People already are concerned about being able to go out and protest now under this law, because they just don’t want — this is a life-altering charge, if you get this, against you. There’s five years in jail if you deface a monument. So, let’s say you tag a Confederate monument or something like that, again, a super serious charge under the Florida bill.

And it also says, as you pointed out, that even if you intentionally hit a protester, if you can show that that — if you can claim that that protester was engaging in a riot, then you get civil immunity from a civil suit. And as I said, you know, the problem with the Florida bill, like so many anti-riot acts around the country, is they’re just incredibly broad, and they can capture peaceful protest activity. So, yeah, so we’re just seeing this trend across the country, including these driver immunity bills. So, we’ve seen at least 15 bills introduced that would create new immunity for drivers who hit protesters with their cars — so, the one in Florida, this bill that just got passed in Oklahoma. There’s a bill in Iowa that’s about to be passed.

AMY GOODMAN: And what’s going to be happening there?

NICK ROBINSON: Yeah, so, in Iowa, there’s a bill that if you hit a protester with your car and it’s during an unpermitted protest in a street, you can — you’re immune from civil liability. And just to take a step back to understand, there’s a real serious problem of protesters in Black Lives Matter protests this past summer, up until today, being hit by cars. So, I know you already mentioned at the top of the hour the tragedy in Charlottesville, when a neo-Nazi purposefully ran his car into a crowd of protesters. But we’ve seen dozens of instances like this around the country of protesters being hit by cars, often intentionally. And instead of taking steps to protect protesters, which is what needs to happen right now, we’re seeing these state legislatures introduce bills that would instead protect drivers. And so this is just kind of asking for violence.