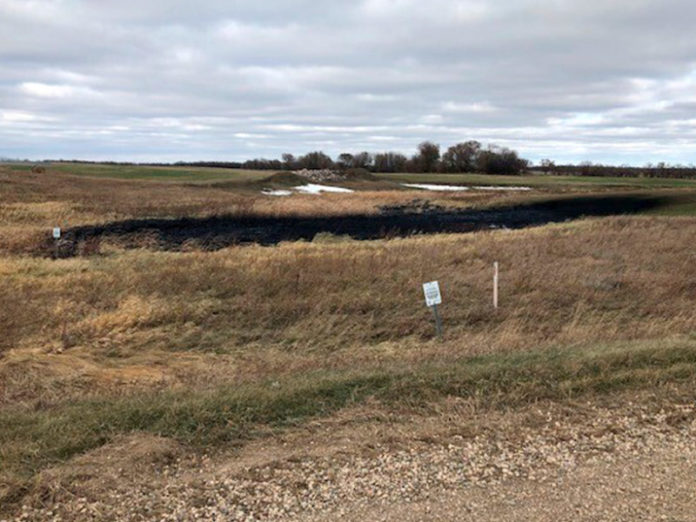 A section of the Keystone Pipeline spilled half an Olympic swimming pool’s worth of sludgy oil into a North Dakota wetland on 29 October. Cleanup is underway, but ecologists say that residue from this type of oil spill could persist in the wetlands for a long time.

“There is big difference between conventional oil and the oil that we mine in Canada’s oil sands region” where the oil in this spill came from, said Diane Orihel, an assistant professor in aquatic ecotoxicology at Queens University in Kingston, Ontario, Canada. 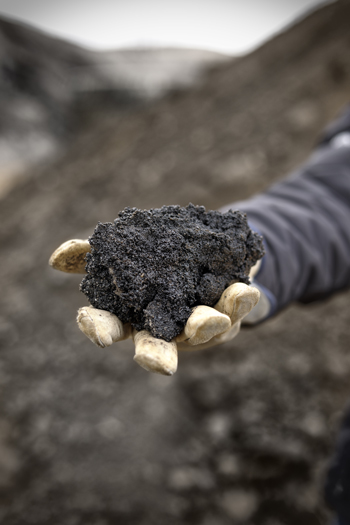 Tar sands oil, called bitumen, is too thick to flow through pipelines unless it’s diluted by a lighter gas like kerosene or diesel fuel. Credit: iStock.com/francisblack

The combination of diluent and bitumen is called dilbit. When spilled, “at first, the dilbit will float, but as the diluent…is blown off to the atmosphere, the heavy stuff—that is, the bitumen—sinks,” Orihel said.The tar sands oil that runs through the pipeline from Canada “contains a heavy oil called bitumen,” she said. “This bitumen is like peanut butter. It’s hard to push peanut butter through a straw. Likewise, it’s hard to push bitumen through a pipeline.” The industry cuts the sludge with a lighter gas, called a diluent, to flow it through the pipes, “somewhat like thinning a soup that’s too thick.”

Oil spill researcher Christopher Reddy at the Woods Hole Oceanographic Institution in Woods Hole, Mass., said that “this material is so sticky, for lack of a better word, it does make it manageable. It’s going to stick to anything, and so you can remove it relatively quickly.” The company responsible for the leak, TC Energy, scoops up oil-soaked soils and sediments from the affected area, half an acre of wetland in this instance.

“The ultimate goal when you respond to an oil spill is always to try to keep a bad thing from getting worse,” Reddy said. “Those folks who are the decision-makers are deciding that removing that oil from the system is more advantageous than leaving it there.”

This oil spill is similar to another spill that happened in 2010, not the Deepwater Horizon spill in the Gulf of Mexico, but the oft-overshadowed Kalamazoo River spill in Michigan. A lot of what researchers know about bitumen’s effects on aquatic environments comes from studying that event or laboratory experiments.

“Whereas scientists have been studying conventional oil spills for many decades, diluted bitumen as a field of study in ecotoxicology is very young in comparison,” Orihel said.

Orihel learned from her lab experiments “that the window of time to clean up a diluted spill into fresh water is very short. We observed that the bitumen quickly, i.e., within 24 hours, became more dense and viscous, and consequently sank. We also observed changes in the abundance and species composition of the lower food web in response to experimental spills of diluted bitumen.”

They also measured the concentrations at which dilbit becomes lethal to some aquatic microbes, but there is little to no research on the sublethal and long-term effects on complex aquatic organisms, she said.

Reddy’s team has been working on samples taken from the Kalamazoo site. “When the Kalamazoo River spill occurred in 2010, the water was pretty high, so it actually left a ring around the collar of a tree. We’ve been scraping oil off the tree bark and looking at it.”

In the 9 years since the Kalamazoo spill, the bitumen created a hardened hydrocarbon layer on the bark. “The compounds that make up this material as it gets weathered has really no great affinity…to do anything but be stuck to the tree,” he said.

As the bitumen dries out, it’s less likely to leech toxic chemicals into the environment.

“On the flip side, we’re not talking about the diluent, which does have compounds that potentially have a much greater chance for injury,” he said. “They’re also ones that would be more likely to dissolve in or find themselves preferentially enriched in water…and they also have a lot of bioactive punch that could impact the wildlife around that area.”

However, the diluent’s potential toxicity “has to be put in the context of who will be there to be potentially exposed and for how long,” Reddy said. Last week’s spill occurred about 5 kilometers northwest of Edinburg, N.D., a not-farm-heavy town of less than 200 people.

Not the First Spill

“Cleanup is progressing pretty well,” said Karl Rockeman, director of water quality with the North Dakota Department of Environmental Quality. “As of [6 November], they had recovered approximately 6,000 barrels of oil.” TC Energy updated this recovery estimate to 6,800 barrels, or about 75% of the total spill volume, on 7 November. Teams are now excavating the damaged pipe for an off-site investigation into what caused the leak.

“There has been air and water monitoring in place cooperatively between ourselves and the responsible party,” Rockeman said. “To date, none of that monitoring has shown any public health impact off of the site. It’s not showing the impact of the oil is moving off of the site. That’s also very good news.”

“We don’t fully understand the damage that diluted bitumen causes to wetland ecosystems.”

However, “we don’t fully understand the damage that diluted bitumen causes to wetland ecosystems,” Orihel said, so it’s difficult to know whether lasting damage has already been done to the affected wetlands despite the quick response time.

TC Energy initially estimated that the Keystone Pipeline would leak about 50 barrels every 7–11 years. This is the fourth spill in 9 years in the existing pipeline, each of which has spilled hundreds or thousands of barrels. The Edinburg spill has amplified the voices of indigenous peoples, affected residents, and environmental activists who continue to protest the approved Keystone XL expansion, scheduled to begin construction in 2020.