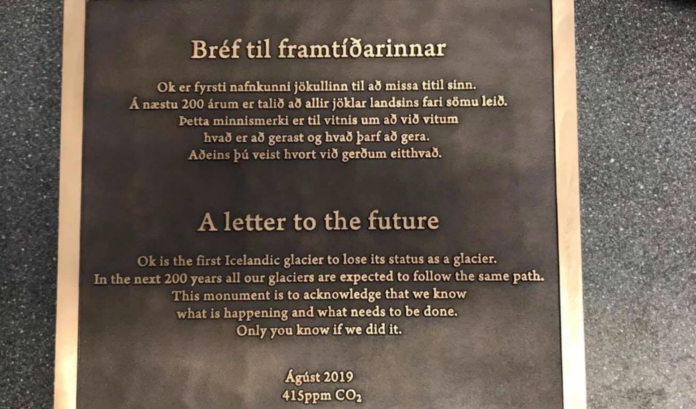 That may sound like an Onion headline, but alas, it is not. We’ve reached the point in our wild planetary experiment where humans are memorializing the things we’re knowingly wiping out.

Iceland has lost its first glacier to rising temperatures. Now, scientists from Rice University and Iceland are planning to install a plaque near the sad pile of ice and snow formerly known as Ok Glacier. The researchers say it’s the first memorial to a disappearing glacier, but climate change ensures it almost certainly will not be the last.

Glaciers are more than just ice. They’re defined by receiving more mass from snow than they lose from summer melt, which allows them to slide down mountains and grind up rock. Climate change has, of course, changed the equation by causing more glacial melting, causing ice to recede around the world. An increasing number of glaciers have turned into stagnant, rotten ice patches or disappeared completely. The OK Glacier reached the latter status in 2014, making it the first glacier in Iceland to disappear. Researchers expect all glaciers to melt away by 2200 on the island, which led to them memorializing Ok.

The plaque will be installed on August 18 near Ok’s former stomping grounds in western Iceland. The plaque contains a melancholy message for future generations:

Ok is the first Icelandic glacier to lose its status as a glacier. In the next 200 years all our glaciers are expected to follow the same path. This monument is to acknowledge that we know what is happening and know what needs to be done. Only you know if we did it.

It also includes the figure “415 ppm,” a reference to the amount of carbon dioxide in the atmosphere recorded in May this year. Because the world keeps emitting carbon pollution, that record will be broken next year. But putting it on a plaque is perhaps the most poignant reminder of the choices we face. And this summer is a particularly somber atmosphere to do it.

The northern parts of the globe have borne the brunt of the rapid rise in carbon dioxide, warming twice as fast as the rest of the world. This summer has been one for the record books in particular, with Arctic heat helping drive this June to be the hottest June ever recorded. July is slated to follow suit and quite likely become the hottest month ever recorded on Earth. From Canada to Alaska to Siberia to Greenland, the impacts of the rising heat have become clearer than ever this summer. Installing an ode to a dead glacier in Iceland is the perfect eulogy to the increasingly imperfect world.