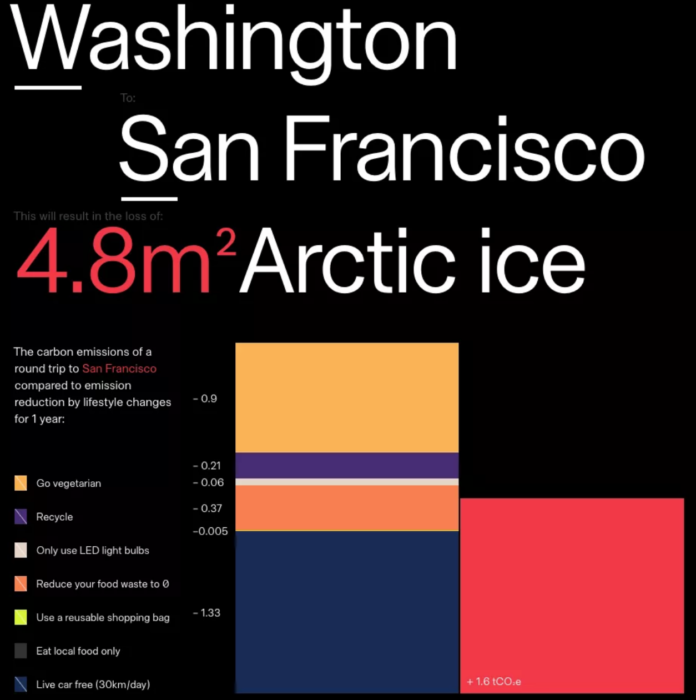 Demand for air travel is growing around the world, with the number of passengers poised to double over the next 20 years. At the same time, we’re beginning to reckon with the enormous environmental consequences of so much air travel. Each leg of a trans-Atlantic flight emits about one ton of carbon dioxide per passenger, as well as a number of other heat-trapping chemicals. The desire to fly weighed against the harm it does to the climate has fueled a global flying shame movement that’s taken off in recent years.

Swedish digital designer Victor Müller was grappling with his own anxieties about climate change last year. He saw reports that the planet was running out of time to limit warming this century. He also saw a rising tide of global youth activism spurred in part by a fellow Swede, 16-year-old Greta Thunberg. That made him take a look at his own impact on the world.

Müller, 35, examined his habits and crunched the numbers. He had given up meat, reduced his use of plastics, and brought reusable canvas bags when he went shopping. But when he tallied up his efforts next to his air travel, the numbers were “shocking and paralyzing,” he told me.

It was clear that if he wanted to shrink his carbon footprint, he’d have to fly less. Looking at the literature, he found research that showed a direct link between air travel and the loss of Arctic sea ice.

Alongside developer Dennis Mårtensson, Müller launched a website, Shame Plane, to help others understand the impact of our air travel.

Enter your departure city and your destination and the website gives you the carbon emissions of your flight, as well as how much Arctic ice it would melt. The site also compares the flight to individual actions that reduce emissions like using LED bulbs, going vegetarian, and giving up driving.

Playing with the calculator, the impact of flying becomes clear. It also shows that reducing air travel is one of the most effective ways to reduce your greenhouse gas emissions.

Plenty of other websites out there offer calculators for your carbon dioxide footprint, often with the motivation to sell you carbon offsets (the Environmental Protection Agency’s calculator ignores air travel completely). But Müller’s Plane Shame site zeroes in on what’s often the largest single contributor to an individual’s impact on the climate and shows just how hard it is to compensate for it. He notes that the site was intended mainly as a design demonstration and wasn’t meant for public consumption. And he said he’s not trying to guilt anyone into taking a train.

“I never meant to shame anyone when I built it, but if you can justify flying like there is no tomorrow, then good for you, let me know your secret,” he said.

A growing number of travelers are feeling “flying shame”

Sweden has become the epicenter of the flying shame movement, or flygskam, as it’s called in Swedish. But concerns about air travel are spreading around the world, among activists, scientists, and ordinary people.

Right now, air travel contributes just 2 percent of global greenhouse gas emissions, so the hand-wringing about planes may seem overwrought. However, that number is poised to surge in the coming decades as economies grow, ticket prices fall, and more people can afford to fly.

And there are few options right now to decarbonize air travel. Technologies like electrification and carbon-neutral biofuels are decades away from reaching the scales needed to make a dent in the rising emissions from aircraft. So right now the most effective way to curb climate impacts from flying is simply to fly less.

Another factor behind flight shame is that a minority of people are doing the majority of flying. Fewer than half of Americans fly at all in a given year, and around the world, only one in five people have ever flown.

205 people are talking about this

But flying shame raises a bigger issue about the fight against climate change. On the one hand, the biggest, most meaningful reductions in carbon dioxide emissions will have to come from policy changes, like requiring utilities to use more clean energy and creating incentives for farmers to switch to more sustainable agricultural practices.

And many environmental activists make the case that the focus on individual actions in mitigating climate change serves as a distraction from the work required from governments and corporations.

However, Müller argues that what you do does matter because your actions create the demand for the major shifts needed to curb warming.

“Every corporation [has] end-consumers, and a citizen in a free market [has] a vote in how those corporations behave,” he said.

And as far as individual actions go, how you travel is one of the most consequential for the planet. Whether or not you choose to feel guilty about it, it’s worth giving it some thought.

Walk Out: Texas Democrats Block Passage of Voter Suppression Bill by Leaving Capitol Ahead of Vote

“We Are a Plutocracy”: Jeffrey Sachs Slams Biden for Offering to Preserve Trump's Corporate Tax Cuts