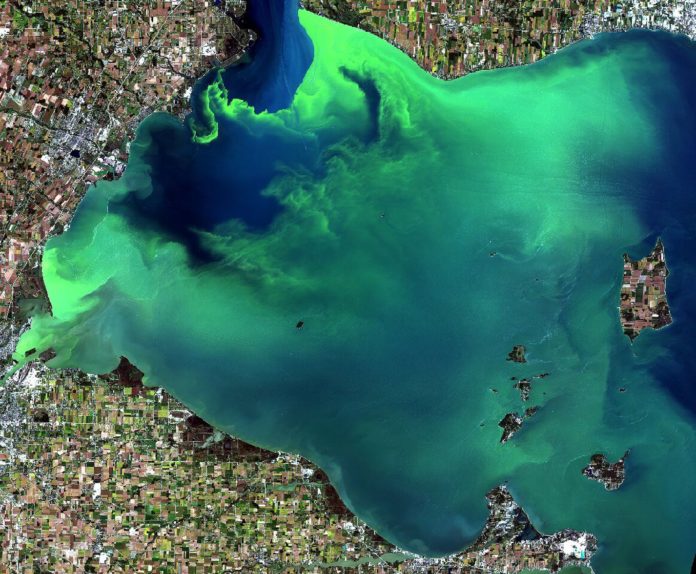 In early July, a bloom of toxic blue-green algae forced Mississippi officials to close 25 beaches and warn any would-be swimmers from making contact with water along affected stretches of its Gulf Coast.

Around that time, researchers in Ohio predicted Lake Erie would be coated by a significant plume of harmful algae this summer while researchers from Florida used satellite images to document the world’s largest macroalgae bloom—a swath of brown seaweed so large it’s visible from space. Also in July, Vermont officials attributed the death of two dogs to the ingestion of harmful algal bloom toxins.

Suffice it to say: Parts of the country have entered peak algal bloom season.

But under the wrong conditions—warm water, too much sunlight, and excess nutrients from agricultural or sewage runoff—some species of algae can multiply uncontrollably, forming green, red, blue-green, or brown masses that smother the surface of waters and can produce potentially dangerous toxins.

Just as tiny droplets collect into cloud, microscopic algae congregate into blooms that can be seen from space. Every year, harmful algal blooms (or HABs) force beach closures, contaminate drinking water, and sicken people and their pets.

As climate change progresses, scientists expect harmful algae blooms to become more frequent and severe, according to the National Institute of Environmental Health Sciences. Already, reports of HABs in waters around the U.S. and across the globe have risen in the past four decades.

“The problem has expanded dramatically,” says Don Anderson, director of the U.S. National Office for Harmful Algal Blooms and a senior scientist at the Woods Hole Oceanographic Institution. Part of that expansion is due to advances in our understanding of toxic algal species, as well as our grasp on their ecological and economic cost; today, we know a diversity of harmful algae blooms occur in every state and across all seasons. “It’s spread out all over the country,” he says.

Not all algal blooms are created equal. Some just stink up lakes and ponds, but others pose a health risk or have cost coastal economies millions of dollars, according to the National Oceanic and Atmospheric Administration.

Tens of thousands of algal species float across the planet’s waters (with the highest estimates suggesting the existence of one million species of algae). Of those, several hundred species are reported to form large blooms—and nearly one-fourth of those are known to produce harmful toxins, according to the Intergovernmental Oceanographic Commission of UNESCO.

“There are many that cause harm—but it’s a small fraction of what’s out there. They’re not the only algae in the water,” Anderson says. “It would be like looking at a big city and saying you want to study the health of people who are Swedish.”

In freshwater lakes and rivers, harmful algal blooms often consist of cyanobacteria, which can produce toxins that pose a health risk to humans and wildlife.

Bodies of freshwater in all 50 states.

They are primarily a public health concern, as they can produce hazardous toxins—notably the neurotoxin microcystin, which destroys mammalian nerve tissue.

In 2014, a harmful blue-green algae on Lake Erie, near Toledo, Ohio led to microcystin levels in high enough concentration that officials advised half a million residents not to drink tap water for three days. In 2018, officials in Iowa found microcystin in the raw water supplies of 15 out of 26 public water systems tested.

Cyanobacteria blooms—which form thick, green mats—can also wage ecological harm by making it difficult for aquatic life to thrive. For one, they can block sunlight for creatures below the water’s surface. They can also use up the oxygen needed by other life forms, creating oxygen-depleted “dead zones.”

And its economic costs are well-documented: Local governments need to treat cyanobacteria-contaminated drinking water, and regional tourism often takes a hit when people are kept from fishing, swimming, boating, and beaching.

There are several species of microscopic algae that fall under the umbrella term of “red tide.” Most often, the term “red tide” refers to Karenia brevis, an algal species which has bloomed and caused issues since 1971, when it cost an estimated $116 million in beach cleanup costs and losses to the tourism and fishing industries in the Gulf of Mexico.

Red tides also pose a danger to humans and marine life. In people, red tide can cause respiratory illness and irritate the eyes. It can be lethal for marine life.

Red tides made up of diatoms, a common group of algae, like Pseudonitzschia can produce the neurotoxin domoic acid, which can cause seizures in birds and some other vertebrates. Domoic acid can also accumulate in shellfish, sardines and anchovies and can cause serious injury or death in sea lions, otters, birds, and humans that eat them (in the summer of 2015, officials in Washington, Oregon, and California closed shellfish fisheries due to high concentrations of domoic acid—costing coastal communities and fisheries tens of millions of dollars).

In 2013, a red tide of Karenia brevis killed an estimated 277 Florida manatees, which are a threatened species. Two years earlier, Texas officials banned oyster harvesting for half the industry’s 6-month season—dropping landings by $10.3 million compared to the previous year—due to a Karenia brevis tide.

Three other dinoflagellates—Alexandrium fundyense, Alexandrium monilatum, and Alexandrium catanella—are known to disrupt fisheries from the Gulf of Maine to the Caribbean, Gulf of Mexico, and eastern Pacific Ocean.

Golden alga (Prymnesium parvum) is a single-celled organism that lives in water. It occurs worldwide, primarily in coastal waters, but it’s also found in rivers and lakes.

Across 23 states, from Washington state down to the Gulf Coast and along the Eastern Seaboard up to Maine.

The toxins produced by blooms of golden algae affect organisms with gills—so while humans can breathe easy, it is a potential danger to fish, mussels, clams, and some juvenile amphibians, according to Texas Parks and Wildlife. Cattle, predators, scavengers, and birds have been observed drinking water during a bloom—and some people have eaten dead fish from associated fish kills—with no apparent effects.

Still, it can take years for a water body to recover from a major fish kill caused by a toxic golden alga bloom, according to TPW.

Brown tides are caused by one of two algae species—Aureococcus anophagefferens and Aureoumbra lagunensis—give rise to brown tides. Each species, when they accumulate in high enough densities, turn water dark brown.

Long Island and the Gulf of Mexico (Cuba, Florida, and Texas).

While brown tides don’t produce harmful toxins, they do cause ecological harm by blocking sunlight and killing seagrass (along with the juvenile shellfish that live there).

Unlike microscopic algae that only become visible to the eye when amassed like a giant carpet, macroalgae are much larger and more like seaweed. They’re also a natural feature of freshwater and marine bodies.

Coastlines along the U.S.

Again, most differ from toxic phytoplankton blooms because they are not chemically dangerous (an exception: exposure to Lynbya majesculacan lead to skin rashes among other health issues for humans or animals).

Mostly, though, their impact is ecological.

Blooms of red, brown, and green macroalgae outcompete seagrasses and coral reef habitats and reduce the amount of light available to the bottom of bodies of water.

Earlier this summer, new satellite data revealed that expanse of “great Atlantic Sargassum belt” spans hundreds of miles, forming a massive mat of brown seaweed from the west coast of Africa to the Gulf of Mexico.

It threatens to coat 180 miles of beaches along the Caribbean coast of Mexico, where it has spoiled beachgoing. A recent study reported that 78 species of mostly fish and crustaceans died during a 2018 Sargassum tide in Mexico.

Some new research, including a paper published this month by researchers from Saudi Arabia, suggest one unexplored benefit of macroalgae: carbon sequestration. According to the paper, a majority of drifting, carbon dioxide-capturing seaweed sinks to ocean depths, “meaning that this captured carbon is unlikely to return to the atmosphere.”

The future of algal blooms

Human-caused climate change will shape harmful algal blooms of the future—possibly by increasing their prevalence and expanding their spread. But scientists can’t say for sure exactly how extreme weather events, warming waters, ocean acidification, and eutrophication will change the phytoplankton communities of our marine and fresh waters.

“Scientists are left mostly to ‘informed’ speculation,” wrote a group of researchers from Sweden, Canada, Japan, South Africa and the U.S. in a 2015 paper on the unknowns of climate change and harmful algal blooms.

There have been plenty of obstacles to HABs research, says Anderson, who has been studying them for more than 40 years. For one, analyzing their distribution can be difficult: while blooms can stretch hundreds or thousands of miles, Anderson says, they don’t always appear in the same place at the same time year after year. It’s also taken decades to develop technology to identify specific algal species, models to predict potential blooms and bobbing robotic biosensors to form a network of aquatic observation stations.

So while it’s too soon to predict their future, Anderson says, “we can start to expect much, much better monitoring and detection.”