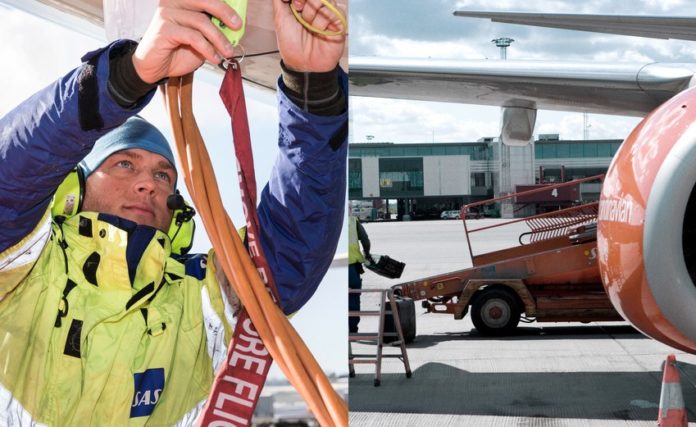 Time in between flights can be crucial for an airline. The longer ground crews and flight attendants take to turn around a plane for the next flight, the angrier departing passengers get. Not to mention that airlines have razor-thin profit margins, which is why each little penny or second of time saved is paramount to overall success.

But what happens onboard the aircraft after passengers have deplaned? Once a plane exits the runway, the clock begins, and each airline has its own process for how things should go. There is a vast array of tasks that need to be completed in this short window, including cleaning, restocking catering, and safety checks. SAS Scandinavian Airlines’ hub at Stockholm Arlanda Airport in Sweden is a great example of how airlines keep planes flying with minimal ground time while operating in a sustainable manner.

We watched one SAS plane arrive and depart from its gate to understand how airlines execute the plane turnaround process like a science.

9 a.m.: Flight SK 1416 from Copenhagen lands in Stockholm and taxis to the gate where it will quickly prepare for its next flight, SK 535 to Dublin. The plane lands a few minutes late, shaving off precious minutes to get prepared for the next flight, but the ground crew are pros and will make up for lost time. (The airline’s ground crews have already had a meeting that day to prepare for early or late arrivals, and were briefed on potential maintenance issues.)

9:01 a.m.: As the plane taxis to the gate, the captain has shut down one engine to save fuel and cut down on carbon dioxide emissions. This, however, does not slow the aircraft.

9:03 a.m.: Once parked, the second engine is shut down as soon as the plane is plugged into ground power. A choreographed ballet of activity takes place. Cleaners get to work inside, caterers unload trash and board refreshments, lavatory tanks are emptied and refilled with water, mail and cargo are offloaded with baggage, and passengers disembark. Bags are divided onto carts for connecting flights versus those headed for baggage claim in Stockholm.

9:18 a.m.: The 174-passenger Airbus A320neo is one of the airline’s newest planes, and it is known for its eco-friendly design using less fuel than other aircraft its same size. This means the next Dublin flight requires less time to refuel. Additionally, flying faster uses more fuel. This is why airlines sometimes intentionally fly slower if there is enough time to reach the destination on time.

9:20 a.m.: Between each flight, the cockpit crew performs a walk-around to inspect the plane for any issues while cabin crew check safety and catering equipment. The same pilots and flight attendants will operate the next flight (crews that stay with the same plane save turnaround time). A ground crew leader speeds everyone up as the digital clock on the wall ticks down the seconds left for an on-time departure.

9:22 a.m.: Inside the terminal, staff make final boarding calls. In fact, they begin boarding passengers into a section of the jet bridge earlier to save time. Fliers wait there until cleared to board once necessary aircraft checks are complete. There is no lag time, and eventually, the all-clear is given to passengers to board.

9:31 a.m.: Ground staff await a connecting passenger, and if he does not arrive, his bag will need to be offloaded for security reasons. Since that takes time, a decision has to be made quickly. Otherwise, a trickle-down delay will affect further flights. In the meantime, a tug has been attached to the front wheels to be ready to push the plane back.

9:33 a.m.: There is a time limit on deciding whether to remove the late passenger’s bag. Luckily, he shows up, and the plane’s passenger and cargo doors close.

9:35 a.m.: Pilots communicate with the control tower for permission to depart. The tug begins pushing the plane back, the pilots start the engines, and they proceed toward the runway for an on-time departure. It took just half an hour to turn the plane around.

How the airline turnaround process can help sustainability efforts

Studies show fuel emissions can be reduced during the turnaround process, therefore making each flight more sustainable. For instance, the faster an engine is shut down and the plane is connected to ground power, the less emissions are released as crews ready the aircraft for the next batch of passengers.

SAS makes sure that someone is in position as the plane taxis so that the moment the plane stops, ground power can be connected within a second. Those catering trucks also have an impact because everything they load adds aircraft weight—additional weight means burning more fuel—and time to the turnaround process. The airline has made some atypical catering decisions on its intra-European routes as a result.

Like many airlines, SAS sells food and drinks to its economy passengers while offering free meals and drinks to premium economy (SAS Plus) fliers. But, the carrier is studying how to create an online option for passengers to opt out of having an in-flight meal. This reduces food waste, turnaround time, and airplane weight, which in turn saves fuel.

The New Nordic by SAS menu also changed how food was packaged into uniquely shaped cubes that take up less space in the service carts and are easier and faster for caterers to load onto the plane. Even the box is produced from eco-friendly material, and cabin crews help to divide recyclable items from other things, so that they can be offloaded and processed more efficiently.

According to Gustaf Öholm, the SAS commercial head of onboard products and services, the airline has created a “stop, reduce, replace” policy that looks into any item that can help reduce weight, save fuel and wasteful emissions, and get planes turned around faster. This includes things like newspapers and magazines, which are no longer stocked on board—they often needed to be replaced at each stop, adding complexity to the turnaround process. Now, an even larger selection is available via download on the airline’s app.

Duty-free sales were also nixed, since the heavy carts loaded with products were hardly eco-friendly. Without having to restock these items (and do the necessary paperwork that is involved in verifying what was sold and proper currency recorded), the plane can turn around even faster. (Most people shop in the terminal anyway.) Simple ideas like these can make a big difference on turnaround time and an airline’s bottom line. Even better, they can make a difference for the environment, too.