Ari is the city’s latest cool neighborhood both to live in and visit. A plethora of restaurants have opened their doors within the past few years, while the area boasts of having both delicious streetside eats, in addition to some of the most luxurious restaurants in town. Ari also has plenty of coffee shops to choose from. Whether visitors are long-term residents or short-term travelers, this is a great neighborhood to frequent.

A close contender for first place when it comes to trendiness, is the neighborhood of Thonglor. Firstly, it is close enough to all the downtown action without falling into the seedier parts of the city. It is also a taxi ride or Skytrain station away from some pretty cool places, including Benjasiri Park. In addition to its central location, Thonglor also runs right into the khlongs (canals), the waterways which allow visitors to see the city in a truly unique way. These canals help commuters beat Bangkok’s standstill traffic, whether they are headed to Khao San Road or a shopping mall. This neighborhood also has everything one needs to enjoy Bangkok after dark, from gaming bars to pulsing nightclubs.

A mere one stop from Thonglor via Skytrain is Ekkamai. This neighborhood may lack a proper club or the bad and boujee feeling one gets when in Thonglor, but it is a great place to reside and visit. Firstly, everything from the food to the housing is cheaper in this neighborhood. Thonglor tends to get a bit expensive, and it can be nice to escape the high price tags without having to venture too far from the city center. Secondly, Ekkamai has everything one needs to pass the time, from a proper shopping mall to a surplus of coffee shops. Ekkamai is also home to one of the busiest bus terminals in town, making it a great place for those travelers on the go.

Banglamphu is one of the top neighborhoods to visit while traveling through Bangkok. This is because this neighborhood is home to one of the most infamous streets in the city: Khao San Road. This particular stretch of road is not just for those backpackers hoping to booze, as it is lined with tons of street food, hippie market finds, live music, and more. Those hoping to see a more authentic side of Banglamphu might instead visit one of the temples in the area, including Wat Saket where the Golden Mount is found, or Wat Suthat.

Just adjacent the neighborhood of Banglamphu is Thonburi, a riverside district with a number of things to see and do both on and off the usual tourist itinerary. Thonburi may some familiar to some, and that is because this district is home to one of the top sights in Bangkok: Wat Arun, otherwise known as the Temple of the Dawn. Tourists may feel as though their visit to Thonburi is finished after laying their eyes upon this towering, riverside temple, however, there are more interesting sites worth visiting. In addition to Wat Arun, the Royal Barges National Museum, as well as the more cringeworthy Siriraj Medical Museum, are both found in Thonburi. Do not miss checking out the khlongs(canals) while visiting this historic part of town, as it is one of the most interesting and fun ways to explore the city.

Visitors to Bangrak go for the food, but they stay for the nightlife. Many of the best eats in town are located right off the BTS Skytrain Station Sala Daeng. From bakeries to Instagram-worthy restaurants, this neighborhood never fails to please travelers with an appetite. Bangrak is home also to some of the best nightlife activity in the city. Sure, the area can get a bit sketchy at times, as this is where the infamous Patpong Night Market is found. The top reason to visit Bangrak, however, is to party on Silom Soi 4. The street is absolutely packed with gay bars, many of whom put on a cabaret show of sorts. This neighborhood is also home to the most popular gay nightclub in town: DJ Station. Those looking for something a little less urban might instead walk to Lumpini Park, famous for the number of monitor lizards that reside there. 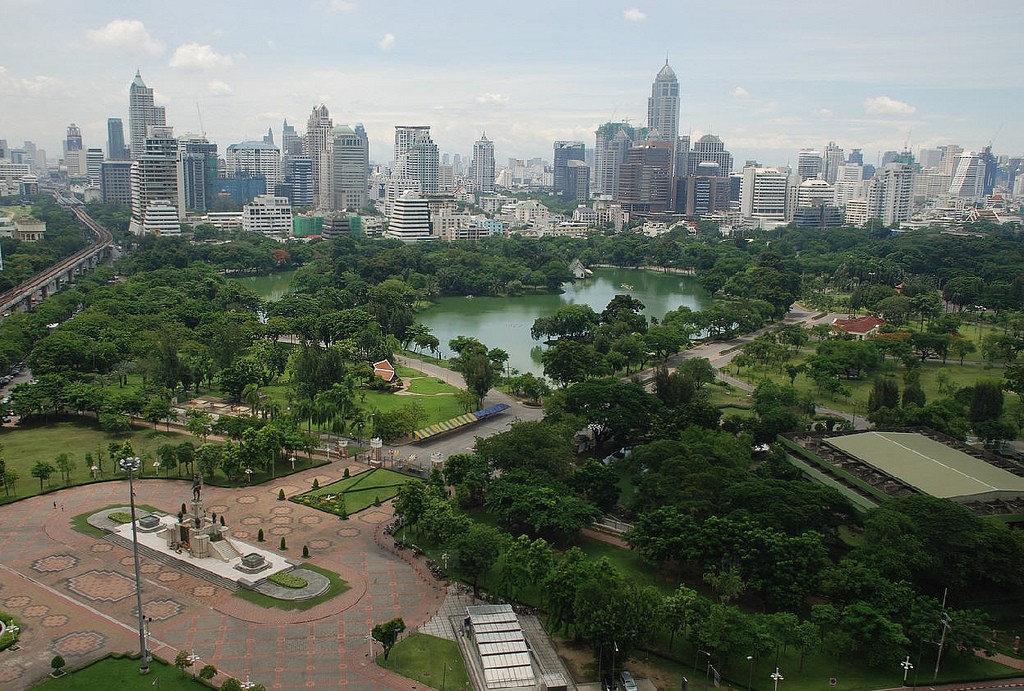 Taking the title of the oldest area in the city is Chinatown. This neighborhood is the perfect combination of chaos and excitement, with enough things to see and do to keep even the most motivated of traveler busy. There are quite a few Chinatowns in the world, but Bangkok’s is the largest and arguably the most unique of them all. The top reason to visit Chinatown is the food. While there are some sketchier dining options for sure (shark fin soup shops are in abundance, for example), the main street of Chinatown, otherwise known as Yaowarat Road, is lined with vendor after vendor of delicious eats after dark. If you are not sure which vendor to select, simply follow the herds of Thai people to decide which place has the most mouthwatering of eats. There are also a handful of temples and shrines worth visiting in this area. Chinatown is south of the Grand Palace and also sits along the Chao Phraya River.

Phra Khanong may seem dead at first, but after stepping off the train from its pretty central location, visitors will be pleased to see that there are plenty of things to see and do in this otherwise off the radar neighborhood. One of the most noteworthy qualities of Phra Khanong is the large, outdoor communal area that is open every night. Otherwise known as W District, this is the perfect spot to gather around with friends and have a few pre-drinks before taking on a large nightclub with much steeper prices. It is here that visitors will find a large expat community largely due to the fact that this area is one of the cheapest areas to rent an apartment and still considered downtown. The area may lack greenery, but it makes up for it with its art spaces, distinct nightlife, and visitors will even find a rooftop bar and board game cafe in Phra Khanong.

Victory Monument seems like a relatively normal part of town until visitors explore it properly. In addition to two malls, this area is also home to an attractive small green space, otherwise known as Santiphap Park. Visitors will not find many other tourists here, unless they make their way to Saxophone Pub after dark. This bar hosts a handful of live musicians every night. The drink prices are pretty steep but the atmosphere and music are well worth paying for. In addition to its handful of venues geared towards nightlife, some of the best street food in the city can be found here.

Those looking to avoid the tourist-ridden markets of Bangkok should head for Huai Khwang. It is here they will find an authentic and noteworthy night market, otherwise known as the Huay Khwang Night Market. In addition to the bazaar, this area is known for its delicious, 24-hour streetside restaurants, many of which serve up nothing other than traditional Thai food. This area is also easily accessible by the MRT Subway.

NASA’s launching a mission to crash something into an asteroid

Payments From Gaetz to Indicted Official Prompt Call for Resignation

Defense Department accuses Huawei, along with 19 other top Chinese companies, of having links...