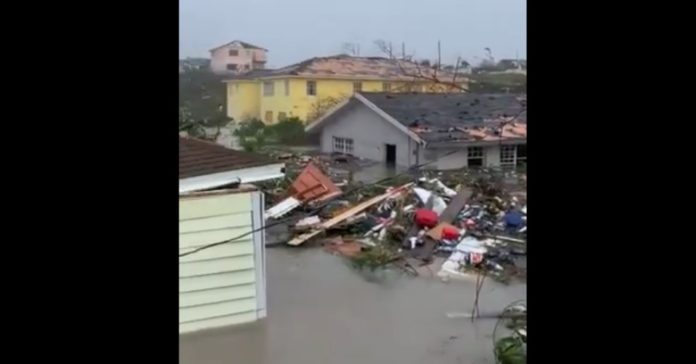 Videos posted online late Sunday and early Monday provided the first glimpse of the scale of destruction Hurricane Dorian—a historic Category 5 storm—left in its wake in the Bahamas as it slowly moves toward the southeastern coast of the United States, forcing nearly a million residents of Florida, Georgia, and the Carolinas to evacuate.

“I have seen utter devastation here… We are surrounded by water with no way out,” said ABC News correspondent Marcus Moore, who was on the ground in Marsh Harbour.

“Absolute devastation, there really are no words,” said Moore, surveying destroyed homes and buildings. “It is pure hell here on Marsh Harbour on Aboca Island in the northern part of the Bahamas.”

The Guardian characterized Dorian as “the biggest storm to hit the Caribbean island chain in modern times,” with wind gusts reaching as high as 220 mph.

During a press conference Sunday, Bahamian prime minister Hubert Minnis saidDorian “will put us to a test that we’ve never confronted before.”

“This is probably the most sad and worst day of my life to address the Bahamian people,” said Minnis. “I just want to say as a physician I’ve been trained to withstand many things, but never anything like this.”

According to the National Hurricane Center, the storm remained at Category 5 strength Monday as it drifted over Grand Bahama Island, unleashing heavy rainfall and severe wind.

“This is a life-threatening situation. Residents on Grand Bahama Island should not leave their shelter when the eye passes over, as winds will rapidly increase on the other side of the eye,” the center said. “These hazards will continue over Grand Bahama Island during most of the day, causing extreme destruction on the island.”

Forecasters on Monday said the storm could get “dangerously close to the Florida east coast” as early as Monday night.

Florida, Georgia, North Carolina, and South Carolina have declared a state of emergency as the hurricane crawls toward the U.S. coast.