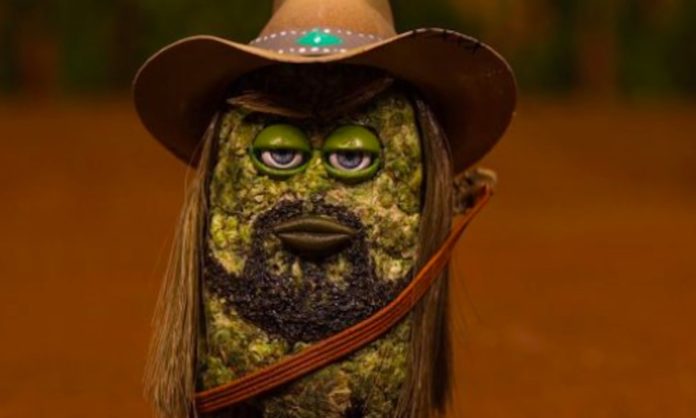 What’s in a name? If we’re talking about cannabis strain names, the answer is a lot of inspiration. At least that’s the way that Mikey Peterson of Denver, the creator of the animated series Nug Nation, sees things anyway.

Peterson, an admitted life-long animation nerd, had been doing film and video production for 20 years when he decided it was time for a change from producing mundane projects for corporate clients. He saw the opportunity to do something new with the legalization of cannabis.

“Once recreational marijuana passed in Colorado, I decided to start my own creative agency to do cool creative concepts geared towards the industry because I wasn’t seeing anything like that at the time,” he explains in a phone interview with High Times.

The new agency, Nuglife LLC, first set its attention to cannabis content including videos about cultivation and infused cooking. Then Peterson had the idea for Nug Nation, a stop-motion animated series that brings the world of cannabis to life with characters based on the names of marijuana strains. Peterson says that he realized in 2015 that there’s plenty of fodder for the imagination in the names of pot varietals such as Alaskan Thunderfuck, among others.

“The way people are naming these strains lends themselves to characters automatically,” he says.

Peterson spent nine months producing the first Nug Nation video, using facial features made of clay attached to real buds of weed to create the animated characters. After the video was released in April 2016, he knew from the positive reaction the pilot received that he was on to something exciting.

“We dropped everything we were doing and went full time into animation,” Peterson remembers.

Nug Nation has evolved into a series of digital shorts featuring the voiceover talent of celebrities including Redman, Nappy Roots, Afroman, and Billy Ray Cyrus. The series revolves around the hilarious exploits of the residents of Nugville, all of whom are based on strain names. There’s Affy (Afghan Haze), Diesel (Sour Diesel), Cookie (Girl Scout Cookies), and Daddy (Grand Daddy Purple), and they’re all made with real weed. TV Anchor Bong Burgundy reports on the everyday drama going down in the pungent burg.

Taking two to three days apiece to create, each character is built with a ball-and-socket skeleton called an armature that facilitates movement. The armature is surrounded by a 3D-printed shell that is covered with actual cannabis before being dressed for its part.

Each episode requires a months-long process of scripting, voice-overs, storyboarding, set design, and character-building before the tedious process of stop-motion animation can begin. Thousands of individual photographs are shot for each scene, with the characters moved only slightly between each frame. After the photos are shot, there’s still post-production work including matching the motion to the dialogue and adding music and sound effects to do before the project is complete.

Besides being engaging entertainment, Nug Nation provides an opportunity for cannabis brands to reach consumers in a novel way. With the cannabis industry largely shut out of traditional advertising media due to regulations and continuing stigma, animated entertainment shared via social media can give companies a new avenue of exposure. Peterson is currently developing a project with rolling paper manufacturer Hempire that features joints instead of nugs as the main characters. An educational series titled Hemp 101, the show is slated to launch in the next month.

Nug Nation videos are available on the company’s website and YouTube channel and Peterson also has his sights set on streaming services and other opportunities.

“There’s always a plan to go bigger and do bigger and better things,” Peterson asserts confidently.