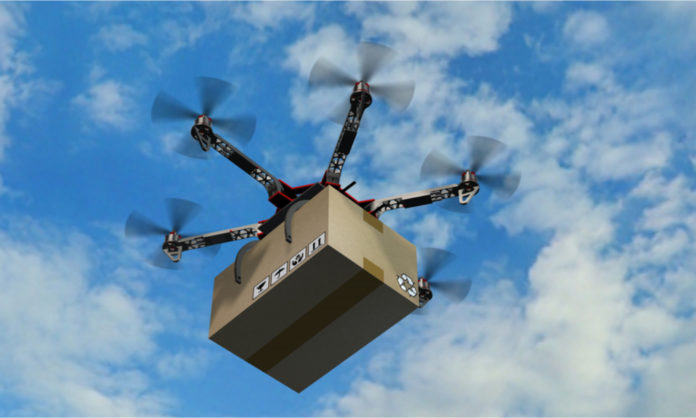 In an effort to save money on logistical costs, a cannabis company has announced its plans to deliver product to Seattle businesses with drones. The high-flying partnership was publicized last month by GRN Holding Corporation, which is carrying out the plan by purchasing the aggressively-named Bellevue, Washington company Squad Drone.

The drones could be hoisting marijuana above your head for test deliveries as quickly as February or March.

“We anticipate the entire industry will adopt this where applicable,” said GRN Holding Corporation CEO Justin Costello in a December press statement, which estimates that the drones will dramatically cut down on the costs associated with getting cannabis to where it needs to go.

“All the flights will be monitored by a command center in Seattle and operated by a licensed pilot,” Costello continued. “We expect hiring about 20 employees in the various cities to hook the drones into charge ports, calibrate them, and ensure the safety totes and computer systems pass flight requirements.”

The company is not the first to announce that it will be dabbling in drones to deliver products. Drones have already been delivering snacks and healthcare products in Christianburg, Virginia, as well as in countries such as Australia and Finalnd.

Amazon has been forecasting drone deliveries for years via its so-called Prime Air program. The mega corporation says that the air system will shave time off its deliveries to customers.

Drones have been hyped as an environmentally friendly alternative to ground deliveries, but the reality is that the veracity of the statement depends on certain factors. For one, where the energy comes from that is required to charge their batteries. They also may be more environmentally effective in certain types of delivery networks. Studies have shown that trucks, for example, may consume less energy when serving product to densely located destinations.

MarketWatch reports that GRN Holding has been in the process of testing and customizing six drones over the past year. The machines will be able to manage 40 kilograms of product, and are equipped to operate over a range of 10 kilometers, courtesy of a “GPS navigation system and digital signature interface.”

Currently, the drones are slated to distribute to other businesses, not individual customers. And yes, they’ll be able to take businesses’ money, thanks to the installation of an iPad with CannaTrac’s cashless payment system.

“Basically the cost to run and operate a drone is 1/10th of a van or sprinter,” said CannaTrac CEO Tom Gavin. “So this is not some move to change an industry on just policy or technology, this will change an industry based on safety and cost savings as well.”

A local radio host expressed his concern for the safety of the cannabis drones.

“I wonder how many young toughs out there are going to bring out the old slingshots and try and shoot down a drone carrying pounds of weed,” said Seattle FM show KIRO Nights host Aaron Mason. “I don’t know, but I assume someone has thought about this.”