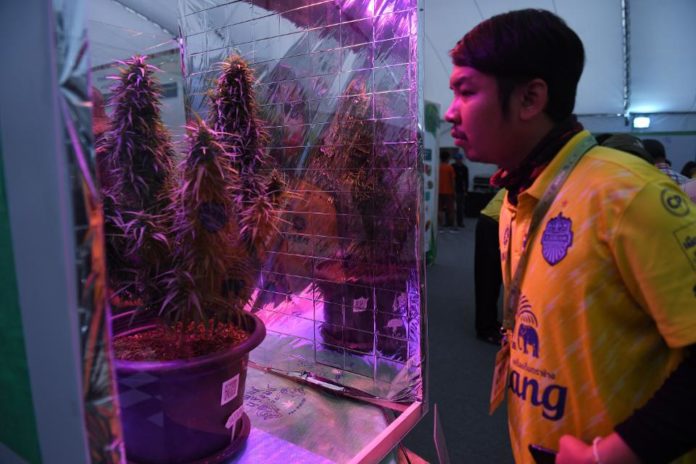 “We are in the process of changing laws to allow the medical use of marijuana freely,” said recently-appointed Health Minister Anutin Charnvirakul, in Bangkok on Wednesday. “We have high confidence that marijuana will be among the major agricultural products for Thai households. We are speeding up the law changes. But there is a process to it.”

Back in September, Anutin alluded, “In the near future, families will be able to plant cannabis trees in their back gardens like any other herb.”

In addition to the historic push for “home grow” regulations, Thailand has built what the government describes as the largest, industrial-scale medical marijuana facility in Southeast Asia.

On September 2, Maejo University researchers planted 12,000 new marijuana seedlings in northern Thailand’s Chiang Mai, while government officials looked on. The seedlings were provided by the government’s Department of Medical Service, according to the Asia Times.

The Government Pharmaceutical Organization (GPO) hopes to cultivate the plants to harvest enough ingredients to manufacture one million bottles of cannabis oil, each containing five milliliters, by February 2020.

Not a matter of politics?

“The university will be a center where ordinary people can learn how to plant and grow good quality cannabis. Cannabis is not an issue of politics; it is a product that can benefit people’s health,” Anutin said.

While Anutin claims that cannabis is not a political issue, he caused a commotion in advance of Thailand’s general election in March, by campaigning for the legalization of household cultivation. He led his middle-sized Bhum Jai Thai (Proud to be Thai) party’s campaign earlier this year during parliamentary elections by promising each household could cultivate six marijuana plants. Incidentally, his Bhum Jai Thai party is now part of the ruling coalition.

He also assured his voters of their economic advancement, by proposing the sale of each mature marijuana plant to the government for $2,225. Subsequently, a household could earn $13,350 for selling their entire allotment of six plants. Quite an alluring prospect, considering the average Thai salary is reportedly $8,200 per year, nationwide (or 24,000 baht per month).

Before Thai citizens get their hopes up over a potential green rush, cultivation experts caution that not every plant that reaches maturation produces medical-grade cannabis. Additionally, the ones that do are difficult to cultivate. Amateur cultivators could probably produce low-grade marijuana. However, without taking time to tend to the plants properly or invest in necessities such as nutrients and proper lighting equipment, the flower produced would potentially not qualify for medical use, purchasable by the government.

The arguments for adult-use:

If adult-use cannabis is allowed, private growers could earn more natural profits from the protean plant with less quality control.

Anutin predicts fully legalized marijuana would be a more significant and lucrative crop for Thailand than rice, sugarcane, tapioca, rubber, or other produce in his nation’s mostly agrarian economy.

He has suggested Thailand’s low wages could quantify competitiveness in international markets, compared to larger, foreign cannabis companies where manufacturing costs are significantly higher. Although, as the entire world seemingly races to market to capitalize on, and benefit from, the plant’s healing and profitable possibilities, up-and-coming competitors in Latin America, Africa and elsewhere in Asia, could outgrow Thailand.

Maejo University has reportedly developed a marijuana strain it calls “Issara” (independence), which offers 1:1 percentages of tetrahydrocannabinol (THC) and cannabidiol (CBD), according to the Asia Times.

Thailand became the first nation in Southeast Asia to legalize medical marijuana and kratom, in 2018. Adult-use cannabis remains illegal in the kingdom, with punishments including imprisonment. However, if Anutin keeps up the purportedly non-political momentum, that may soon be a thing of the past.