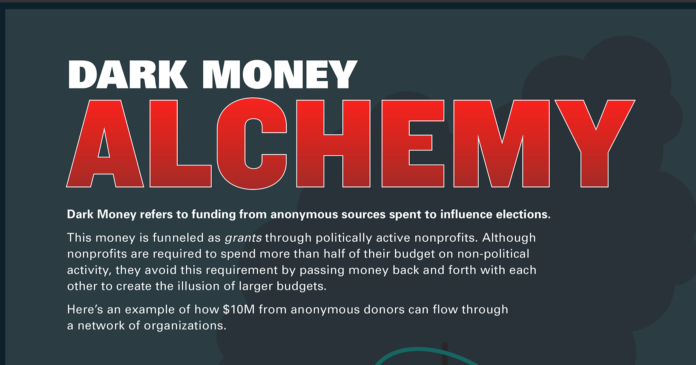 What is Dark Money?

Dark Money refers to political spending meant to influence the decision of a voter, where the donor is not disclosed and the source of the money is unknown. Depending upon the circumstances, Dark Money can refer to funds spent by a political nonprofit or a super PAC. Here’s how:

Dark Money groups account for staggering gaps in understanding exactly how each funding dollar is being spent during political elections. These gaps are becoming wider with every election cycle. Political organizations working to influence the 2016 elections outside party or official campaign structures spent more than $15 million in 2015, and only reported about $5 million of that to the Federal Election Commission (FEC). For comparison, that $5 million alone is more than ten times more than what had been reported at this point in 2011, before the last presidential election cycle. 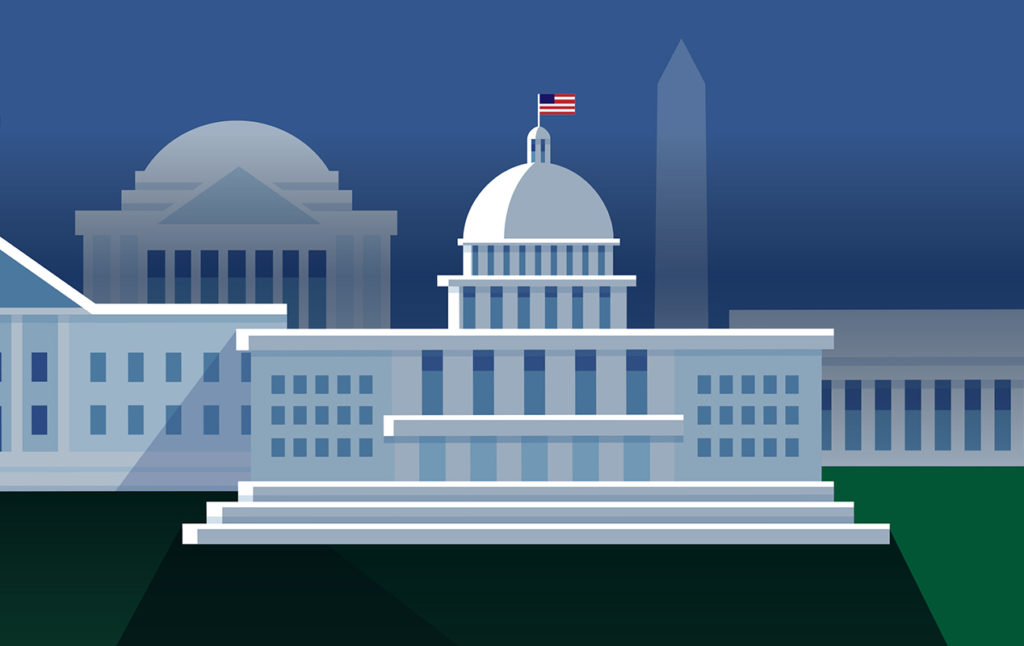 Political jargon can get confusing. What you need to know about spending to influence elections is that there are two main types.

With this kind of spending, donors must be disclosed, contribution limits apply and organizations are allowed to coordinate their efforts to help elect a candidate. This is not Dark Money. These groups include candidate committees, political parties, and traditional Political Action Committees (PAC).

Outside spending — sometimes referred to as independent or non-coordinated — spending refers to political expenditures made by organizations and individuals other than the candidate campaigns themselves. All outside groups that aren’t political parties — except for a few traditional PACs that make independent expenditures — are allowed to accept unlimited sums of money from individuals, corporations, or unions. With these donations, groups can engage in a number of direct political activities, including buying advertising that advocates for or against a candidate, going door to door, or running phone banks. However, these organizations are not allowed to coordinate their spending with political candidates or parties. While some outside groups — like super PACs — are required to disclose their donors, others are not. These nondisclosing organizations are referred to as Dark Money groups.

As the chart below illustrates, Dark Money groups are growing in size, scope, and share of election spending with each election cycle.

Whenever money is spent in a political election with the purpose of influencing the decision of a voter and the source of the money is not disclosed, it is Dark Money. The most common organizations shielding their sources of money are outlined in greater detail.

These are nonprofit, tax-exempt groups organized under section 501(c) of the Internal Revenue Code. These groups can engage in varying amounts of political activity. And because they are not technically political organizations, they are not required to disclose their donors to the public. These groups, like super PACs, cannot coordinate with political parties or candidates and therefore are allowed to raise unlimited sums of money from individuals, organizations and corporations.

One of the biggest problems with nondisclosure is that citizens who are barraged with political messages may not be able to consider the credibility and possible motives of the wealthy corporate or individual funders behind those messages.

There are a number of different types of 501(c) organizations; their structures, uses, and capabilities vary slightly. None of these organizations are required to publicly disclose the identity of their donors or sources of money.

Benefits of being a 501(c) organization/political nonprofit

The chart below illustrates the increased spending by various types of 501(c) organizations over the last several election cycles.

Technically known as independent expenditure committees, super PACs may raise and spend an unlimited amount of money and accept contributions from companies, nonprofits, unions and individuals.

Since super PACs cannot give money directly to candidates, they are exempt from the limits on fundraising and spending that regular PACs must abide by. Super PACs may raise and spend an unlimited amount of money and accept contributions from companies, nonprofits, unions and individuals.

Despite the sometimes inaccurate portrayal of them in the media, super PACs must identify all of their donors to the Federal Election Commission (FEC), and thereby to the public. They must do so on a monthly or semiannual basis in non-federal election years and monthly in the year of an election. In that sense, they are quite transparent, except when the donor is a shell corporation or a nonprofit that doesn’t disclose its donors. In these cases, they are Dark Money groups.

While super PACs are not allowed to coordinate any of their independent expenditures with a candidate’s campaign, many are run by people who are personally close to a candidate or formerly associated with a campaign.

A Carey Committee is a hybrid PAC that is not affiliated with a candidate and has the ability to operate both as a traditional PAC, contributing funds to a candidate’s committee, and as a super PAC that makes independent expenditures. To do so, Carey committees must have a separate bank account for each purpose. The committee can collect unlimited contributions from almost any source for its independent expenditure account, but may not use those funds for its traditional PAC contributions.

Limited Liability Companies (LLC) perform a number of necessary business functions. However, their unique structure can easily be abused or utilized in order to hide less than above-board activity. In politics, LLCs are sometimes established to help disguise the identity of a donor or source of money spent on behalf of a political candidate.

LLCs are governed by state law, but generally, minimal information is necessary to file the required articles of incorporation. While most states require the LLC name, address and a registered agent/founding member, in Delaware and a few other states an LLC can be incorporated without even having to name a registered agent.

The lax requirements surrounding LLCs have not gone unnoticed. A 2006 report by the Department of Treasury condemned their lack of transparency, especially in states that allow anonymous ownership, saying they are “inherently vulnerable to abuse,” and can facilitate the movement of billions of dollars for everything from credit card fraud to terrorist financing. These same loopholes have made LLCs attractive vehicles with which move political money into organizations while protecting the identity of the donor or source of money.

The 2012 case of W Spann LLC is an excellent example of how an LLC was used to enable an anonymous contribution from a wealthy individual that made its way into the presidential election. W Spann’s only business activity in the four months it existed was making a $1 million contribution to a pro-Romney super PAC, Restore Our Future PAC. That was just one of a handful of such contributions that have provided millions of dollars to super PACs over the last few cycles.

While some outside groups — like super PACs — are required to disclose their donors, others are not, such as 501(c)(4)s. Both types of organizations can engage in a number of activities, including buying ads that advocate for or against a candidate, running phone banks and making contributions to super PACs.

Even groups that are required to disclose their donors do not disclose them in real time. In many cases, much of the money that has been donated is not disclosed until long after the election cycle.

Feel free to distribute or cite this material, but please credit the Center for Responsive Politics. For permission to reprint for commercial uses, such as textbooks, contact the Center: info@crp.org

As Djokovic Leaves Australian Detention Hotel, Refugees Held There Urge World Not to Forget Them

This Vaccine Side Effect Can Affect Your Whole Body

These Are The Top 10 Destinations In The World Right Now, Awarded By TripAdvisor...

Everything Standing In The Way Of Federal Legalization In 2021