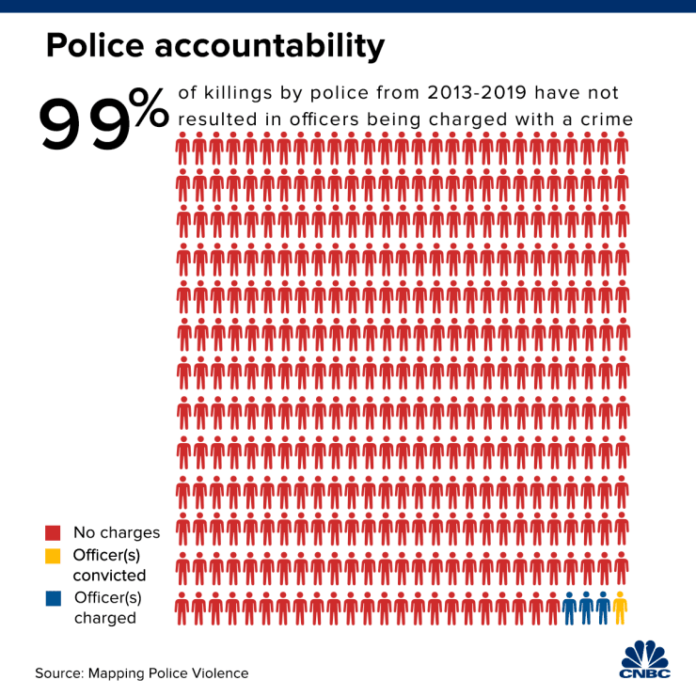 Protests over the death of George Floyd entered their seventh day on Monday as cities across the country imposed curfews and deployed police in riot gear to control demonstrators.

Floyd, a black man, was killed in police custody in Minneapolis one week ago. Video taken by bystanders showed a white police officer kneeling on Floyd’s neck as the unarmed man lay handcuffed and cried out that he could not breathe.

The officer, Derek Chauvin, has been charged with murder. The criminal complaint, issued on Friday, accuses Chauvin of having his knee on Floyd’s neck for eight minutes and 46 seconds, including for nearly three minutes after Floyd was nonresponsive.

WATCH NOW
VIDEO02:06
Scenes from protests, riots across the U.S. after killing of George Floyd

Chauvin and three other officers involved in the arrest have been fired.

The protests against police violence that have erupted across the country have mirrored those that followed the killing of Eric Garner in 2014. Garner, a black man, died after being choked by a white New York City police officer. Garner’s plea, “I can’t breathe,” became a rallying cry for the Black Lives Matter movement.

No comprehensive official database exists for tracking police violence, though there have been efforts at the federal level to create one. But data compiled by researchers have served as an important source of information about how often people in the United States are killed by police, and who is most likely to be killed.

Last year, more than 1,000 people were killed by police, according to Mapping Police Violence, one research group.

Scientists have struggled to study whether racial bias is directly responsible for the disproportionate killing of black people, given limited data on the race of those with whom police regularly come into contact.

Mapping Police Violence, which says that it is able to track more than 90% of killings in the U.S., defines a police killing as any time someone dies as a result of “being shot, beaten, restrained, intentionally hit by a police vehicle, pepper sprayed, tasered, or otherwise harmed by police officers, whether on-duty or off-duty.”

The data from Mapping Police Violence is sourced from three databases — killedbypolice.net, fatalencounters.org and the U.S. Police Shootings Database — as well as original research focused on social media, obituaries, criminal records databases, police reports and other sources, according to the group.

Three charts below characterize violence attributed to police, while a fourth depicts attacks carried out against police.

American police forces killed three people per day in 2019, for a total of nearly 1,100 killings.

Those numbers are far higher than in other wealthy western countries.

In comparison, The Guardian newspaper reported in 2015 that there was a total of 55 fatal police shootings in England and Wales between 1990 and 2014. Only 15 people were shot fatally by German police in 2010 and 2011 combined, the newspaper reported. The U.S. population is about six times that of England and Wales, and four times that of Germany.

There were only 27 days in which no police killings were reported, according to the data.

Killings per capita vary across cities

St. Louis is also significant because of its proximity to the site of one of the police killings that was key in catalyzing the Black Lives Matter movement. In 2014, Michael Brown, a black 18-year-old, was shot by the white police officer Darren Wilson in Ferguson, Mo., located about 10 miles outside St. Louis.

Wilson was not charged with a crime and a 2015 report by the Department of Justice found that his actions were not “objectively unreasonable.” But Brown’s killing, and the phrase “Hands up, don’t shoot!” became symbols of the Black Lives Matter movement that developed over subsequent years.

Despite the large number of police killings annually, police are almost never charged for excessive force violations. Between 2013 and 2019, 99% of killings resulted in no charges, according to Mapping Police Violence.

Prosecutors are often wary of bringing charges against police because of the steep hurdles to obtaining a conviction.

A doctrine known as “qualified immunity” also protects police from excessive force lawsuits in cases that don’t involve a “clearly established” violation of the law.

An investigation by Reuters published last month showed that, over the past three years, police won more than half of the excessive force suits in which they claimed qualified immunity, a sharp increase from prior periods. Qualified immunity was “making it easier for officers to kill or injure civilians with impunity,” the news service reported.

Hennepin County Attorney Mike Freeman, who announced the charges against Chauvin, acknowledged the difficulty of bringing charges against police officers in a press conference on Friday.

“This is by far the fastest we’ve ever charged a police officer,” Freeman said.

Floyd’s family has called for charges to be brought against the other three officers involved in his arrest, and for Chauvin’s murder charge to be escalated from third degree to first degree, which would carry steeper penalties.

Policing can be dangerous work. According to FBI data, 48 police officers were killed in the line of duty in 2019, with an additional 41 dying accidentally.

The agency reported that 40 of the victim officers were white, seven were black, and one was Asian.

Correction: An earlier version of this story incorrectly characterized the protection afforded to police by the doctrine of qualified immunity.

It’s Not All About Potency: What Cannabis Consumers Need To Look For In Their...

The Judge Who Illegally Jailed Children Is Retiring. The Candidates to Replace Her Have...