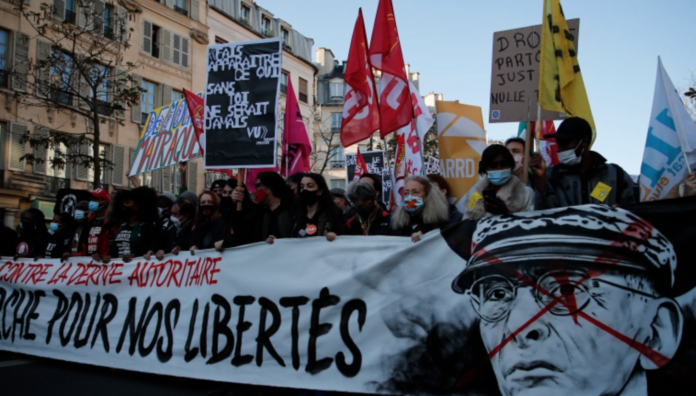 Police and demonstrators have clashed in Paris as tens of thousands took the streets to protest against new security legislation, a controversy intensified by the beating and racial abuse of a Black man by officers that shocked France.

The demonstrations against the security law – which would restrict the police officers’ faces –  took place nationwide on Saturday with 46,000 marching in Paris according to the government and several fires erupting after clashes.

The case of abuse shocked France with celebrities and politicians alike condemning the officers’ actions, and has brought the debate over President Emmanuel Macron’s law to boiling point.

Macron on Friday called the incident an “unacceptable attack” and asked the government to come up with proposals to “fight against discrimination”.

He said the images of the beating of Black music producer Michel Zecler by police officers in Paris last weekend “shame us”.

The incident has magnified concerns about alleged systemic racism in the police force.

There were tensions in Paris as a car, newspaper kiosk and brasserie were set on fire close to Place de la Bastille, police said.

Some protesters threw stones at the security forces who responded by firing tear gas, an AFP correspondent said.

Police complained that protesters were impeding fire services from putting out the blazes and said nine people had been detained by the early evening.

But Al Jazeera’s Natacha Butler reporting from Paris said “those were relatively minor incidents in what was a very peaceful protest”.

“Police everywhere, justice nowhere”, “police state” and “smile while you are beaten” were among the slogans brandished by protesters who marched from Place de la Republique to the nearby Place de la Bastille in Paris.

“We have felt for a long time to have been the victim of institutionalised racism from the police,” said Mohamed Magassa 35, who works in a reception centre for minors.

“But now we feel that this week all of France has woken up,” he told the AFP news agency.

“The fundamental and basic liberties of our democracy are being attacked – freedom of expression and information,” added Sophie Misiraca, 46, a lawyer.

An investigation has been opened against the four police involved in Zecler’s beating but commentators say that the images – first published by the Loopsider news site – may never have been made public if the contentious Article 24 of the security legislation was made law.

One of the most controversial elements of the new law is Article 24, which would criminalise the publication of images of on-duty police officers with the intent of harming their “physical or psychological integrity”.

Under the article, offenders could be sentenced to up to a year in jail, and fined 45,000 euros ($53,000) for sharing images of police officers.

It was passed by the National Assembly last week, but is awaiting Senate approval, sparking mass protests.

Protesters are calling for the article to be withdrawn, claiming that it contradicts “the fundamental public freedoms of our Republic”.

Thousands also took part in other marches in France including in Bordeaux, Lille, Montpellier and Nantes.

“I’m just waiting for the law to be withdrawn,” said Adele Lequertier, a 22-year-old sociology student, who took part in the Montpellier march.

In a sign that the government could be preparing to backtrack, Prime Minister Jean Castex announced on Friday he would appoint a commission to redraft Article 24.

But he was forced into a U-turn even on this proposal after parliament speaker Richard Ferrand – a close Macron ally – accused the premier of trying to usurp the role of parliament.

The government says the provision is intended to protect officers from doxxing and online abuse, but critics say it is further evidence of the Macron administration’s slide to the right.

Media unions say it could give police a green light to prevent journalists – and social media users – from documenting abuses.

The images of the beating of Zecler emerged days after police were already under fire over the forcible removal of a migrant camp in central Paris on Monday, when journalists on the ground recorded police brutality.

Three of the police involved in the beating of Zecler are being probed for using racial violence and all four are still being held for questioning after their detention Saturday was extended for another 24 hours, prosecutors said.

Al Jazeera’s Natacha Butler said the French interior minister, one of the main supporters of the security law, is going to be questioned in the National Assembly on Monday about recent incidents of police violence.

“We’re seeing a government that seems in crisis. Macron… has called on his government to try to come up with solutions and propose ways to reinforce confidence between the police and the public again.

“It’s hard to see what exactly the government is going to come up with because most people said… [they simply want] this law to be withdrawn,” Butler said.

Dex Estacado, a representative at the Committee for Justice and Truth for Adama told Al Jazeera from Paris that as a Black man living Paris, he could be asked by officers for an identity check as often as seven times a day.

“It happens a lot if I’m not polite enough, if I don’t know how to manage the group of police officers that talk to me. I could get beat down and I could basically die,” Estacado said.

“The court … in France has condemned France as a state [that conducts] identity checks on non-white people on a regular basis.

“The environment that I’m living in is one of pretty much trying to manage fear.”