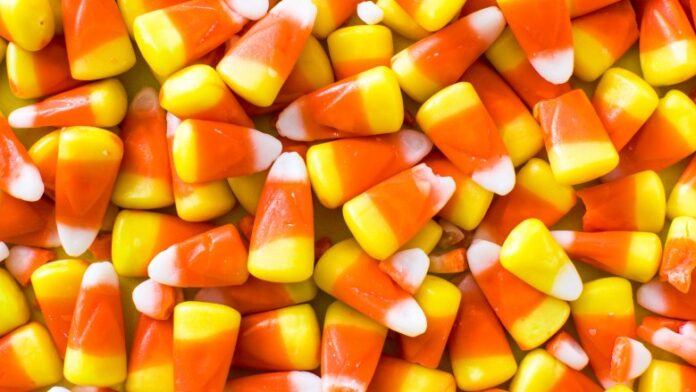 Everyone has their likes and their dislikes, but there’ are a few foods that are polarizing to the extreme. Cilantro is one of them, a leafy green that people either love or want to see condemned to the deepest circle of Dante’s Inferno. Candy corn is pretty much the sweet version of that savory love-or-hate food.

Some people wait for it to hit the shelves, and the high point of the autumn season is putting bowls of it out for some serious picking. Other people? Not so much. It’s the Halloween candy that’s bought out of some sort of feeling of cultural commitment. It sits, and when the season is over, it gets thrown away when no one’s looking. You know all that, but you might not realize that candy corn has a long and very weird history you can appreciate… whether you like it or not.

It started as “Chicken Feed”
Shutterstock
National Geographic says that no one is completely, 100 percent sure just who invented this overly sweet treat, but it’s been around for a long time. The accepted story is that the Wunderle Candy Company and a candymaker named George Renninger is to thank (or blame) for first making candy corn. In 1898, the Goelitz Confectionery Company picked up his creation, and they ran with it.

Corn-inspired candy is weird, but it hearkens back to what candy corn was originally meant to represent. It was first marketed as “Chicken Feed,” and it was a candy that drew its inspiration from an industry that helped build America: agriculture. It was meant to appeal to the farmers, the ranchers, and their families, and it absolutely did.

There’s a bit of irony here, too. At the time candy corn was getting popular, corn wasn’t a dietary staple… at least, not for people. The Atlantic notes that at the turn of the century, corn was purely animal feed. It wasn’t until World War I that eating corn was a necessity, and prior to that, corn-shaped candy would have been a hilarious novelty.

It was pretty groundbreaking
Shutterstock
Candy corn was a big deal, but not because it was something completely new. Not entirely.

During the late 19th century, there were a ton of confectioners making that kind of candy. They were called butter creams, and The Atlantic says they were a pretty standard option when it came to candy. Most were even molded into shapes also inspired by farming, agriculture, and the natural world. Anyone heading into a 19th-century candy store could expect to find butter creams shaped like everything from clover to turnips, so what made candy corn extra impressive?

It was those three layered colors that people had never seen before, and it was eye-catching and novel enough to make it a major hit. It’s a good thing, too. Producing it was a complicated labor of love, as each of those colors needed to be layered one at a time, all by hand. It was totally worth it.

It wasn’t always for autumn
Shutterstock
Today, we think of candy corn — and its vegetable and cornstalk cousin candies — as being heralds of the autumn season. It’s a Halloween staple, it reminds us of the end of the growing season, the harvest, and the coming winter months. It wasn’t always like that, though.

Take one 1957 issue of LIFE magazine, and their epic, sprawling spread advertising “Brach’s Summertime Candies.” The candy featured was “Created for your Summertime Enjoyment,” according to the headline, and it included all kinds of mints, coconut bonbons, circus peanuts, toffees, jelly beans, and candy corn.

The Atlantic says it was about that time that a post-war world started advertising candy as being perfect for holidays like Easter and Halloween, and candy corn was one of the staple “penny candies” sold all year long. Candy corn started out as being associated with all the holidays, and it eventually became so popular as an autumn candy that manufacturers needed to switch up the colors to entice people to buy it at other times of the year.

Why you love it or hate it
Shutterstock
There was a time when candy corn wasn’t nearly as polarizing as it is now, so what’s going on here?

The Supermarket Guru Phil Lempert had a theory he shared with Adweek (via Vox). He suspects it’s just one of many generational differences, and says that for baby boomers, candy corn was a delicious, once-a-year treat that was a huge deal. They love it because it brings memories of childhood, and it’s a fondness that has little or nothing to do with the actual taste. Anyone coming-of-age in the ’50s and ’60s remembers it that way, the same way later generations think of more modern candies like Starburst and Skittles.

Is it all in what you loved as a kid? Or is there more to it? If it’s all about fond memories over taste, is there going to come a point when it’s just no longer relevant?

The recipe hasn’t changed, but…
Shutterstock
Even commercial recipes tend to change as the tastes of consumer evolve, but candy corn is a fascinating exception to the rule. According to the National Confectioners Association, we’re eating pretty much the same candy corn that was such a treat more than 100 years ago. While the process has been mechanized, the recipe hasn’t really changed.

At the turn of the century, it was a labor-intensive process that started when the basic ingredients — including sugar and corn syrup — were melted into a slurry. Marshmallow and fondant were added before the warm mixture was separated and poured into cornstarch trays one color layer at a time. The men who poured the candy were called stringers, and they would spend months walking back and forth, filling the trays to make the candy. Now, machines do all that work instead, but the taste — and the colors — are about as authentic as you can get.

The right way to eat it
Shutterstock
Whether or not it’s good is only one of the epic disagreements that have happened over candy corn — there’s also a huge argument over just what the right way to eat it is. The National Confectioners Association actually surveyed candy corn-lovers to find out just how they eat it, and it’s pretty surprising.

They found that while 46.8 percent of the people surveyed ate the whole thing at once, the rest ate it layer by layer. According to their survey, 42.7 percent of people nibble the small white end first. Only 10.6 percent of people start with the wide yellow layer. Given that it was the layers of different colors that helped make candy corn popular more than 100 years ago, it’s pretty cool to know that even with all the technological advancements we’ve seen over the past decades, the candy corn colors are still as impressive to us as they were to our ancestors.

Wait, how many people like it?
Shutterstock
So, we’ve mentioned that some people love candy corn and some people absolutely hate it. Comedian Lewis Black famously said, “The worst thing about Halloween is, of course, candy corn. All the candy corn that was ever made was made in 1911.”

Harsh words, but how many people agree with him? Fewer than you might think.

When the National Confectioners Association surveyed Americans to find out what their favorite type of Halloween candy is, candy corn came in second. Second! Chocolate was a clear winner with 68 percent of people voting for this candy staple. Ten percent of people voted for candy corn, beating out all other categories (including caramels, licorice, mints, and gummy candies).

The Candy Store decided to look at it another way, and took 10 years of candy sales data (from 2007 to 2016) and compiled a list of favorite candies by state. It was more varied than you might expect, but a whopping six states had candy corn as their top candy: Alabama, Idaho, Michigan, New Mexico, Rhode Island, and South Carolina. Shocking, right?

It lasts longer than a Twinkie
Shutterstock
Lewis Black may have joked that all candy corn was made in 1911, but there’s a bit of fascinating trivia here. While Twinkies might have a reputation as the longest-lasting treat on the shelves, that’s not true. When Twinkies were resurrected in 2013, they had a new, longer shelf life than they’d had before: 45 days, says NPR.

But candy corn can last a lot longer, and according to the National Confectioners Association, even if it’s been opened it can last six to eight months if it’s stored properly. (That’s in an airtight container, or in the fridge if you’re in a hot, humid area, says Still Tasty.) Unopened packages will last about nine months, and if you put that package in the freezer you can make it last up to a year. That’s a lot longer than a Twinkie, so it turns out we should be talking about the suspicious longevity of candy corn, not Twinkies!

The candy corn scandal of the 1950s
Shutterstock
You’ve heard the stories of how unsuspecting kids have found razor blades and poison in their Halloween candy, and while there has only been a few instances of adults handing out dangerous candy, poison expert Deborah Blum says (via Wired), candy corn was actually involved in a potentially deadly food scare.

In 1950, kids all across the country suddenly fell ill after Halloween. They developed some major gastrointestinal distress, and broke out in welts and rashes. The FDA got involved, and found it wasn’t anything that had been added to the candy that made kids sick, it was one of the staple ingredients that had been in candy forever.

It was Orange Dye No. 1, and it was only when a ton of kids ate a ton of candy containing it that people started connecting the dots. It was used in all kinds of food from hot dogs to candy, and it was used to give candy corn and candy pumpkins their orange color. It had been approved in 1906, and it wasn’t until the ’50s that we realized the coal-tar sourced dye was poisonous. It was outlawed, dyes were changed, and we’re still suspicious about funky-colored foods.

People have done insane things to it
Shutterstock
Candy corn is so iconic, gone are the days when it was acceptable to just put a bowl out on the table for your party guests. These days, people have done all kinds of things to that unassuming bag of candy corn, and some we understand. They’re great for adding to Rice Krispie treats for a fun autumnal twist, and you can do the same thing with chocolate chip cookies and chocolate bark. They’re all great ways to cut some of that cloying sweetness that turns a lot of people away… but some things we understand less.

Enterprising internet chefs have found that you can deep-fry candy corn, and it’s surprisingly easy. Just wrap them with crescent roll dough and fry them up, and that’s equal parts amazing and weird. It doesn’t hold a candle to the weirdness of one Twitter user’s candy corn-topped pizza creation. Thrillist reported that the bit of culinary trolling went massively viral in 2017, drawing rage (and the occasional bit of envy) from candy corn lovers and haters alike. Just goes to show, things can always get worse.

“They Were Tortured”: 4 Families Torn Apart by Trump Are Reunited. 1,000+ Still Separated, Missing.

Killed over a Car Air Freshener: Outrage Grows over Police Shooting of Daunte Wright in Minnesota

Years Before a Police Union Leader Was Raided by the FBI, Local Investigators Didn’t...