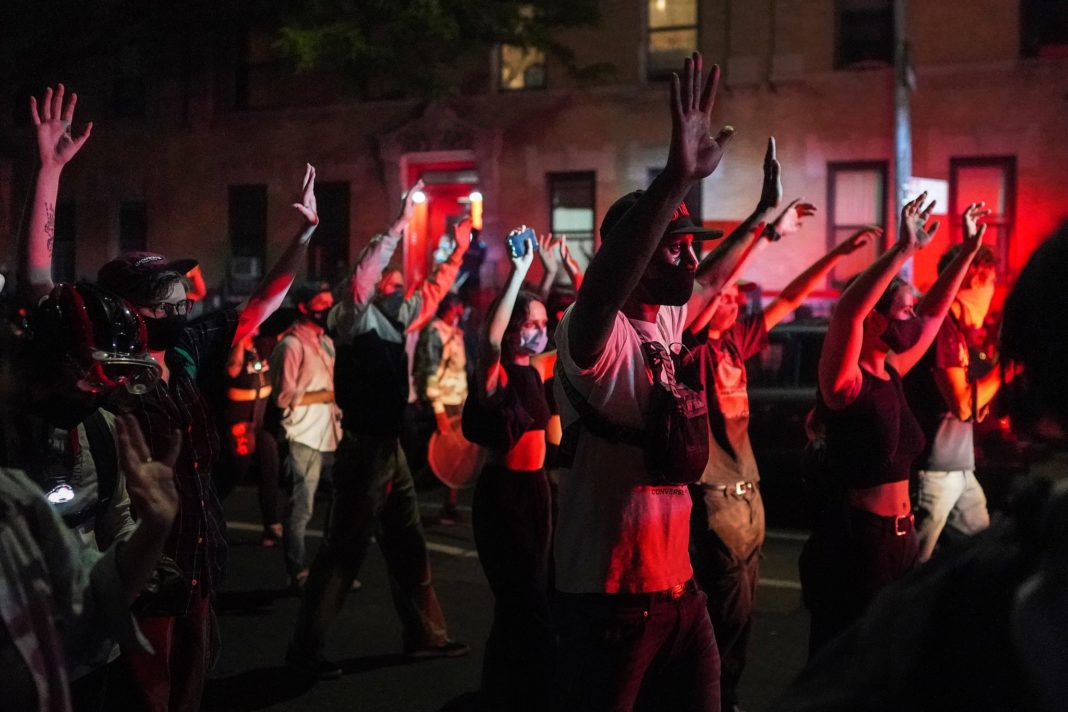 1. Holding Back the Tears

Tear gas has been the Hong Kong police’s main weapon for breaking up demonstrations. Protesters developed tactics to neutralize the tear gas with quick-reaction squads. Early tactics involved smothering the grenade with a wet towel or trying to throw it back with heat-proof gloves, but things have now evolved.

In this video, as soon as a grenade landed near the protesters’ lines and started spewing gas, the first squad member rushed out and placed a traffic cone over the top of the device, so that the cloud could not spread. A second squad member then poured water through the hole at the top of the traffic cone, from a plastic bottle dousing the grenade.

Another surprisingly effective new tactic is to stick the still-smoking grenade in a thermos flask full of mud to douse it.

The umbrella is one of the symbols of the Hong Kong protests, and the protesters are sometimes called the Umbrella Movement. The umbrellas are a visible sign of protest, but they also have practical uses: Demonstrators started bringing them to protests in 2014 as protection against pepper spray used by the police. Sometimes the protesters lock umbrellas together to form the modern equivalent of a shield wall against spray.

Umbrellas are also used for screening. When tear gas grenades are being doused, other team members hold up umbrellas to hide their colleagues from police observation and prevent rubber bullets being aimed at them.

Protesters employed umbrellas in their actions to bring the transport system to a halt, using them to jam subway doors open.

Smartphones are a powerful tool for a surveillance state, allowing them to track people and monitor their activities via social media postings. Protesters are careful not to post from demonstrations, or take selfies. They’ve also found ways to use apps for their own ends.

Some protests are organized via the secure Telegram app. Chat groups can have tens of thousands of members, and a polling function allows the participants to vote on what action they should take. This is sometimes used tactically, to decide whether a protest should remain in one spot or move on.

The authorities have tried to stop this type of activity by cutting the phone signal in specific areas. Protesters responded by using alternative technology, in particular the AirDrop function built into iPhones and the Bridgefly app, both of which communicate via Bluetooth.

There are no official figures, but the South China Morning Post estimates that there are at least 50,000 CCTV cameras in Hong Kong. Surveillance is everywhere, and the authorities have increasingly been combining it with facial recognition technology to identify target protesters.

Protesters wear gas masks not just against tear gas, but also to obscure their faces. And, unsurprisingly, they’ve also started bringing down the masts that support CCTV cameras. In a novel tactic, laser pointers are used to defeat the cameras and dazzle police, making protests look like something out of Star Wars.

Laser pointers have become a protest tool in their own right. After a student was arrested for possessing a pointer, hundreds of protesters turned up to shine lasers at the dome of the Hong Kong Space Museum to show support.

Many of the protesters wear yellow hard hats, partly as protection against the batons that Hong Kong police wield enthusiastically. Others have taken to wearing sports helmets, and local shops have sold out of all types of protective headgear.

Like the umbrella, the hard hat has become a symbol of the resistance, so people have started wearing them as a form of mute protest against the authorities. Commuters and shop assistants can be seen wearing them, some customized with messages like “We Love Hong Kong” or “I just want to get home safe.”

In a pointed show of solidarity, Hong Kong journalists wore helmets at a police press briefing. Because you can’t arrest someone just for wearing a hat, can you?

The Hong Kong protestors built barricades and blocked streets, but they didn’t stay long. They often dispersed as soon as the police showed up in force, using phone apps to coordinate their actions in flashmob-type actions before riot police could respond.

“We’re going around to stop the police from catching us,” one woman told reporters. “We need to be like water.”

“Be Water” has become one of the slogans of the movement. It’s taken from the philosophy of Hong Kong martial arts movie legend Bruce Lee, who advocated that one “must be shapeless, formless, like water.”

The whole protest movement is deliberately formless, so there are no leaders to arrest. And its fluid tactics—disappearing when the opposition is strong and appearing where they are weak— successfully outmaneuvered the police.

Allen keys, pliers, and scissors have been vital weapons in the protestor’s armory. The scissors cut cable ties securing street barriers, and the Allen keys unlock the nuts that fasten them together. This way protestors can remove obstacles and use them to build their own barricades outside police stations and other strategic spots.

Because such tools are in short supply, Antony Dapiran of the New Statesman observed crowds of protesters using special hand signals to request relevant items, which were then passed along by a human chain to where they were needed. These chains can stretch more than a kilometer in an impressive display of coordination, a low-tech, but effective distribution system.