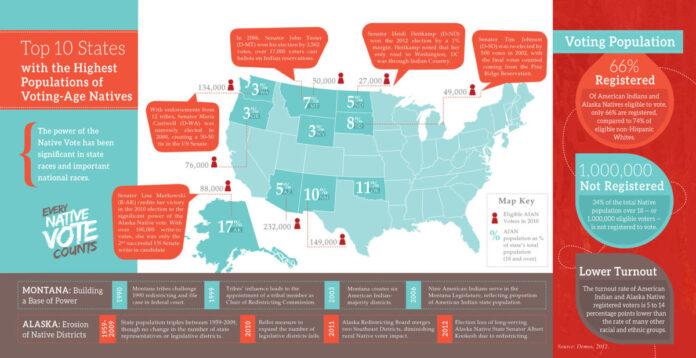 Amidst the racial rancour that is the 2020 United States election, Native American voters have an opportunity never seen before.

To get to the 270 electoral college votes and the U.S. presidency, Democratic candidate Joe Biden or Republican counterpart Donald Trump are going to need to win (some or all of): Arizona (11 electoral votes), Michigan (16), Minnesota (10), North Carolina (15) and Wisconsin (10).

Polls suggest these are “swing states,” where only a few percentages make the difference (Minnesota and Wisconsin have the largest margins, with around a five per cent edge for Biden).

At the same time, Native American voters make around two per cent or more of the eligible population in each of those states (with Arizona the highest at 5.6 per cent).

In other words: the Indigenous vote can make the difference.

Indigenous candidates have made an impact this U.S. election cycle. Since the primaries, a record 15 Native American women ran in congressional races (seven Democratic, eight Republican) and three in senate races (two Democrat, one Republican). They were likely inspired by the first two Native American women elected to Congress in 2018 (Deb Haaland in New Mexico and Sharice Davids in Kansas).

However, Trump and Biden have been void in proposing much of anything for Native communities. (Democratic vice-presidential candidate Kamala Harris, though, has been vocal in the past on issues such as tribal land rights.)

In the 2016 U.S. election, 1.8 million Native American voters cast a ballot, out of 3.7 million potential voters. That’s well below the 55 per cent of Americans who showed up at the polling booth in 2016 (and, to compare, 15 per cent less than Indigenous participation in the 2019 Canadian federal election).

This is assuming, of course, most Native Americans vote Democratic — which historically they have. 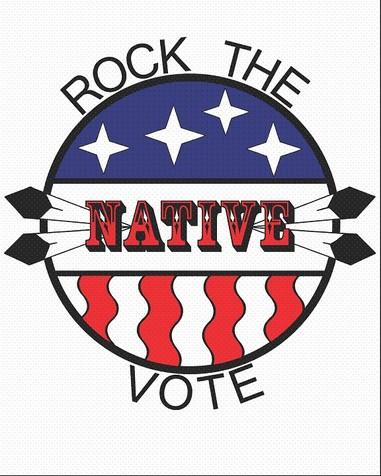 While there are some staunch Native American Republicans in states such as Oklahoma (two of its five Congress representatives are Indigenous), most lean Democrat due to that party’s focus on supporting poor, disenfranchised, and marginalized communities. In the 2012 federal election, for example, nearly 70 per cent of eligible Native American voters supported Barack Obama’s presidential re-election drive.

This is perhaps why Native Americans experience rampant voter suppression, barriers and obstacles. While Indigenous peoples were granted United States citizenship in 1924, there was no right to vote until 1948, and many states had laws in place that banned Indigenous participation until the 1970s.

The main issue is voter registration.

While the government in 2019 passed the Native American Voting Rights Act, which guarantees “in-person registration opportunities by designating a federally funded facility on the reservation,” more than half of 326 reservations still lack a polling place in their territory.

This is not to mention outright voter suppression.

In 2008, Alaska eliminated polling locations in Indigenous communities, forcing many to fly in if they wanted to vote. Utah has switched primarily to mail-only voting. In states all across the Midwest, voting boundaries are regularly gerrymandered (historically favouring Republicans).

This is not to mention other, “unofficial” techniques.

For instance, rural Native American voters often have to drive hundreds of miles to vote. In cities, Native American poverty is as high as 30 per cent and it makes voting nearly impossible when obstacles such as transportation, child care, and work commitments are in the way.

If Native Americans do show up to vote, they must have “acceptable” identification, with state-recognized street addresses — a rarity on-reserve and impossible with the homeless.

Add in the health risks that involves with the COVID-19 pandemic, and you get the picture.

So, if election night Tuesday shows U.S. states with high Indigenous voter populations making a difference, it won’t just be history but a remarkable display of resilience, rights, and Native American voice.

Poet Martín Espada on “Floaters,” the Dehumanization of Refugees, Puerto Rico & His Father