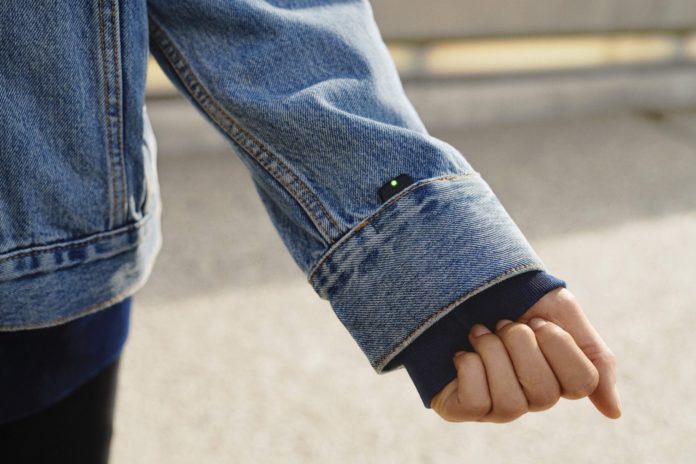 The left sleeve on the blue denim jacket I’m wearing looks like a normal textile. But if I brush my right hand over that small part of the garment, moving inwards, a robotic voice announces the time through my Bluetooth headphones. Moving my hand across it outwards—like I’m pushing crumbs off the sleeve— prompts the Google Assistant to tell me the weather. If I double-tap it, any song I’m listening to skips back to the beginning.

The jacket emerged from a collaboration between Levi’s and Google; it’s part of a Google project called Jacquard. Conductive fibers in one portion of the sleeve connect to a chip, also in the sleeve, and a 1.5-inch black electronic component plugs into a portal at the cuff. That acts as a Bluetooth bridge between the garment and your phone.

Using the corresponding app, you can determine what the different gestures you make on the sleeve actually do (the jacket is mostly meant to be used with headphones on). If you want that “brush in” to announce the name of the song playing, it can do that, too. Likewise, the “brush out” and “double tap” motions can perform various functions, like skipping ahead to the next track or just playing or pausing what you’re listening to. If you want, the black component that plugs in can display a blue blinking light if someone calls or texts you, or a green light when your Uber arrives.

Make no mistake: this product does not need to exist, and you shouldn’t buy one unless you’re absolutely in love with the idea of owning one and have money to spare. Jackets that are not smart still keep you warm and looking stylish, and your phone and Bluetooth headphones work just fine without a smart textile in the loop. Apple’s AirPods, for example, allow you to customize what a double-tap on either the left or right bud accomplishes, like playing or pausing your tunes, meaning that some of the jacket’s functionality already exists in the buds in your ears.

But in a tech landscape where the main products are smartphones with glass screens designed for precise motions that require you to stare at a glowing display, or smart speakers you bark orders at, this jacket deserves a moment of attention. That’s because it enables a different way of interacting with the rectangular device in your pocket: simple gestures, like double-tapping your sleeve, to accomplish something equally basic. And using the jacket in addition to the headphones like the AirPods allows you to incorporate additional touch controls, beyond what you’ve already mapped to the your earbuds: double-tap either the left or right AirPod to execute tasks like pausing the song or summoning Siri, then double-tap your jacket cuff to skip a track ahead.

A version of this jacket first went on sale in October of 2017, and in the two years since, Google and Levi’s have dramatically improved it. The generation-one product relied on a 4.5-inch black connector that protruded noticeably from the sleeve, resembling the kind of theft-protection devices you might see in a clothing store. And the touch-sensitive interface on the jacket itself was more noticeable. Now, the black connectivity gizmo protrudes from the sleeve by less that half an inch, and the touch-sensitive bit of fabric is indistinguishable from the rest of the garment. Gen-one was clunky. Gen-two is streamlined.

“The main benefit of this is the immediacy of the interaction,” says Chris Harrison, an assistant professor at Carnegie Mellon’s Human-Computer Interaction Institute. “You don’t have to pull out the phone, or roll back your sleeve to use a smartwatch.” Instead, you’re doing something just by touching a piece of fabric.

Gestures like these, he notes, are similar to the real-world ones that humans intuitively do with each other, like a wave of the hand to tell someone you’re on the phone and you want them to talk to you later. “We don’t really have that intuitive behavior for a phone,” says Harrison—but brushing your sleeve outwards to skip a song is in that realm. In fact, Google baked gestures like that into its Nest Hub Max smart home display—a hand-raise silences a timer.

And while touch-sensitive fabric seems like a very 2019 idea, the concept dates back to at least 1997, and a key paper out of MIT that stated, in its abstract, that “Wearable computers can now merge seamlessly into ordinary clothing.” More than twenty years on, and that vision is happening in a way now that is indeed basically seamless. It’s fun to think about, and even imagine a future where Star Trek-style communication badges are just woven into clothing. You just probably don’t need to buy one of these jackets—they cost either $198 or $248, depending on which version you want—today.

The War On Drugs Isn’t Over, According To The FBI

5 Things To Avoid Once You Get Your Vaccine Appointment