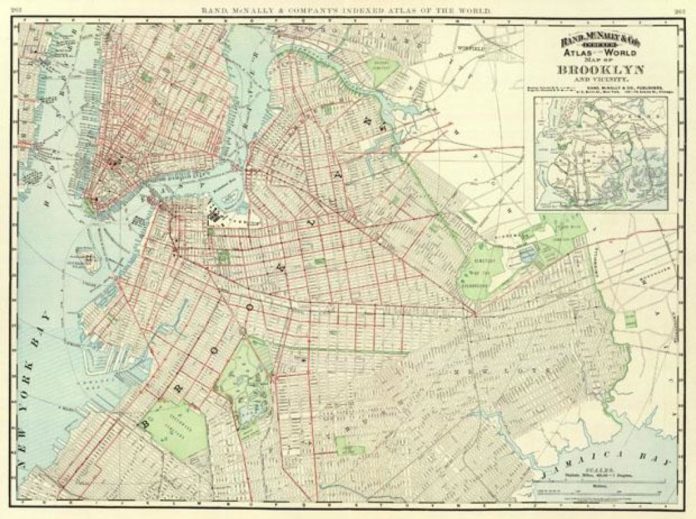 Brooklyn’s modern history began as six small Dutch towns on the southern tip of Long Island. From these inauspicious beginnings sprouted New York’s most populous borough, full of unique and distinct neighborhoods. You may know where these neighborhoods are, but do you know what their names mean?

Dutch settlers landed in this area and dubbed it “Yellow Hook” for its yellow clay soil along the water. In 1853, a yellow fever epidemic broke out and, in a move of astute marketing, Yellow Hook’s citizens changed the neighborhood’s name to Bay Ridge. Wealthy New Yorkers were attracted to the area’s beautiful views of New York Bay—a much better draw than a virulent blood disease.

The Bergen family were some of the first Dutch settlers to land in Brooklyn. Their clan originated in Bergen, Norway, and descendent Hans Hansen Bergen migrated to Kings County in 1633. His wife, Sarah Rapelye, arrived with the first Dutch ship to the borough and, according to the book Brooklyn by Name, she called herself the “first-born Christian Daughter of New Netherland.” What people actually called her behind her back, however, has been lost in the tides of history.

This hybrid name comes from the time when the town of Bedford merged with Stuyvesant Heights. Stuyvesant Heights was named for Peter Stuyvesant, the last governor of the Dutch-controlled New Netherlands colony before it was given to British rule in 1664.

The Boerums were early Dutch settlers who arrived in Brooklyn in 1649 and rose to prominence as farmers in the area. The name Boerum Hill was out of fashion for much of the 20th century and the area was often just referred to as “South Brooklyn.” When the neighborhood’s popularity rose in the 1990s, South Brooklyn was out and Boerum Hill was in.

This one is relatively self-explanatory, but the name “Brooklyn” isn’t (at least for those of us who don’t speak Dutch). It comes from Breuckelen, one of the aforementioned six original towns of Kings County. New York’s first suburb was named for the ridge it’s perched upon over the East River. It was known as “Brooklyn Village” for years before the name “Brooklyn Heights” stuck as the borough grew.

Like Boerum Hill, Carroll Gardens was just “South Brooklyn” for most of its history. The name “Carroll Gardens” comes from Charles Carroll, a signer of the Declaration of Independence. Carroll led a failed assault on a British encampment near the Gowanus Canal in 1776 and lost about 300 of his 400 troops. In the mid-20th century,a neighborhood civic association popularized the name Carroll Gardens in an attempt to revitalize the area. Their plan wound up being far more successful than Carroll’s assault.

This neighborhood just east of Fort Greene is named after Clinton Avenue, which is itself named after New York Governor DeWitt Clinton (in office from 1817 to ’22 and again from 1825 to ’28). “Hill” alludes to the area’s downright dizzying elevation of 95 feet.

This area is named for the steep cobblestone street that once rose from what today is the corner of Court and Pacific Streets. Early Dutch settlers called it “Ponkiesbergh,” which literally translates to “Cobble Hill.” George Washington used it as a vantage point during the Revolutionary War’s Battle of Long Island. The Americans lost, but as least he had a great view.

Crown Heights was originally Crow Hill until Crown Street was laid through the neighborhood in 1916. We may never know why they didn’t just change the name to “Crown Hill” so they would only have to buy one letter to change all the signs.

The sprawling Cypress Hills Cemetery was incorporated on November 21, 1848 by New York state as a non-profit, non-sectarian organization, and the surrounding neighborhood soon took its name.

Downtown Brooklyn became the business hub of the borough largely because Fulton’s steamship, which was the first form of mass transit between Manhattan and Brooklyn, connected the area to New York’s financial center.

Dyker Beach and Meadow is thought to have beennamed after the Van Dykes, a Dutch family who divided the land when it was part of New Utrecht, one of the original Dutch towns on Long Island. The overhang above it was disregarded as unfarmable for centuries before 1893, when Walter L. Johnson inherited it and turned it into a livable suburb named after the beach below. Above is a Popular Science Monthlycross-section of Dyker Beach and Meadow from 1876.

This acronym stands for Down Under the Manhattan Bridge Overpass and was coined in the 1970s after artists began to migrate to the then-unnamed, sparsely populated former industrial hub between the Brooklyn and Manhattan bridges. The name was inspired by Manhattan’s sing-song neighborhoods like SoHo and Tribeca.

East New York was the brainchild of John R. Pitkin, a rich merchant from Connecticut who began developing the area in 1835. He wanted it to rival New York City, but an economic depression ruined those plans. East New York eventually became incorporated into regular New York in 1897. Sorry, John.

Flatlands was originally known by Dutch settlers as Nieuw Amersfoort. Once British rule set in, the name became “Flatlands” because the area was—wait for it—flat. The region was primarily used for farming tobacco and other crops.

Here’s a simple one: Fort Greene was once a fort. It was named after Nathanael Greene, a Major General in the Continental Army and one of George Washington’s most trusted officers. Washington withdrew troops from this earthen fort when he knew the Battle of Long Island was lost, preventing further casualties.

This hard-to-access, crescent-shaped neighborhood adjacent to Marine Park is named for Wolfert Gerritsen, a 17th century settler. The area was mostly marsh until New Yorkers began building summer homes there after the first World War.

Named after the canal, which itself was named after Gouwane, a chief of the Lenape (also known as Canarsee) tribe of Native Americans who lived in the area long before any Dutch or British people came and started calling it “Brooklyn” or “Breuckelen.”

The origin of this neighborhood name was under some dispute, but the argument didn’t last long. Historical archeologist (and Bayside, Queens resident) Richard Schaeffer settled it with a one-punch knockout of a letter to the editor in the New York Times. The Times had said that “Gravesend” comes from the British township where Lady Deborah Moody had migrated from. According to Schaeffer, it actually comes from Dutch governor-general William Kieft, who “chose to name the settlement ‘s- Gravesande after the town in Holland that had been the seat of the Counts of Holland before they moved to the Hague. It means the count’s sand or beach. The odd spelling, with hyphen and apostrophe, is an archaic Dutch possessive form.”

Early European settlers called a small, grassy bluff protruding out into the East River “greenpoint,” and the name stuck for the entire area. The original greenpoint would have been at the end of Freeman street, where a truck yard stands now.

This tiny protected peninsula inside Jamaica Bay was once the site of tidal mills, hence “Mill Basin.”

This stretch of piers, channels, and dry docks on the East River became an official United States Navy Yard in 1806 and was in service until 1966. After a short period of commercial shipbuilding, the Navy Yard has been out of maritime service since 1987.

These adjacent neighborhoods are both named for Prospect Park. The names were interchangeable when referring to the whole area for years until residents and real estate brokers began firmly differentiating the two.

Red Hook’s name comes from the red soil found at the point of South Brooklyn (“hoek” is Dutch for “point”). Red Hook was of great strategic importance in the defense of New York Harbor during the Revolutionary War. There’s an IKEA there now, so score a surprising victory for the Swedes.

Not many people know about Sea Gate, a tiny beachside community located on the western tip of Coney Island. The area was originally named “Norton’s Point” after a casino that once operated there, but the gaming industry was ushered out in 1892 in favor of a small, gated community. Hence, “Sea Gate.”

The sheepshead fish was such a popular catch in the 1800s in Brooklyn that they named the sliver of a bay and the adjacent plot of land after it. Oddly, the sheepshead prefers much warmer climes, but the funny-looking fish with human-like teeth couldn’t get enough of Brooklyn. Nowadays, it’s remarkably rare to find one swimming in the area. It’s theorized that pollution killed the oyster reefs they fed on and eventually thinned out their numbers. That, or their rents got jacked up when yuppie fish moved in.

Another neighborhood known simply as “South Brooklyn” for years, Sunset Park got its current name from the local park just south of Green-Wood Cemetery. The park offers terrific views of the Manhattan skyline during sunsets, hence the name “Sunset Park.” If you are poetic at heart, feel free to ascribe the name as a sorrowful allusion to the neighboring cemetery.

This area along the East River was dubbed “Bushwick Shores” before it was purchased in 1802 by real estate investor Richard Woodhull. He named it “Williamsburgh” after Jonathan Williams, the engineer who surveyed the land.

These neighborhood names skip the anglicized Dutch and come directly from towns in the UK.

Brighton Beach got its name in 1878 after a group of business developers held a contest to decide what the area would be called.

Bath Beach, which rests up against Gravesend Bay, is named for the town located in the southwest of England.

THE MODEST MEN OF BROOKLYN

These three communities have one thing in common: The men who established them humbly named each one after themselves.

In 1835, Brooklyn Gas Light president Arthur W. Benson bought a large plot of farmland and developed it into a suburb he named Bensonhurst.

In 1893, James Lefferts inherited a swath of Dutch farmland that he divided into 600 separate building lots for single-family homes. That area, within Lefferts Gardens, still stands and goes by its original name, Lefferts Manor.

Much of Brooklyn was at one time dense woodlands, hence these names from the endlessly creative Dutch.

Originally “Vlackte Bosch,” which means “flat forest,” or “a plain with woods.”

Evolved from “Boswijck,” meaning “little town in the woods.”

UPDATE: As many readers have correctly pointed out, this article omits Canarsie. The name “Canarsie” comes from a translation of what the original Dutch settlers called the Lenape Native Americans who lived in what is now Brooklyn.

Also omitted: Vinegar Hill (named by Irish immigrants after the Battle of Vinegar Hill), Windsor Terrace (which is said to have beencoined by Robert Bell, an early resident in the area), and Boro Park (State Senator William H. Reynolds bought the land in 1898 and called it “Borough Park”).

This Kardashian Is Taking A Step Back From ‘KUWTK’; Justin Bieber Sparks Outrage With His Opinion Of Popeyes Chicken Sandwich