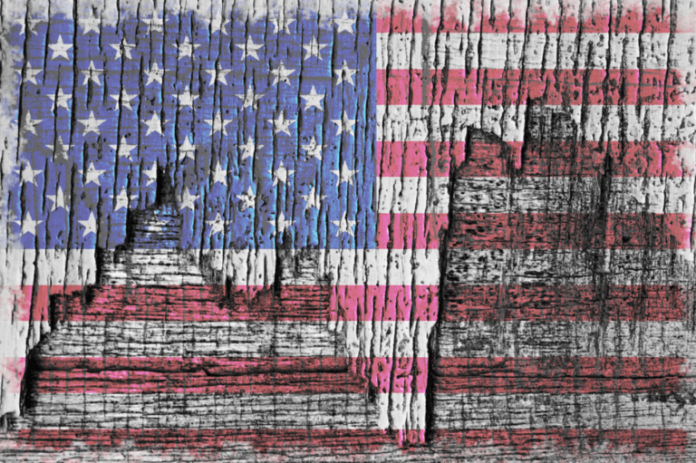 Corporate Power is the Fusion of the Corporation and the State

The rise of Corporate Power was the fall of democracy.  Over the long haul, US politics has revolved around a deep tension between democracy and an unrelenting drive for plunder, power and empire. Granted that our democracy has been seriously flawed and only rarely revolutionary, yet the democratic movements are the source of every good thing America has ever stood for.

Since the mid-1970s, when the corporations fused with the state, a new imperial order emerged that killed what remained of representative democracy. Not only would corporations exercise public authority as only government once had, but government would coordinate and serve corporate activity. Power and profits became one and the same. Corporate power has replaced democracy with oligarchy and justice with a vast militarized penal system. Instead of innovative production, they plunder people and planet.

To achieve this new order, elections and the economy had to be drained of any remaining democratic content. Both Democrats and Republicans were eager to have at it.

By the 1990s “Third Way” Democrats like Bill Clinton abandoned what was left of the New Deal to try to outdo the Republicans as the party of Wall Street. The Republicans pioneered election fraud on a national scale in 2000, 2004, and 2016; a lesson the Democrats learned all too well by the 2016 Primary. Neither major party wants election reform since free and fair elections would threaten the system itself.

So-called private corporations like Facebook, Google and Twittercontrol information and manage the 1st Amendment. The corporate media now broadcast propaganda and play the role of censor once monopolized by the FBI and CIA. The migration of propaganda work to civilian organizations began under Ronald Reagan.

While both major parties offer the people nothing beyond austerity and the worst kind of identity politics, the big banks like Goldman Sachs gained positions of real influence with both Republican and Democratic administrations and always with the Department of the Treasury and the Federal Reserve.  Without pubic money and political protection the banking system — the headquarters of the mythical free market — could not function.

The Rise of Corporate Power

Corporations made the first big power grab in 1913 when the Federal Reserve was created.  Banks were given the power to impose corporate regulation on the “cutthroat competition” of the free market.  Competition was chaotic and lowered profits. Corporations killed not just democracy but the free market as well.

Corporations also had their own private militarized police force. The Pinkertons, infamous for attacking striking workers, was the largest armed force in the US in the early decades of the 20th century: larger than the US Army at that time.

The mid-1970s were nonetheless a pivotal time as corporations achieved unmatched political supremacy and overthrew a brief period of relative economic democracy. Corporate power was the reaction to the American revolution that occurred between 1955 and 1975.

The corporations wanted to lower wages while maintaining high levels of consumption and profit.  Their solution was to deny workers raises while offering instead record levels of credit and debt. And for that move they needed massive banks.  Finance capital then leveraged even greater profits by repackaging debt as an investment and selling the world on their scheme. And for that maneuver to work banks needed to act with the full faith and confidence of the US government.

The shift to austerity for workers and power for bankers began during the mid-1970’s as wage increases no longer tracked productivity.  During the last two years of the Carter Administration — with a majority Democratic congress — those trends continued and were dramatically accelerated by Reagan who empowered bankers, revised tax codes and redistributed wealth. By the 1990’s the corporatization of government was more or less complete.  Take Robert Rubin’s career for example: he was a 26 year veteran of Goldman-Sachs and Bill Clinton’s Treasury Secretary.  Along with Henry Paulson, Alan Greenspan and Larry Summers, Rubin rewrote economic rules in the image of the corporation: a law unto themselves and in direct command of the power of the state.[1]

A well-funded revolving door insures the power of “Government-Sachs.”

After the 2008 crash $19 trillion was destroyed as everyday people lost their homes, jobs and pensions but the banks received the largest global bailout in history.  Big banks grew larger and more powerful than ever. Not only were there no indictments, but Obama returned Summers, Timothy Geithner and Ben Bernanke to power despite their roles as architects of the crisis. Hillary Clinton pandered to them, Trump railed against them, but after the 2016 election Trump appointed Goldman-Sachs executives to key postions.

Property is the Creature of the State

In order to kill the economic underpinnings of democracy, Corporate Power rigged the game. So deep is the fusion between the corporations and the state that profits are now created largely by political means. There is nothing “free” about this market; instead it is driven by political intervention every step of the way. From start to finish, the supply chain of corporate profits is government action.

▪     Big corporations, like Google, Facebook, and Apple start by appropriating technologies developed at the public expense by governments and universities.

▪     Corporations win billions in subsidies, including five $trillion a year for fossil fuels. Corporate power depends on what now seems a permanent regime of “quantitative easing” or virtually free money for finance capital.

▪     Workers are exploited for profit. Low wages and labor standards at home and abroad are enforced by law and trade agreements.

▪     Most discretionary spending in the US federal budget is for the military-industrial complex which is, with the possible exception of China, the largest centrally planned economy in the world.

▪     Tax codes permit and encourage corporations to avoid taxes and hoard capital.  The amount staggers the imagination: corporations and billionaires shelter between 21 and 31 $trillion from fair taxation, a sum equal to the GDP of the US and Japan combined.  Political representatives enforce the fiction that the government is broke and austerity measures must be imposed.

▪     The corporate system still relies on plundering the natural world. The largest cost of resource extraction is environmental destruction.  Pollution costs to the tune of 2.2 $trillion are “externalized” and taken off the corporate ledger books.

If the true costs of risk, labor, research and development, environmental damage, war, and taxes were charged to their accounts, what corporation could claim profits? On environment costs alone, almost no industry would be profitable.

The fusion of the corporation and the state, not free-market capitalism, is the true political economy of the U.S.

The State is the Creature of Property

While there are many, many, many ways to prove that big money rules America, Supreme Court decision “Citizens United” provides compelling evidence that corporations wield state power.  Instead of insuring that the people have protections like the Bill of Rights against the corporations that now govern, “Citizens United” repealed the 1st Amendment by recognizing corporations as people and protecting money as a form of free speech.  Corporate power is cloaked and protected, the peoples’ rights are stripped and rejected.

“The Court’s…approach to the First Amendment may well promote corporate power at the cost of the individual and collective self-expression the Amendment was meant to serve. It will undoubtedly cripple the ability of ordinary citizens, Congress, and the States to adopt even limited measures to protect against corporate domination of the electoral process.”

The “corporate domination of the election process.” Done.

Given that the top 0.1% is now worth as much as the bottom 90% and that long-standing inequalities in wealth have only increased during the Obama Administration and are sure to continue under Trump, the super-rich have the capacity to drown out all others voices and secure their domination of politics in the US.

The price tag for federal elections held in 2016 was $6.5 billion. A tidy sum for an election so bankrupt and dismal that over 90 million eligible voters stayed home and at least 1.75 million that did vote refused to do so for President. Millions more could do no better than hold their noses and vote, once again, for some fabled lesser of two evils.

Corporate Power Must Be Confronted

It’s late in the day. In a 2014 study — the most comprehensive of its kind — Princeton and Northwestern University researchers have demonstrated the utter lack of democracy in the US. Corporate Power and the US Empire killed American democracy while political cowardice and propaganda have us looking for other perpetrators. No it’s not the Russians. Its our own history, culture and political system.

Corporate power has created a world so unequal that there is no way to change it within the existing political framework.  Teams of researchers using data that span thousands of years have concluded that the current extremes in wealth are setting the stage for conflict.  In The Great Leveler, historian Walter Scheidel, concludes that only mass mobilization wars, transformative revolutions, pandemics or state collapse have redistributed wealth once it has reached current extremes.

Americans have always dreamed that we are an exception to history but we are not.   Not only will “incremental change” or the “lesser of two evils” or faith in the wonders of technology fail to prevent disaster — such ideas have delivered us to the crisis we now face.  We long for an easy way out — a way that does not demand risk — a way without the only kind of struggle that has ever made history. Of the most likely outcomes that lie ahead transformative revolution and transformative social movements like Standing Rock, are our best chance to minimize violence, reduce harm and create a better world.

Corporate Power is so destructive to democracy and dangerous to the planet because it recognizes no limits other than those imposed upon it. Corporate Power has but one reason for being: the maximum possible profit and the maximum possible power.   Corporations must grow or die but now their growth threatens ecocide, perpetual war and the death of democracy.  Such a way of life cannot be sustained. There are but few possible outcomes: the internal contradictions of system will drive us to desperate crisis, or we intervene first, rebuild democracy, protect the planet, and overthrow the corporate dictatorship.

[1]. The 2010 Academy Award winning film Inside Job documents the rise of the corporate state in the context of the 2008 crisis.