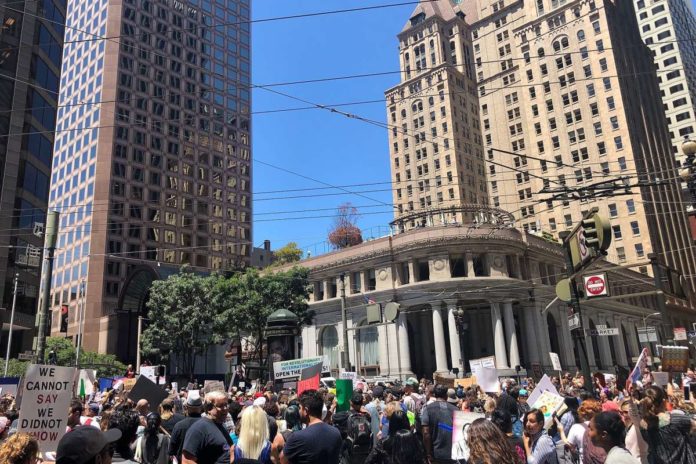 Several hundred people shut down a busy intersection Tuesday in San Francisco, calling on the Trump administration to close detention facilities along the southern border where hundreds of children are being detained.

The rally was part of a national day of action called, “#Closethecamps.” Events were planned in Walnut Creek, Santa Rosa, Las Vegas, El Paso, Chicago, Atlanta and hundreds of other cities.

Protests were organized amid disturbing reports about several detention facilities along the border, where attorneys and lawmakers said they saw severe over-crowding, lack of access to food and showers, children sleeping on mats and young kids caring for toddlers and babies.

Customs and Border Protection, which oversees several of the processing facilities detaining children, did not immediately reply to a request for comment Tuesday. The agency has denied claims that the facilities are dangerous and inhumane, while also saying it’s dealing with an overwhelming number of people crossing the border each day.

Protesters on Tuesday descended on California Sen. Dianne Feinstein’s office at 1 Post St., spilling into the street and blocking off traffic for about an hour.

Micaela Chavez, 25, of Fairfax, held a sign that said, “Families belong together.”

“How can you disagree?” she said. “It’s a basic human tenet that families should be together. It just seems like it should be so uncontroversial, yet it’s so politicized. And that’s what makes it dangerous.”

The group moved on just after 1 p.m. to House Speaker Nancy Pelosi’s office at Seventh and Mission streets.

Muni was forced to switch back light rail lines on Market Street to avoid running into the teeth of the rally. Passengers were advised to use the subway service between Castro and Embarcadero.

Protesters huddled in a circle on the street and raised their hands and screamed the same message written on their poster boards: “Close the camps!”

Facebook Hosted Surge of Misinformation and Insurrection Threats in Months Leading Up to Jan....

The El Paso Attack Was Not Just a Mass Shooting. It Was a Genocidal...