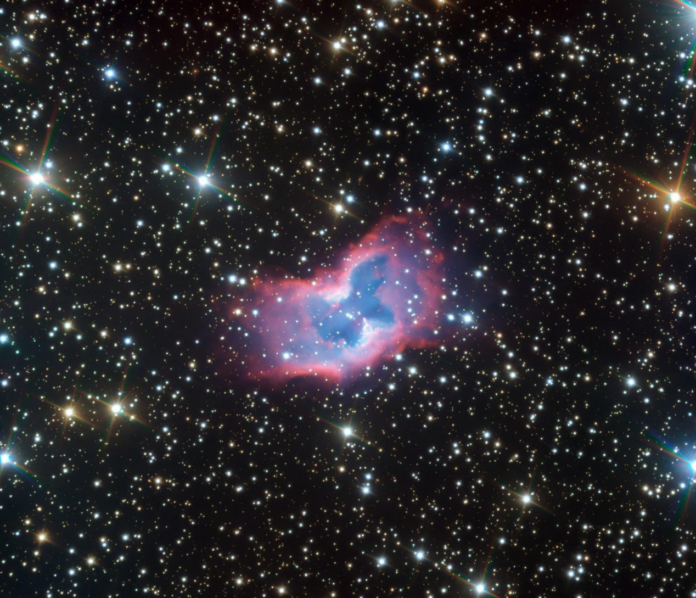 Resembling a butterfly with its symmetrical structure, beautiful colors, and intricate patterns, this striking bubble of gas — known as NGC 2899 — appears to float and flutter across the sky in this new picture from ESO’s Very Large Telescope (VLT). This object has never before been imaged in such striking detail, with even the faint outer edges of the planetary nebula glowing over the background stars. [Source: Scitechdaily]

Astronomers using ESO’s Very Large Telescope have imaged a ‘space butterfly,’ a planetary nebula known as NGC 2899. This video offers stunning views of this object and the science behind it. Credit: ESO

NGC 2899’s vast swathes of gas extend up to a maximum of two light-years from its center, glowing brightly in front of the stars of the Milky Way as the gas reaches temperatures upwards of ten thousand degrees. The high temperatures are due to the large amount of radiation from the nebula’s parent star, which causes the hydrogen gas in the nebula to glow in a reddish halo around the oxygen gas, in blue. This object, located between 3000 and 6500 light-years away in the Southern constellation of Vela (The Sails), has two central stars, which are believed to give it its nearly symmetric appearance. After one star reached the end of its life and cast off its outer layers, the other star now interferes with the flow of gas, forming the two-lobed shape seen here. Only about 10–20% of planetary nebulae[1] display this type of bipolar shape.

Astronomers were able to capture this highly detailed image of NGC 2899 using the FORS instrument installed on UT1 (Antu), one of the four 8.2-meter telescopes that make up ESO’s VLT in Chile. Standing for FOcal Reducer and low dispersion Spectrograph, this high-resolution instrument was one of the first to be installed on ESO’s VLT and is behind numerous beautiful images and discoveries from ESO. FORS has contributed to observations of light from a gravitational wave source, has researched the first known interstellar asteroid, and has been used to study in depth the physics behind the formation of complex planetary nebulae. This chart shows the location of the planetary nebula NGC 2899 in the constellation of Vela (The Sails). The map includes most of the stars visible to the unaided eye under good conditions, and the location of the nebula is indicated by a red circle. Credit: ESO, IAU and Sky & Telescope

This image was created under the ESO Cosmic Gems program, an outreach initiative to produce images of interesting, intriguing or visually attractive objects using ESO telescopes, for the purposes of education and public outreach. The program makes use of telescope time that cannot be used for science observations. All data collected may also be suitable for scientific purposes, and are made available to astronomers through ESO’s science archive.
Notes

[1] Unlike what their common name suggests, planetary nebulae have nothing to do with planets. The first astronomers to observe them merely described them as planet-like in appearance. They are instead formed when ancient stars with up to 6 times the mass of our Sun reach the end of their lives, collapse, and blow off expanding shells of gas, rich in heavy elements. Intense ultraviolet radiation energizes and lights up these moving shells, causing them to shine brightly for thousands of years until they ultimately disperse slowly through space, making planetary nebulae relatively short-lived phenomena on astronomical timescales.