Bangkok, Thailand – Pro-democracy protesters are gathering in Thailand’s capital, in what is expected to be the largest rally in weeks of anti-government demonstrations and the biggest since a military coup in 2014 that brought Prime Minister Prayuth Chan-ocha to power.

Thousands of protesters on Saturday forced their way onto the campus of Bangkok’s Thammasat University, an institution that has long symbolised democracy in the country’s shaky political history. Later, they made their way into the adjacent Sanam Luang field near the royal palace.

The rally is expected to draw tens of thousands of people, with protesters planning to stay out until Sunday. Police said they would deploy thousands of officers.

“Today, we will continue to push for our demands,” said Parit “Penguin” Chiwarak. “As citizens, we should be able to fight for our rights. You cannot stop us. We have now broken through these first gates and we will continue to break through until we have democracy,” added the student activist as he mobilised a large group of protesters on the outer limits of the university.

Moments earlier, tensions had risen as a scuffle broke out between an anti-government protester and a security guard.

The student-led, anti-government movement has been calling for three significant changes to Thailand’s power structure: the dissolution of parliament, the rewriting of the military-drafted constitution and an end to the intimidation of dissidents.

Protesters believe that their votes in last year’s long-delayed general election have been disregarded after Prayuth, a former army general, stayed on as prime minister with the backing of an unelected Senate and smaller parties, despite the pro-military Palang Pracharat party finishing second.

Following the 2014 coup, Prayuth scrapped the country’s constitution and had the military write a new charter that increased the king’s powers and allowed the military to appoint the 250-member Senate that was to have a say in selecting the new prime minister.

Protesters have also been openly discussing Thailand’s powerful monarchy in public, with some calling for it to be reformed and have its political power reduced. This level of public criticism and debate is unprecedented in modern times, as the kingdom’s royal institution is protected by strict lese majeste laws that can carry prison sentences of up to 15 years.

The anti-government movement has been brewing since mid-July, but its origins began when Thailand’s top court in February moved to dissolve the popular Future Forward Party (FFP). Led by charismatic billionaire Thanathorn Juangroongruangkit, the FFP won the third-highest number of parliamentary seats in the March 2019 election and was seen as a threat to the political establishment.

The coronavirus pandemic momentarily halted the movement in March but protests resumed as cases started to fall. And in June, the disappearance of Wanchalerm Satsakit, a well-known activist who was abducted in plain sight outside of his apartment in Cambodia’s capital, Phnom Penh, was the spark that pushed people to take to the streets. 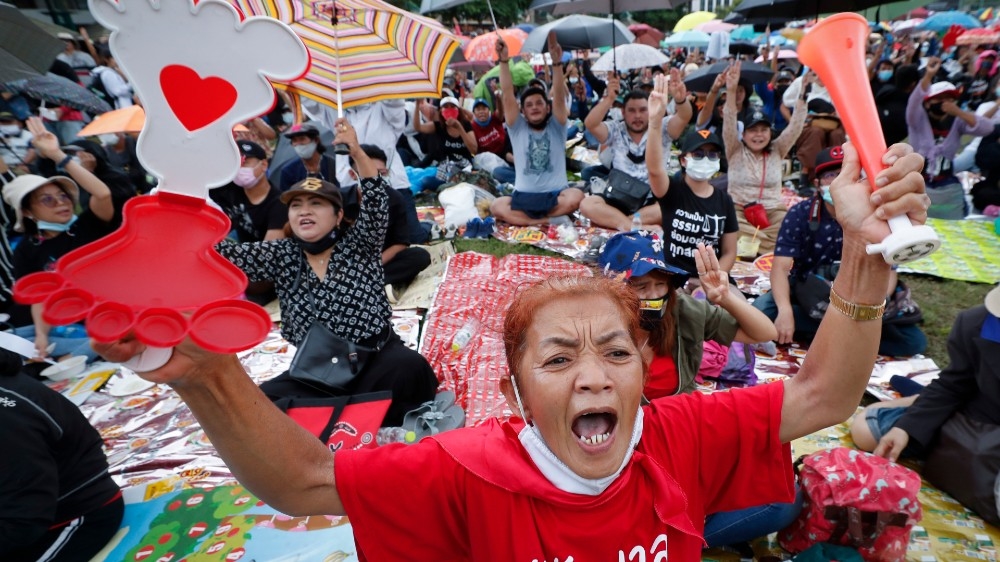 The initially youth-led demonstrations have since grown consistently larger, drawing citizens from all age groups and walks of life amid rising discontent over Thailand’s widening economic inequality.

Mook, 21, a recent university graduate, said she was participating in the protest to fight for “a better future”.

“We’re unhappy with the government, it’s very simple,” she told Al Jazeera. “Last year, when I was in university, it became obvious to us [other students] how difficult our future will be if we don’t ask for this [three demands],” she said. 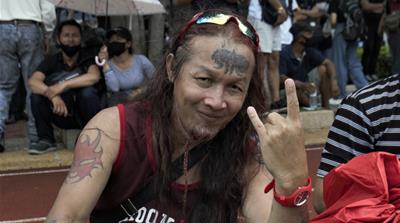 “So today, I’m joining this activity because I think Thailand desperately needs democracy.”

Police estimate up to 50,000 people could show up at Saturday’s protest, but student leaders believe there could be up to 100,000. Some are worried of an impending crackdown as Prayuth recently warned protesters to not “violate the palace”.

“I’m coming here to help the young people,” said Peeja Plahn, 53. “Many of them have not seen political rallies like this and they won’t know what to do if things get bad. We’re here to support their cause, but we’re also here because this government doesn’t work,” he added.

“Thailand needs to move on.”

At least 28 activists have been arrested on various charges, including sedition, since the protests began months ago.

“I Felt Hate More Than Anything”: How an Active Duty Airman Tried to Start...