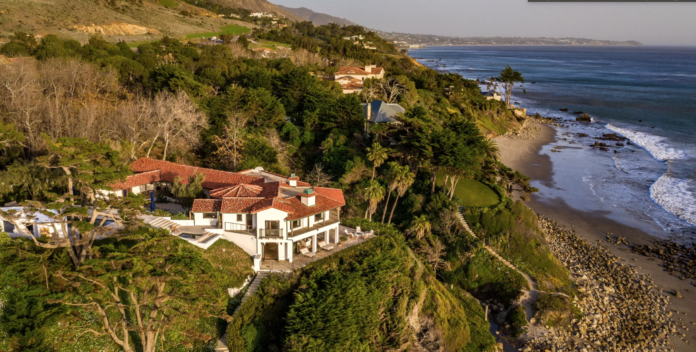 Once again, it’s time to pop champagne and look back on the most expensive celebrity real estate transactions of the year. In 2022, celebrities invested even more money in real estate than they did in 2021, when Calvin Klein’s East Hampton pad fetched $85 million and topped our list of the 10 priciest properties. One legendary singer secured a sprawling Swiss vacation home, other A-listers put down roots in Los Angeles, and other stars bought and flipped luxe plots of land for a handsome profit (we’re looking at you, Ellen). Below, we reflect on the most expensive celebrity transactions that we had our eyes on in 2022.

Television personality Ryan Seacrest first listed his glassy Beverly Hills estate in 2020 for a whopping $85 million but was unable to close a deal. He lowered the price to $74.5 million in 2021, before finally selling the house last month for $51 million—a deep price cut but still impressive enough to bring up the rear of our list. Considering the American Idol host paid $36.5 million when he bought the AD-toured home from Ellen DeGeneres and Portia de Rossi in 2012, it’s likely that he still made out with a good chunk of change from the sale.

In May, Maroon 5 frontman Adam Levine and his wife, model Behati Prinsloo, sold their 1930s Cliff May–designed Pacific Palisades home (which AD toured last year) for $51 million—$6.5 million under their initial ask, but almost $20 million more than the couple paid in 2018 when they bought the 10-bedroom and 14-bathroom dwelling from none other than Ben Affleck and Jennifer Garner, who lived there for nearly a decade until their 2017 divorce.

Right around the same time that they listed their Pacific Palisades pad, Levine and Prinsloo paid $52 million for a Montecito estate known as Oakview. The Georgian-style structure was built for Rob Lowe in 2009 and graced the cover of Architectural Digest’s November 2010 issue. The 3.5-acre property holds a 10,000-square-foot main house, two well-appointed ADUs, a swimming pool, and a tennis court.

Adele set the bar high when she kicked off 2022 with the $58 million purchase of Sylvester Stallone’s Beverly Hills mansion. The hefty sum was actually a bit of a bargain compared to the initial $110 million price tag the Rocky star placed on the contemporary Mediterranean-style house when he first listed it in January 2021. Inside, the eight-bedroom structure boasts a theater, a cigar room, and a custom bar. The 3.5-acre property also notably features a two-story Richard Landry–designed guest house.

It shouldn’t be a surprise that Hollywood couple Ellen DeGeneres and Portia de Rossi made the list: The real estate-loving duo earned two spots in last year’s top 10. The pair bought and sold multiple houses in 2022, but the Carpenteria property that they just bought this month for $70 million was by far the priciest. Made up of two parcels totaling 10 acres, the oceanside estate hosts a sprawling Tuscan-style mansion, a small lake, and plenty of outdoor entertaining space. The sale marked the most expensive real estate transaction ever recorded in the area.

Rumors started swirling at the beginning of March, and records finally confirmed that rapper Drake paid $75 million for singer Robbie Williams’s 20-acre Tuscan-style estate in Beverly Crest, Los Angeles. The Toronto native snagged the property (his first in LA) for $10 million lower than the original asking price. The living space is a sprawling 24,000 square feet, plus a guest house and an 11-car garage.

In January, rock icon Tina Turner and her husband, German music executive Erwin Bach, spent $76 million on an estate in Switzerland. The 5.5-acre compound has 10 buildings plus private waterfront land on Lake Zurich, a pool, a private pond and stream, and a boat deck. Bach told a local publication that they intend to use the sprawling property as a “weekend retreat.”

In August, Snapchat CEO Evan Spiegel and his wife, model Miranda Kerr, finally closed the deal on a $120 million Holmby Hills mansion after nearly two years in escrow. The tech billionaire and former Victoria’s Secret Angel paid an additional $25 million for a neighboring parcel of land, bumping up the estate’s price tag to $145 million. The sale of the property, which sits across from the famed Playboy Mansion, is one of the most expensive on record for a California home.

This year’s top spot comes from another tech billionaire, Oracle cofounder Larry Ellison. Over the summer, the software mogul dropped $173 million on a 62,200-square-foot Palm Beach County mansion, along with a seven-bedroom guest house, two beach cottages, and a manager’s house—all connected via an underground tunnel system. The sale is the most expensive real estate transaction ever made in Florida. Later that summer, Ellison put his nearby Tuscan-style Palm Beach estate on the market for $145 million.

“The Forever Prisoner”: Alex Gibney on Abu Zubaydah, Held in Guantánamo Without Charge Since...

This Narrow Home in Barcelona Is Full of Creative Configurations