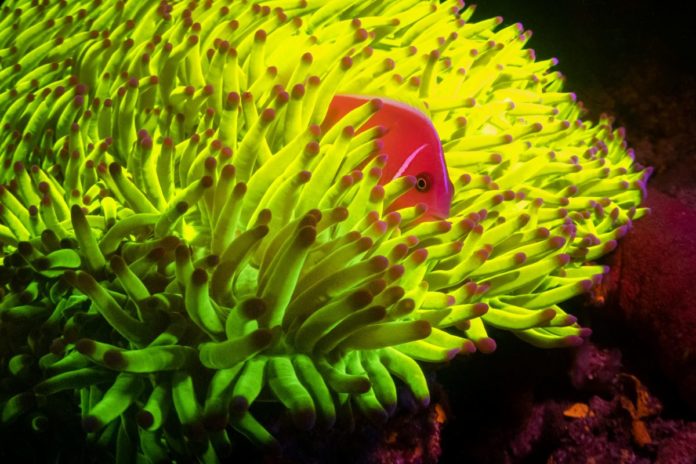 As I descend into dark waters, my blue flashlights reveal a spectacular display of fluorescent colors shining out from some of the corals and marine creatures below. Normally hard to detect with the naked eye, this secret, colorful light show gleams as brightly as an ’80s disco within the beam of my lights.

Fluorescence on the reef occurs as shorter wavelength blue light is absorbed by special proteins in tissues and is re-emitted as longer wavelength greens, reds, oranges, and yellows. While the ocean naturally filters light, leaving the underwater world cast predominantly in blue below 15 meters or so, the addition of concentrated blue light from the flashlights and flashguns attached to my camera rig stimulates the strongest response from the fluorescing proteins. Yellow filters on my lenses and dive mask block the stimulating blue light, enabling me to see and capture the full extent of the psychedelic spectacle.

I’ve been photographing marine fluorescence for over 25 years, capturing it from the Red Sea to the Philippines. I always work at night, when fluorescence is most pronounced against the dark background.

Marine fluorescence was once dismissed as a phenomenon with no biological function, but scientists around the world are gradually exposing its complicated roles. Far from biologically irrelevant, the proteins are perhaps critical to the health of the reef ecosystem and its ability to respond to stress.

Photo or fluorescent proteins responsible for fluorescence, also commonly known as pigments, are versatile molecules. In the shallows, where the sun’s rays are intense, the proteins act as a type of sunblock for a coral reef, reducing light stress.

In deeper, darker waters, these proteins in some types of corals serve to enhance the light instead. All corals live in symbiosis with algae that provide energy to their host through photosynthesis. The proteins help harness and funnel available light, ensuring that even algae deep within a coral’s cells are able to access it.

The amount of fluorescent protein a coral produces is determined by its genetics and how strongly the genes are expressed. “There is a great deal of variation in pigment production between individuals of the same species,” explains Jörg Wiedenmann, head of the Coral Reef Laboratory at the University of Southampton in the United Kingdom. “One might fluoresce strongly while the other produces little or no color.” A coral with dramatic biofluorescence may grow slower than its less colorful neighbor under normal conditions, as it spends more of its energy producing fluorescent proteins, but it may have an advantage when taxed by sunlight.

Marine fluorescence exists in a variety of marine organisms, in temperate and tropical waters. If the roles of the fluorescent molecules are now relatively well understood in corals, the same cannot be said of their purpose in fish. “But it is clear that fluorescence plays an important role in the lives of some fish,” says Nico Michiels, an ecologist at the University of Tübingen in Germany, with the caveat that data is still limited and preliminary. Biologists have discovered that some fish have yellow filters in their eyes, which seems to support the theory that biofluorescence is much more than a pretty byproduct.

Michiels’s team surveyed hundreds of fish species for fluorescence and found distinct patterns. Smaller species are more likely to fluoresce than larger ones. There is also a strong correlation between a highly camouflaged lifestyle and bright fluorescence. Ambush predators, like stonefish and scorpionfish, are good examples: the broken patterns of fluorescence on these fishes may help them blend into a fluorescing reef background. In some species with distinct differences in appearance between males and females, fluorescence also appears to play a role in sexual attraction.

Small fish that live in schools may also use red fluorescence in their eye region for short-range communication. Red light will not travel far underwater, so fish like the redeye goby may communicate within a swarm without attracting the attention of predators. The hairy frogfish, part of the anglerfish family, has fluorescent proteins in its lure, which may help attract unwary prey. And scientists suspect that some fish emit fluorescence so that their light reflects off their prey’s eyes, making the potential meal easier to locate.

Highly camouflaged species are often classed as data deficient for extinction risk because they are so hard to find. But Belgian marine biologist Maarten De Brauwer of the University of Leeds in the United Kingdom surveyed hundreds of fish off Indonesia, Christmas Island, and the Cocos Islands, and found that 87 percent of the species considered cryptic use fluorescence. Inspired by the work of coral scientists who have used blue lights to spot new, very small coral colonies, he looked at whether blue lights could help researchers locate and count hard-to-find species like the tiny pygmy seahorse. “We were able to find double the number of seahorses with blue lights than under normal survey conditions,” he says. “Since biofluorescence is ubiquitous in cryptic species, blue light looks like a very useful tool to survey animals that would otherwise be overlooked.”

There remains much to discover about fluorescence in marine life, but equip yourself with a blue light and your own yellow filters and you may see it for yourself. 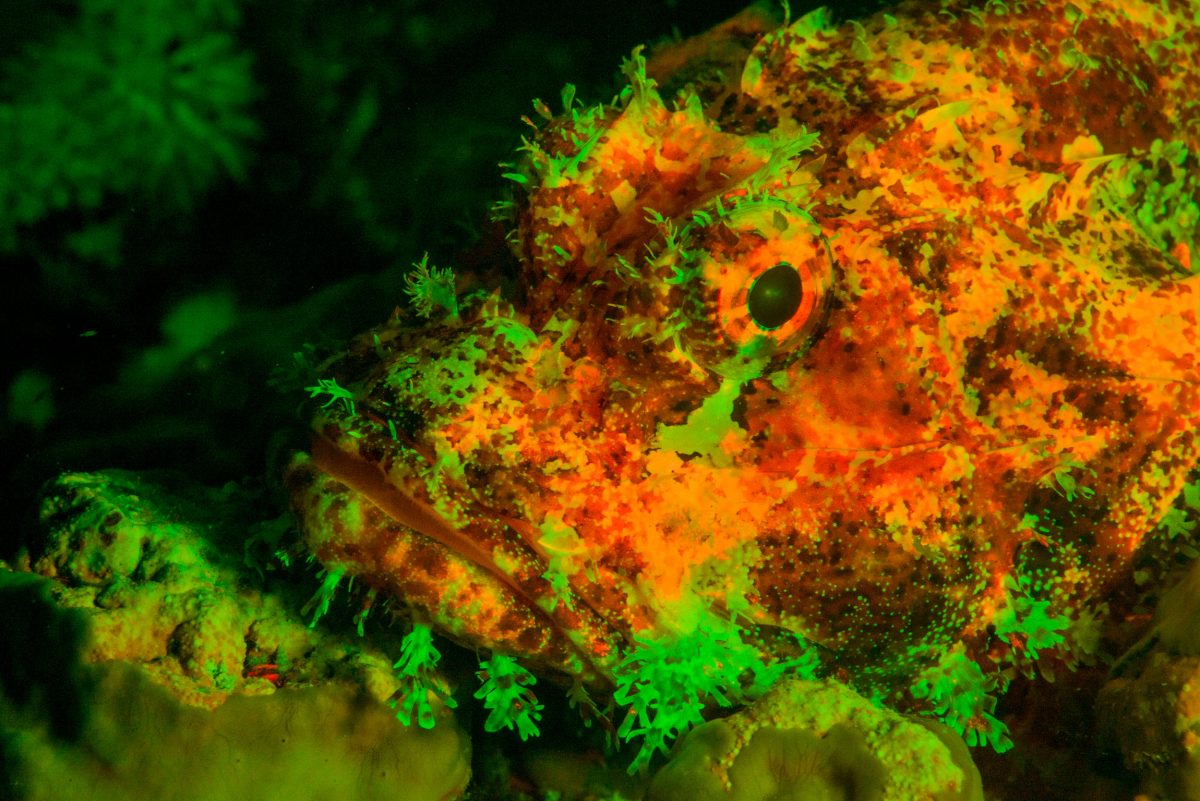 Most of the 83 cryptic species that marine biologist Maarten De Brauwer and his team documented fluorescing are predators, including the tassled scorpionfish, which hunts smaller fish and crustaceans. This particular one was found in Egypt’s Red Sea. 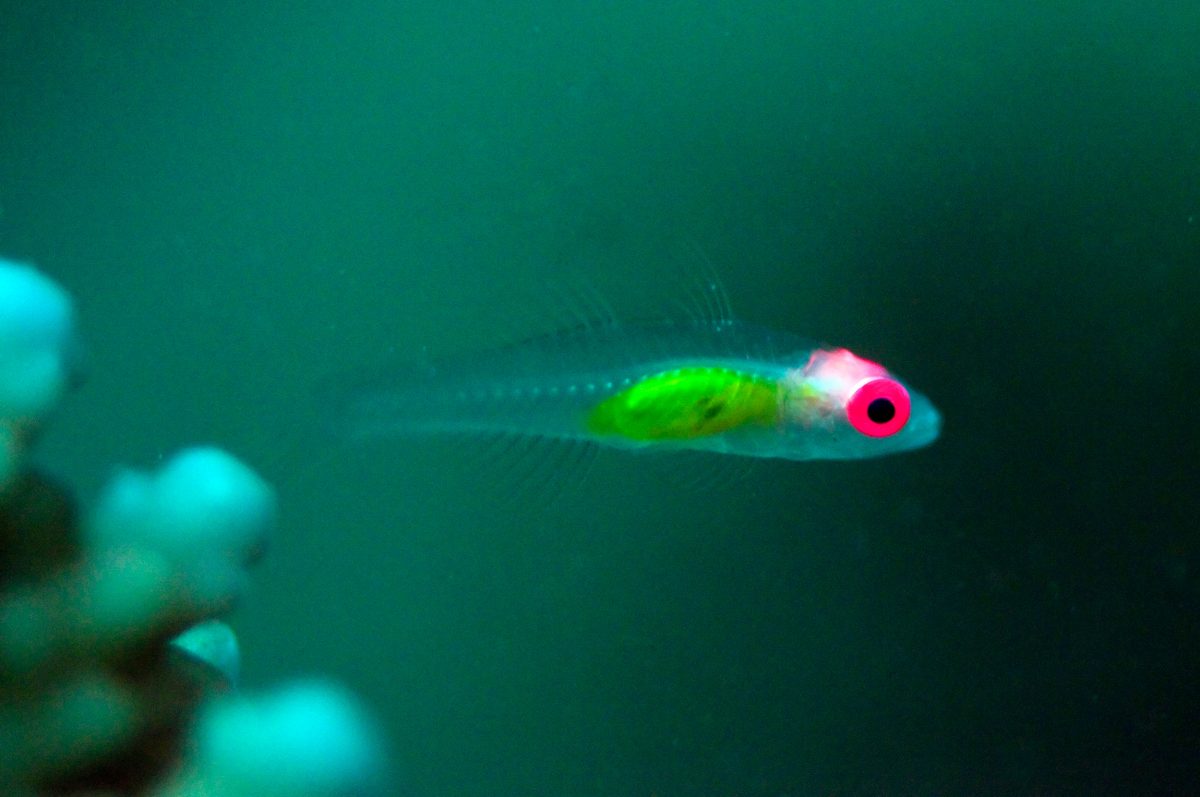 The tiny redeye goby is found in small groups swimming around Acropora coral and feeding on zooplankton. The fish has brightly fluorescing eyes, which may allow it to communicate covertly with other members of the group. This particular goby was swimming in the Red Sea. 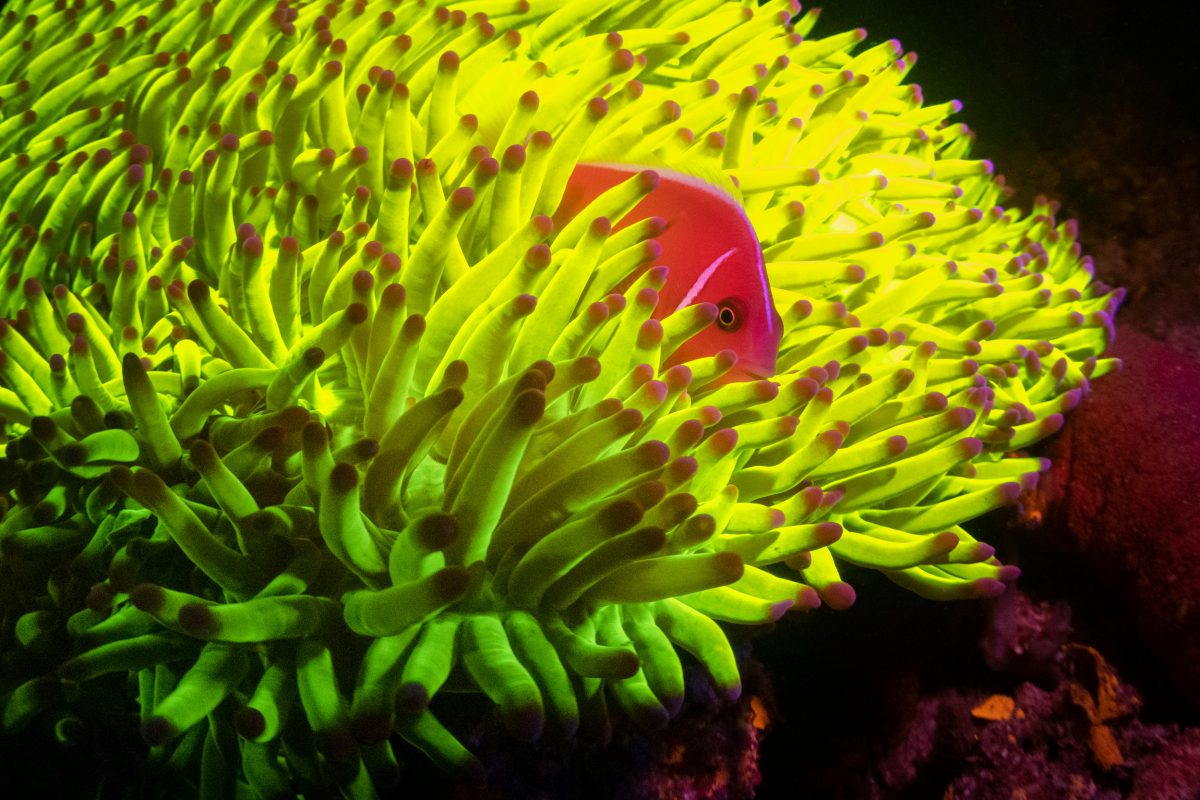 The brightly fluorescing tentacles of this anemone in the Philippines light up its resident pink anemonefish and may lure in planktonic prey for the anemone to dine on. 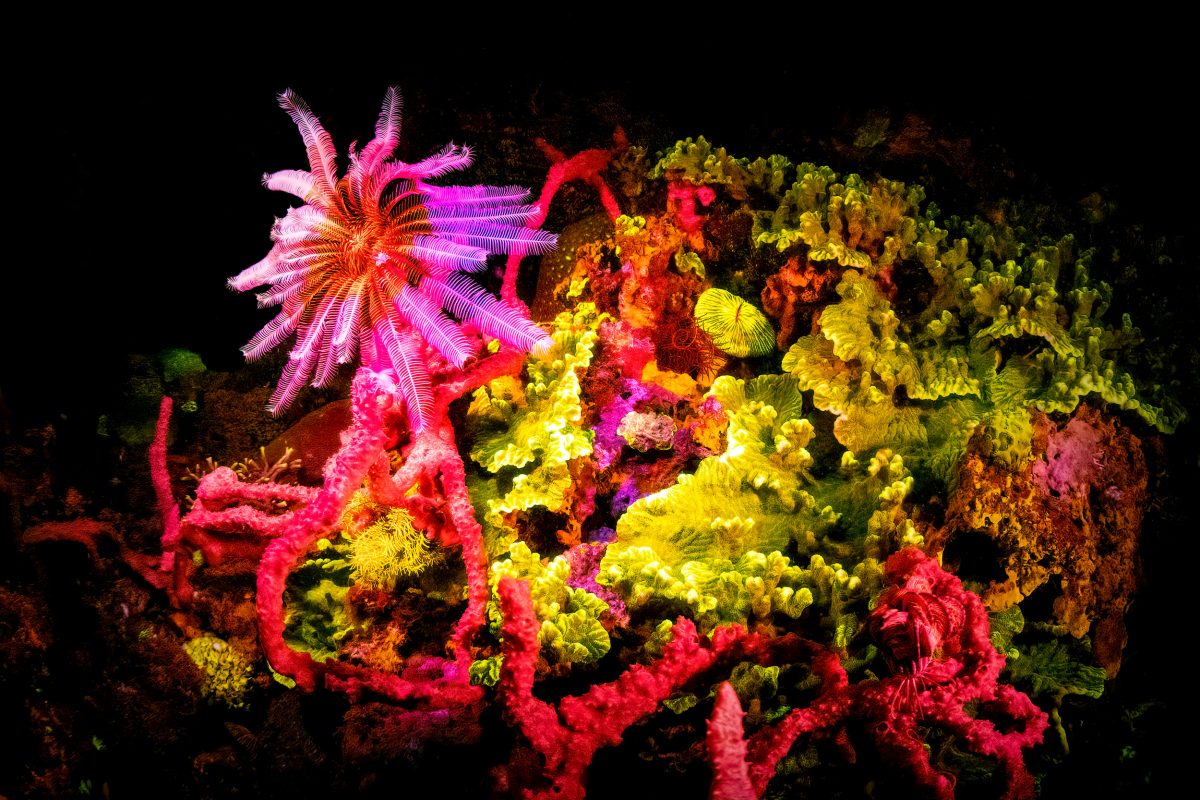 A wide-angle shot of a coral reef in Anilao, Philippines, lit with blue light at night, shows fluorescent pigments. In shallow waters, hard corals predominantly fluoresce green or yellow, while sponges and soft corals often fluoresce pink and red. Echinoderms, such as this feather star feeding in the current, may fluoresce but the reason why some individuals do is not yet known. 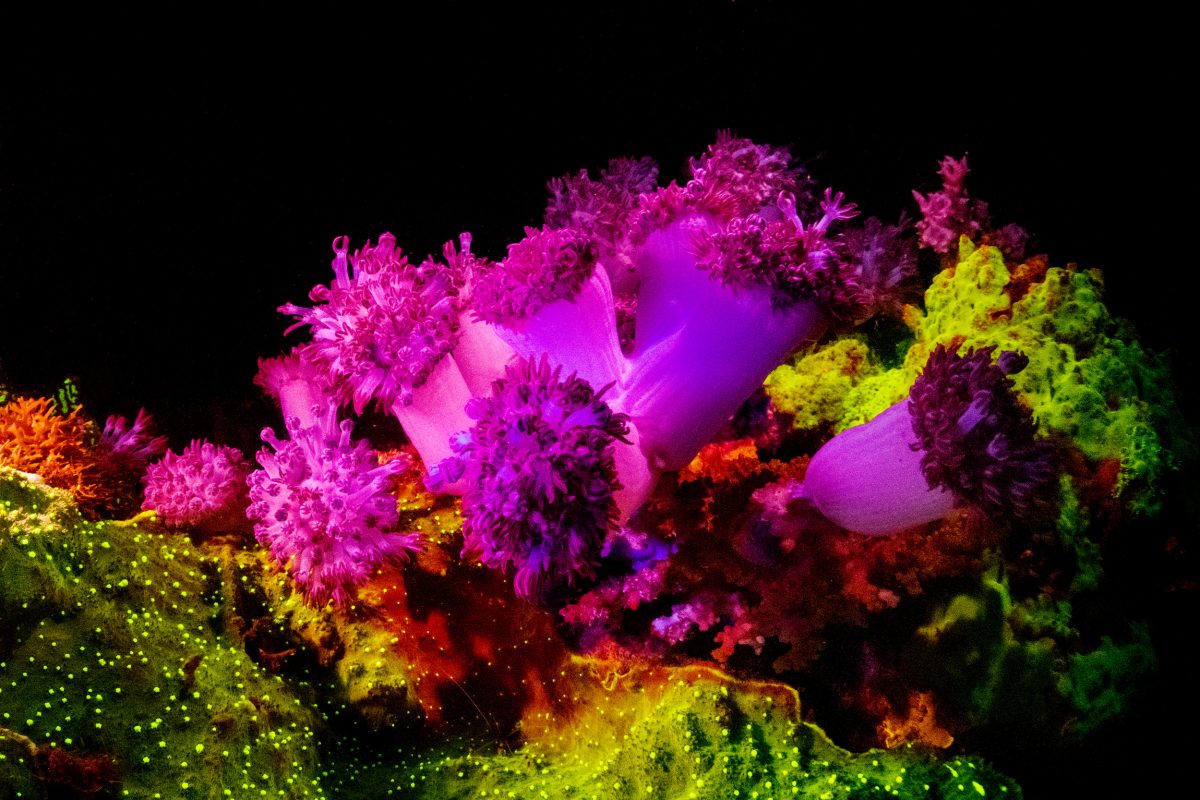 A coral reef in Dauin, Philippines, dazzles with color. 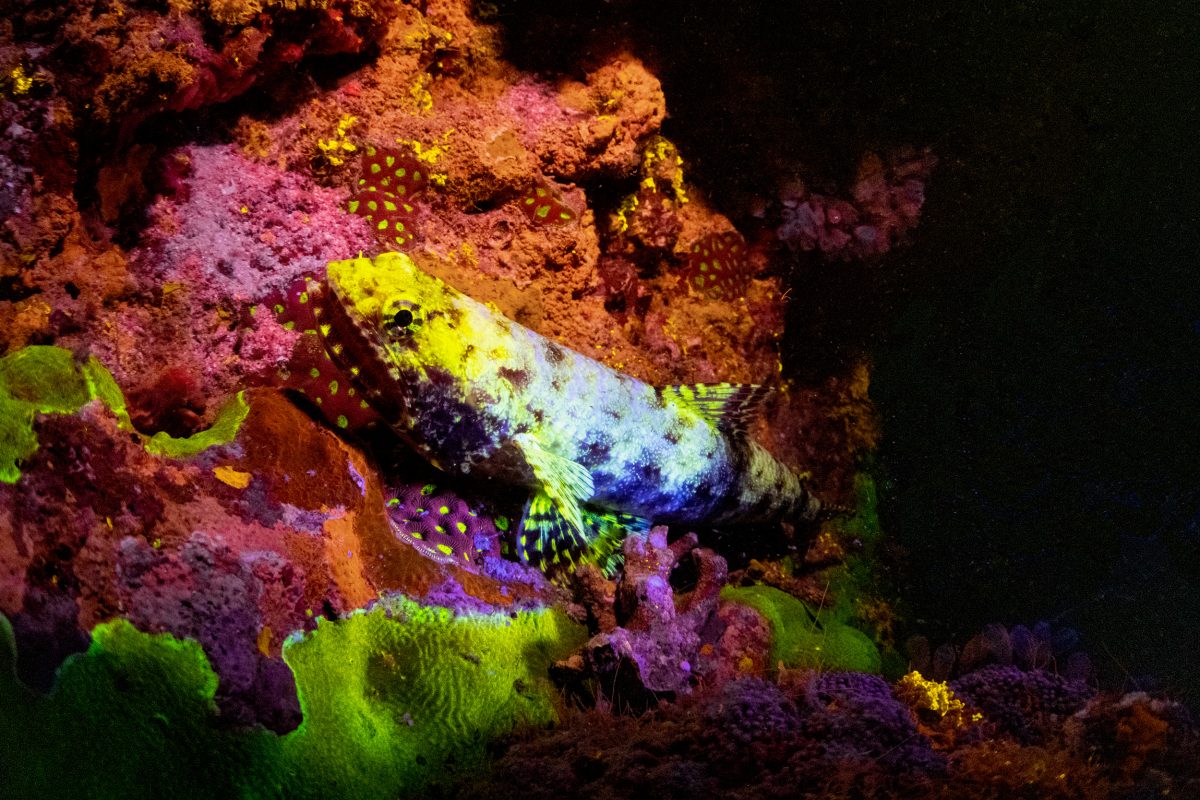 The gracile lizardfish has uneven fluorescence that might help it blend into the patchy background where it lies in wait for passing small prey fish. Photographed at Apo Island, Philippines. 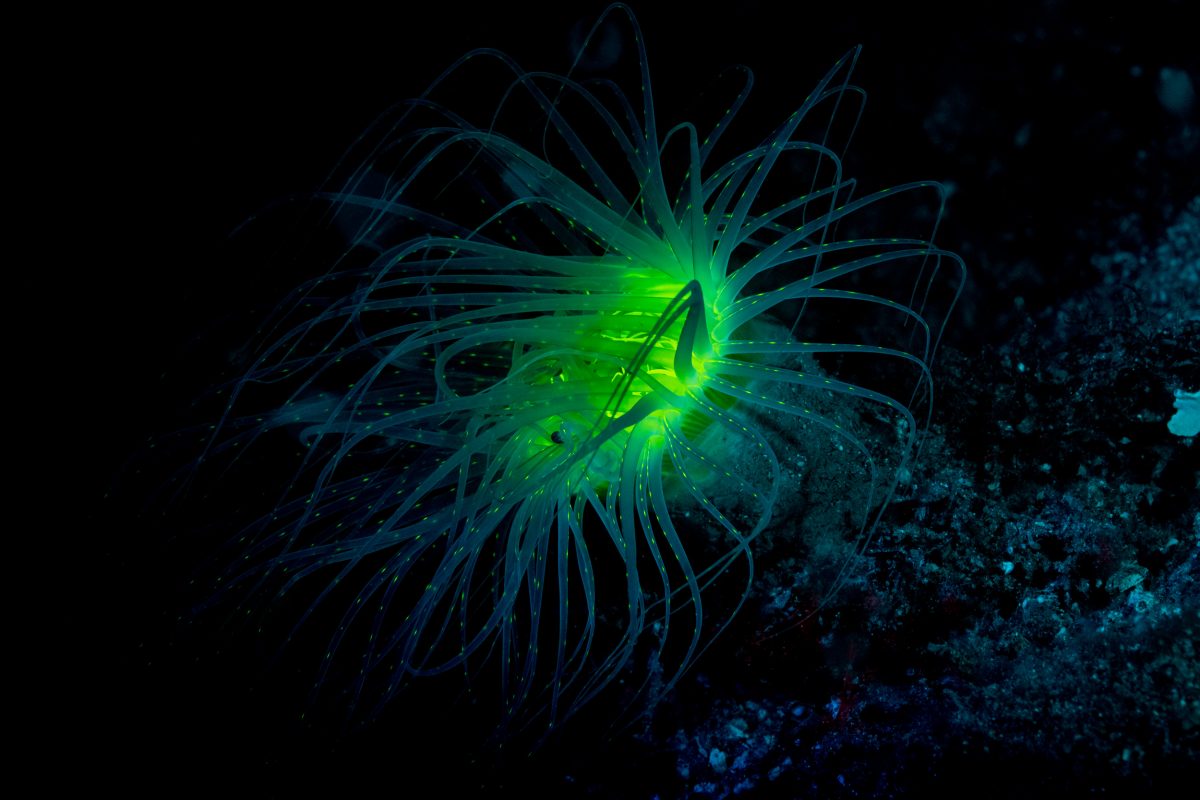 Tube anemones lie buried beneath the sand during the day. They are difficult to photograph as they are both sensitive to light and the pressure waves from an approaching diver. The strongest green fluorescence in this image surrounds the mouth of the creature, but its stinging tentacles sport green spots that may attract its planktonic prey. Photographed at Apo Island. 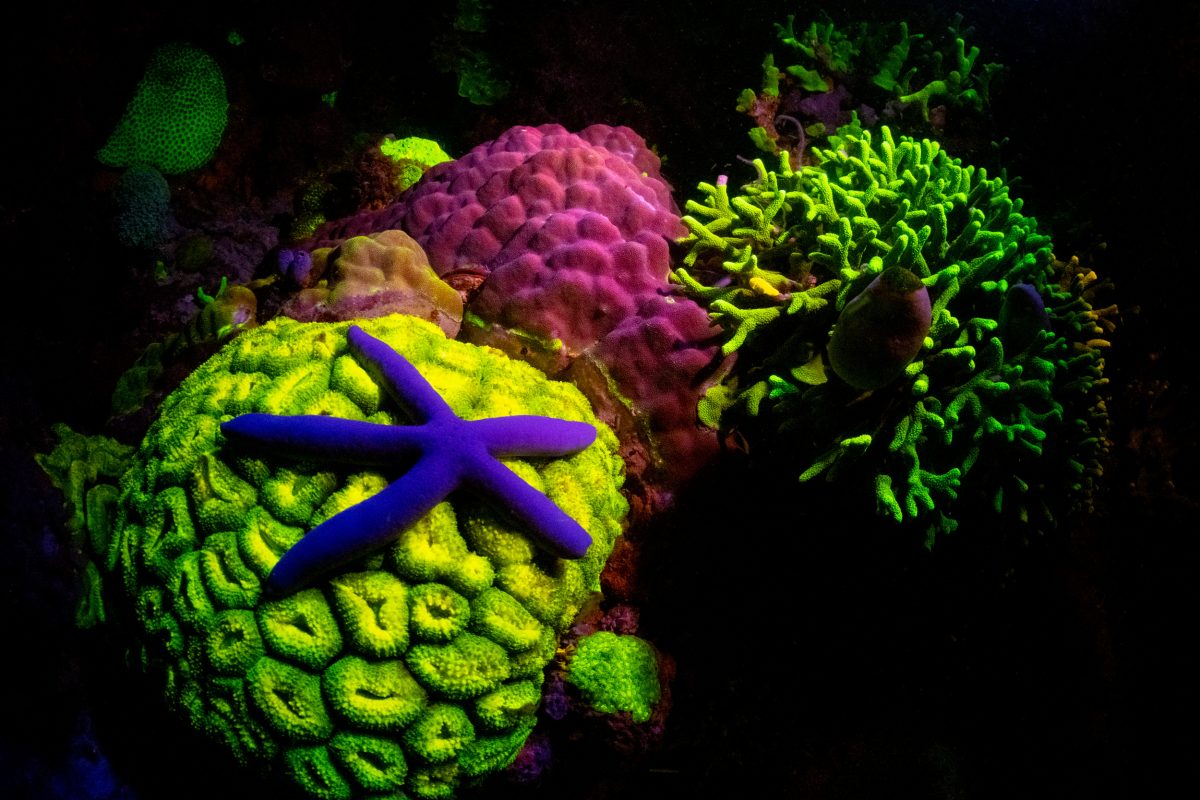 A blue sea star, which is not fluorescing, lies on top of a bright green and yellow hard coral at a reef in Dauin. 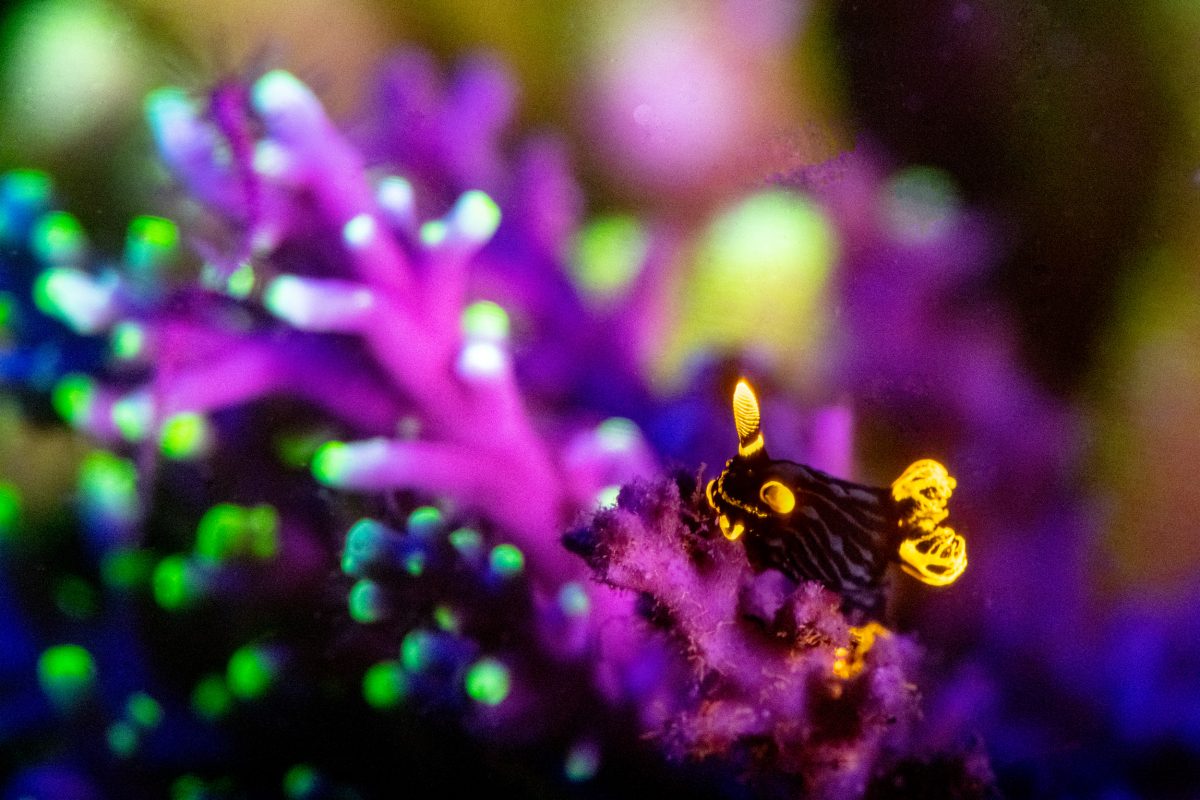 Just why the rhinophores, gills, mouthparts, and margin of this Nembrotha kubaryana nudibranch fluoresce is not known, but the pigments might serve to advertise its toxic nature to would-be predators. Photographed in Dauin. 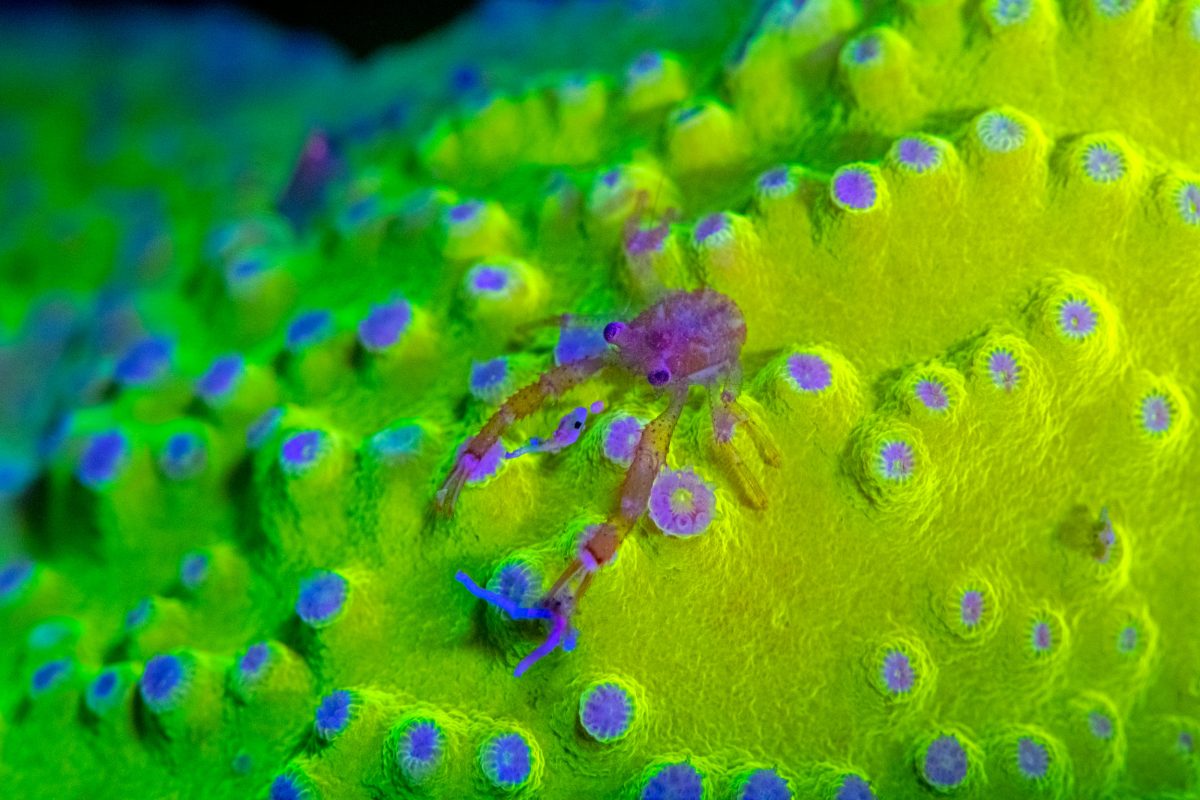 A squat lobster catching marine worms and fish larvae stands out on the surface of a brightly colored green and purple fluorescent hard coral in Dauin. 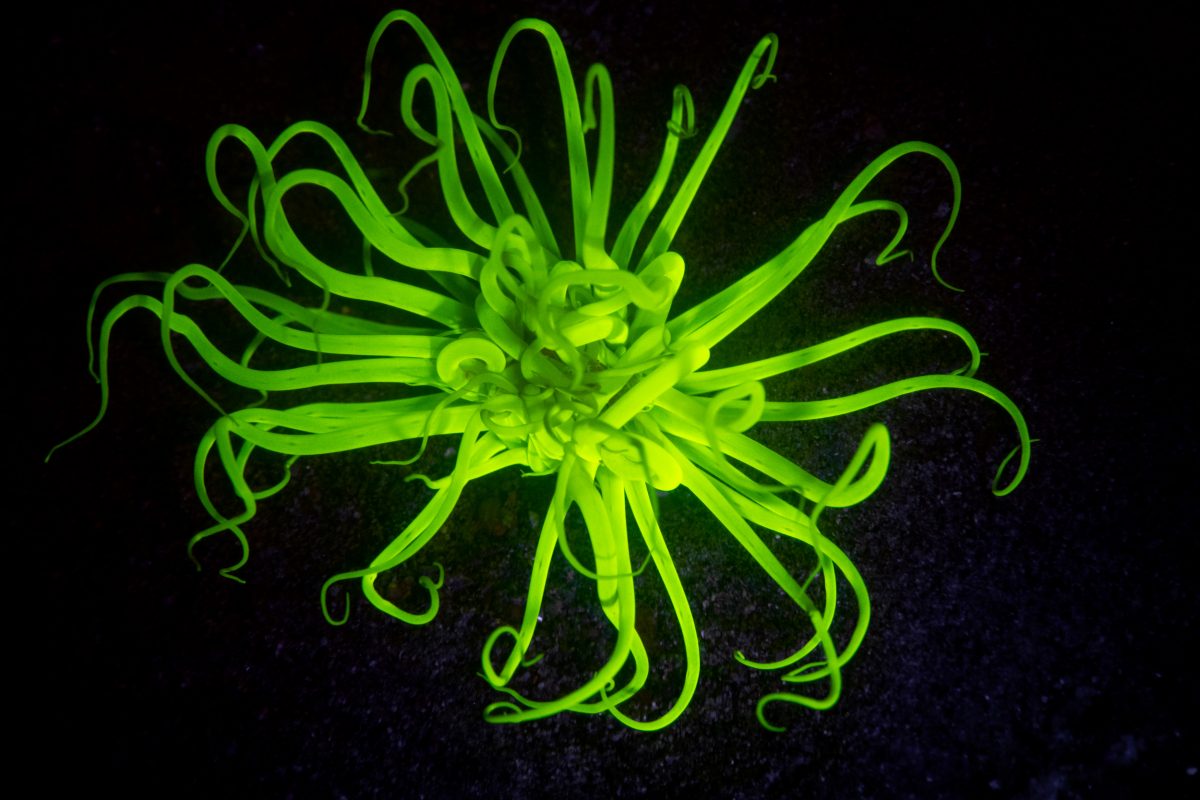 The vivid fluorescence of an anemone’s tentacles stands out against the dark volcanic sands of Dauin. 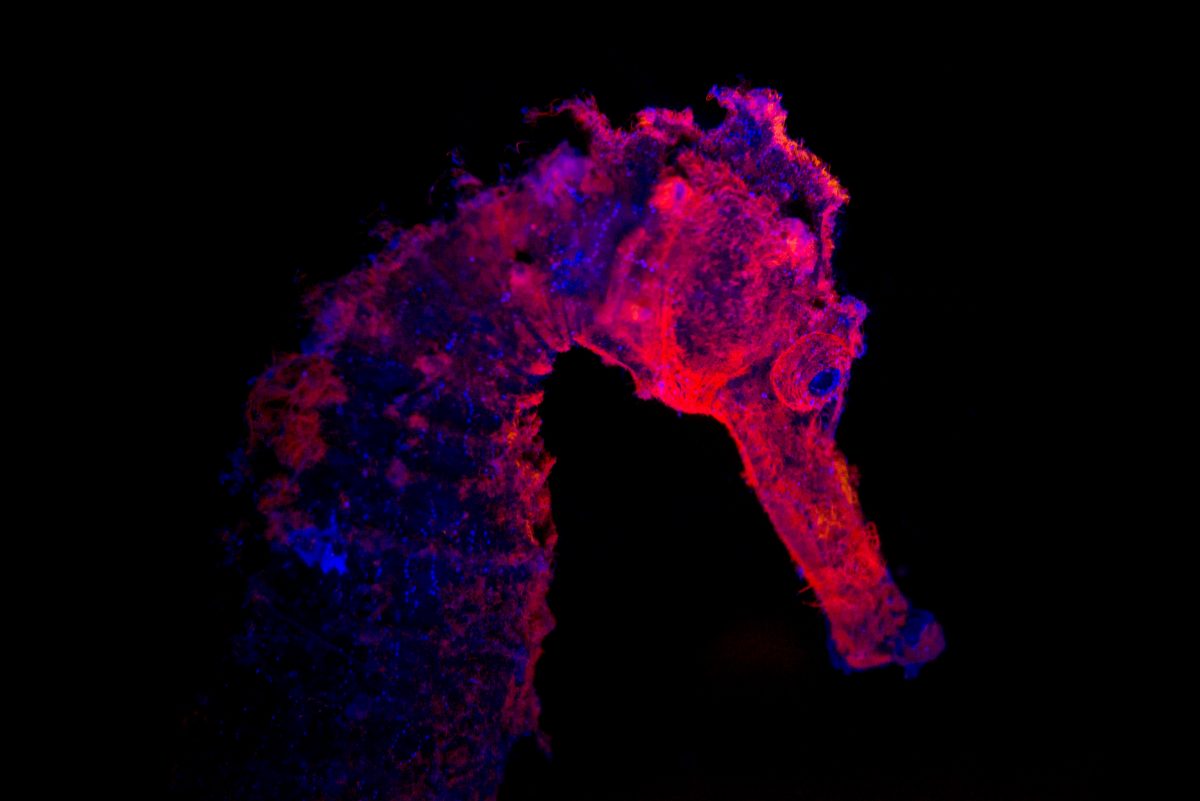 The thorny seahorse is often found with its tail wrapped around sponges or algal outgrowths. This individual, photographed in Lembeh Strait, Indonesia, fluoresced red while hunting at night. Not all individuals fluoresce. 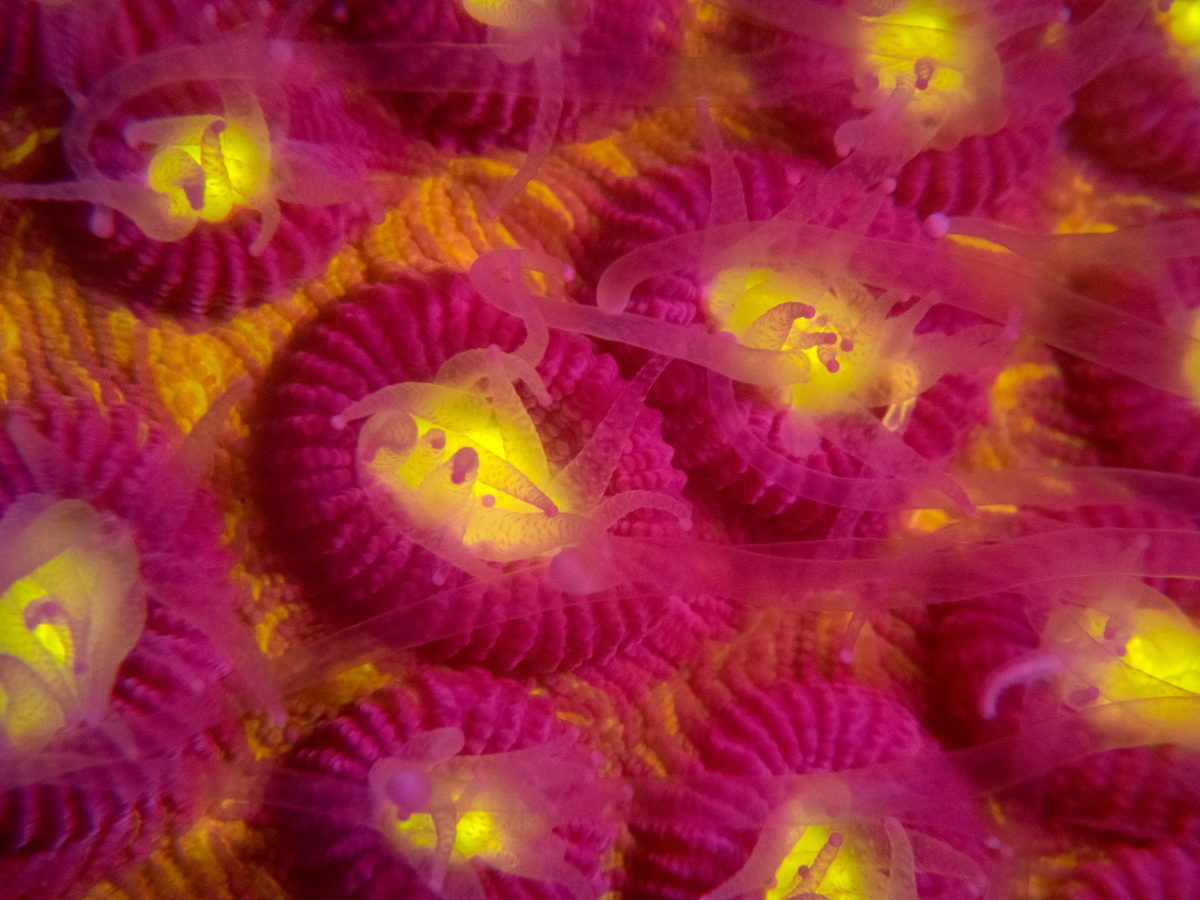 The pink tipped polyps of this coral in Dauin extend at night to catch plankton to supplement the sugars that the coral receives from the photosynthetic algae that live inside its tissues.

They made a material that doesn’t exist on Earth. That’s only the start of...