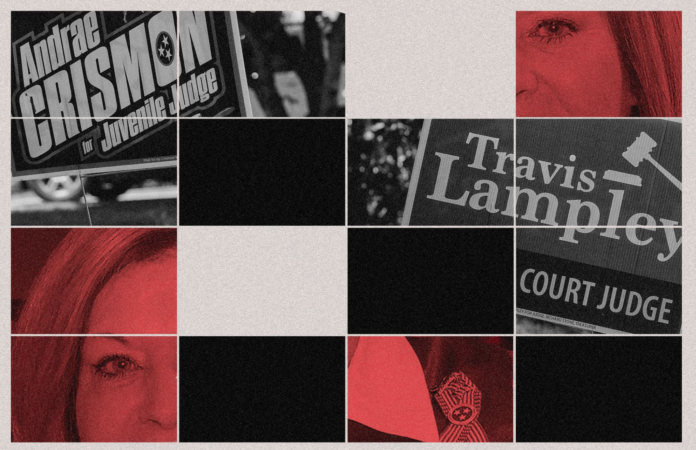 After a Nashville Public Radio and ProPublica investigation, a Tennessee judge said she was retiring. The candidate who takes her job will have to restore confidence in the system.

For two decades, Judge Donna Scott Davenport oversaw the illegal arrests and detentions of more than a thousand children in her Rutherford County courtroom.

Her decisions eventually caught up with her: The county settled a multimillion-dollar lawsuit, and an investigation by Nashville Public Radio and ProPublica brought to light what had been happening for years, unchecked. Tennessee lawmakers called for her ousting, the governor asked for a review, and Middle Tennessee State University cut ties with the judge, who taught criminal justice at the school. There were nationwide calls for reform.

As pressure mounted, Davenport announced her retirement as ​​juvenile court judge one afternoon in January, leaving voters to pick a new judge to fill her seat. Early voting starts today and runs through July 30, and election day is Aug. 4.

From the outside, her retirement might seem like the end of a painful chapter. Within the community, local pastor Vincent Windrow said, it’s far from over. “Those young children who were victimized, that’s not closure for them,” Windrow said. “Just because she’s off the bench and retired, does that mean that they won’t have nightmares? Does that mean that suddenly, miraculously, they’re going to start trusting in law enforcement again?”

That’s the level of distrust that the candidates to replace her must confront, on top of convincing voters that they have the skills for the job. The challengers are assistant district attorney Travis Lampley and pastor and Legal Aid Society attorney Andrae Crismon.

In a Republican-dominated district, Lampley has the benefit of having the letter “R” next to his name. He’s worked for a decade in juvenile courts. In a recent WGNS radio forum, he was asked how he would rebuild trust.

“I would like to think that my experience would restore confidence,” he said. He doesn’t dwell on the controversy over Davenport’s legacy. Instead, he is sharing ideas about other aspects of the job, like shortening the court’s months-long backlog.

“Justice delayed is justice denied,” Lampley said. “So the biggest obstacle is just to get in there, right the ship and plow forward.” He said he wants to establish a family preservation court, which would connect people to support systems like substance abuse programs.

Lampley comes at the position from his experience inside the courtroom. Crismon, on the other hand, is vowing to be accessible to the community.

“I earnestly believe that there’s nothing wrong with Rutherford County that cannot be turned around by what’s right with Rutherford County,” Crismon said during a meet-and-greet at a coffee shop forum. He is running as an independent because he believes it’s nonpartisan to do the right thing for kids.

And he doesn’t shy away from talking about the last judge. Crismon said Davenport operated behind closed doors. He said he hopes to turn the position inside out by hosting regular community and school meetings and educating people about what the role of juvenile court judge could be.

“We don’t want to be insular,” Crismon said. “We want to be leading the conversation of how to best deliver juvenile care services in the state. And we can do that and we can make that turnaround. But we’ve got to be willing to listen.”

Both candidates are focused on early intervention, but Crismon has proposals to keep kids out of the justice system altogether. For example, he said he’d like to work with law enforcement to create a list of juvenile offenses that would be handled with citations, instead of arrests. That resonates with community member Robbie Snapp.

“It’s not always about a child being in trouble and you need to lock them up,” Snapp told Nashville Public Radio. “Everybody doesn’t need to be locked up. Somebody needs to be helped and have a hand up, instead of pushing them down.”

She said Crismon’s history as a legal aid lawyer and a pastor demonstrates his ability to bring compassion to the bench.

Whoever wins will be stepping into the role under more scrutiny than their predecessor, and more oversight. One concrete change is that a newly appointed board will take over supervision of the county’s juvenile detention facility. That responsibility was taken away from Davenport after what happened.

But a more difficult change will be getting people to believe that the system will treat them fairly, said Dylan Geerts. He was locked up illegally by Davenport when he was 15, and was denied medication he had been prescribed for his bipolar disorder.

“A normal human being forgives when people apologize,” Geerts said. “But I mean, there’s not much to forgive, because at the end of the day, she doesn’t even think she did anything wrong.”

In announcing her retirement, Davenport said she was proud of her legacy on the court. She has since declined to be interviewed. Without her taking responsibility, making amends will fall to the candidate who takes her seat.

But Windrow, the local pastor, warned that change cannot stop there. The new judge, he said, needs to be part of reforms to Rutherford County’s criminal justice system — a system that allowed illegal detentions to happen for so long. Otherwise? “We’re just still the same horse,” he said. “We’re just changing riders.”