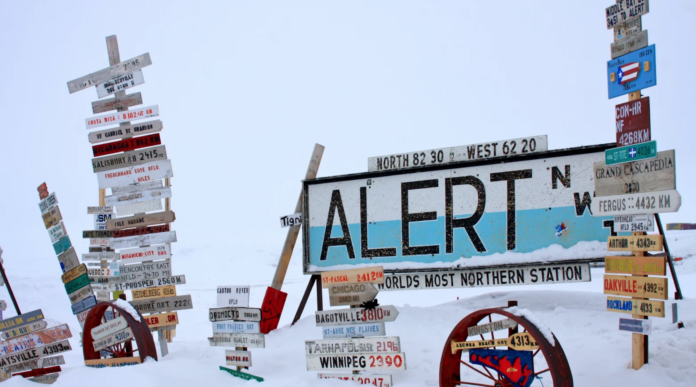 It’s not just the eastern part of the U.S. roasting this week. Much of the planet is on a heat bender, including the northernmost inhabited place on Earth.

Alert, Canada cracked 70 degrees Fahrenheit for the first time ever recorded this week. While it’s not the triple digit heat index values awaiting the U.S. this weekend, it’s in some ways even more astonishing. Alert is just a shade more than 500 miles from the North Pole, and the heat there is indicative of the changes afoot in the Arctic as the planet heats up.

“It’s really quite spectacular,” David Phillips, Environment Canada’s chief climatologist, said in a typical scientist understatement according to the Canada’s Global News. “This is unprecedented.”

While “spectacular” is one word to describe the heat, disturbing is the one I would choose. Alert is a small military base on an island in northern Canada. It’s a place known for ice, not beach weather. The average high temperature for July is around 43 degrees Fahrenheit while lows usually bottom out around freezing according to Environment Canada data.

Satellite Images Show Vast Swaths of the Arctic On Fire

The Arctic is warming twice as fast as the rest of the globe thanks to humanity’s penchant for treating the atmosphere like a carbon waste dump. The rapid warming in the Arctic has led to a series of sudden shifts upending the region. Sea ice is disappearing, wildfires are becoming more common and fierce, and Greenland is melting out at an alarming rate.

This year is just the latest manifestation of that, with Anchorage cracking 90 degrees Fahrenheit for the first time ever and the Arctic Circle has turned into a ring of fire. Sea ice, meanwhile, is tracking the trajectory of the 2012 melt season when ice bottomed out at its lowest extent on record. The National Snow and Ice Data Center (NSIDC) said in a blog post that the odds are “slim” for setting a new record in part because 2012’s low was aided by a freak cyclone that smashed apart ice. But even without a record, the amount of ice loss is staggering and also in line with recent trends. The agency wrote that “most days during the first half of July had rates exceeding 100,000 square kilometers (38,600 square miles) per day, which is similar to what has been observed over the past several years.” In comparison, the 1981-2010 average for July was around 80,000 square kilometers (30,900 square miles) per day.

All those impacts are big issues for people who call the Arctic home, but the rest of us are also being forced to suffer the consequences. Alert’s new record is, well, an alert of the dangerous path we’re on.

The Massachusetts Cannabis Industry Is A Billion Dollar Marketplace

‘The Most Comprehensive Marijuana Reform Bill Ever’ Introduced in Congress