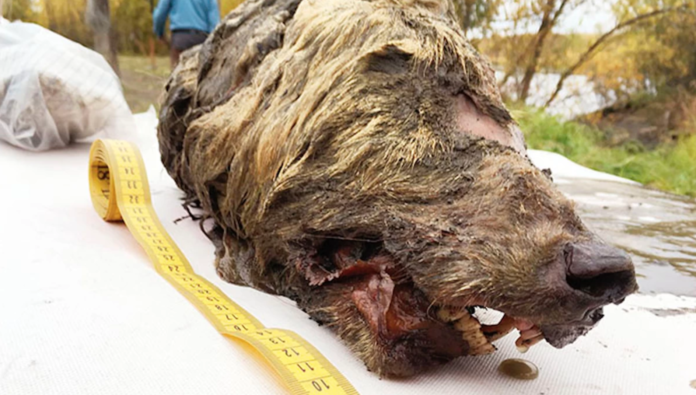 The severed head of a wolf that lived in Siberia roughly 40,000 years ago has been recovered in an astonishingly intact state, according to the Siberian Times.

Because the head was buried in permafrost, a layer of frozen soil that is ideal for preserving soft tissues, the wolf’s fur, muscles, fangs, and brain remain in good condition even after tens of thousands of years.

“This is the first time the head of an [adult] ancient wolf has been found whose soft tissue has been preserved after 40,000 years,” said Albert Protopopov, director of the mammoth studies department at the Academy of Sciences of the Republic of Sakha, according to CNN.

The head was discovered in the summer of 2018 by Pavel Yefimov, a local mammoth tusk hunter who noticed it while he was walking along the Tirekhtyakh river in the Abyysky region of the Russian Far East. Yefimov alerted Protopopov, who collaborated with an international team of scientists to establish details about the wolf’s life and death.

The researchers estimate that the wolf was between two and four years old. It’s not yet known how the wolf died, and its head was likely removed by ice movements after it was already buried in permafrost.

The wolf head is the latest of many extraordinarily well-preserved specimens that are emerging from the Arctic permafrost, which is thawing due to climate change. As exciting as it is to behold these gnarly bodies from bygone eras, it is also extremely worrisome that accelerated permafrost thaw is the reason for these new finds.

“The number of discoveries is growing because of the thaw of the permafrost,” Protopopov confirmed to CNN.

Scientists predict that permafrost thaw could release enormous amounts of stored greenhouse gases, such as carbon dioxide and methane, as well as contaminate huge regions with toxic compounds, including mercury.

Melting permafrost also poses a risk to Arctic infrastructure, and there are growing concerns that dead bodies preserved in this frozen layer could harbor infectious bacteria that could be dangerous to humans and other organisms.

“It's a Win for Us”: Striking Kellogg's Workers Get Raises, Improved Benefits & Avoid Two-Tier System

Why won’t the US medical establishment “believe women”? Covid-19 vaccines do not warn about menstrual...

Robert Downey Jr. Was Once Busted For Smoking Weed At Disneyland