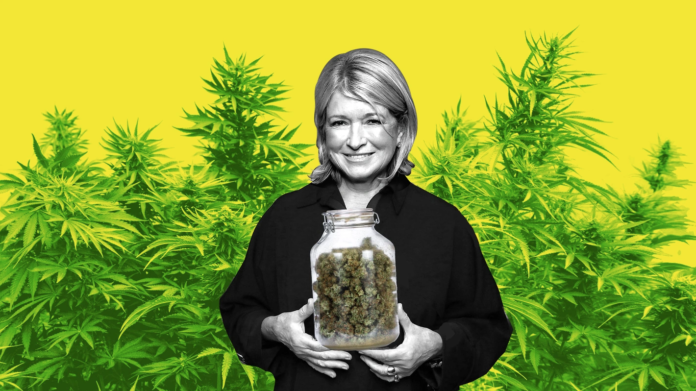 Over the past two decades, Americans have proved willing to do lots of things at Martha Stewart’s behest. They will decoupage. They will make their own holiday wreaths. They will boil pasta and tomatoes in the same pot, at the same time. Perhaps most important for Stewart, they will buy things with her name on them—bedding, cookware, magazines. Soon they might even buy Martha Stewart–branded weed.

Stewart is poised to conquer cannabis as the next frontier of domestic comfort. In February, she announced that she had become an adviser to the Canadian cannabis giant Canopy Growth, and now she is developing her own range of products, starting with a line of dog treats made with cannabidiol, or CBD. (Don’t worry, CBD doesn’t get Fido—or people—high; neither Stewart nor Canopy will say yet whether anything in her line will.)

Stewart’s announcement landed her among a small but growing group of celebrities who have seen dollar signs in the nascent market for legal weed in North America. Long a product sold primarily by historically disenfranchised young men risking prison sentences, weed is now the province of A-list actors and Super Bowl champions. Drake wants to sell you weed grown locally in his native Toronto. Football stars like Rob Gronkowski and Ricky Williams offer cannabinoid products to ease your aches and pains. As the legal weed market floods with corporations vying to be the Coca-Cola of cannabis, companies are betting that celebrities might be a shortcut to mainstream success.

Perhaps unsurprisingly, Snoop Dogg is responsible for all of this. The legendary rapper began cultivating his association with cannabis long before efforts to decriminalize it gained traction in America, and he’s seen his public persona evolve on a similar arc with weed itself: once a menace to public order and polite society, now considered by many to be harmless and fun at parties. In 2015, Snoop launched his first line of cannabis with the American company LivWell, in Colorado. He called it Leafs by Snoop. HuffPost pretty much summed it up: “This makes sense.”Snoop also brought Stewart, his good friend and cooking-show co-star, into the game. While Snoop’s American line was in development, he connected with Canopy Growth to see whether he could expand into the Canadian market. Canada federally legalized medical marijuana in 2001, so its market for corporate cannabis is a little more mature than in the U.S., where some state laws ban marijuana while others allow various levels of medicinal or recreational use. Snoop’s team “reached out through just the general ‘Contact us’ form on our website,” Jordan Sinclair, Canopy Growth’s vice president, told me. “We thought it was a hoax at first.” Snoop and Canopy launched the Leafs brand in Canada in 2016 (LivWell and Canopy have since become corporate partners), and then Snoop introduced Canopy’s executives to Stewart.

Before Stewart’s announcement in February, the major celebrities who had signed up to start weed brands were mostly the ones you’d expect: Willie Nelson, Tommy Chong, Damian Marley, and several rappers following in Snoop’s footsteps, including Wiz Khalifa and Ghostface Killah. Those celebrities come from subcultures where the penchant for smoke was never controversial. The real money, though, is likely to be made in selling to broader audiences, whose attention is trickier for weed brands to capture. “The industry is fairly strict when it comes to advertising regulations,” Sinclair said. “Promotion is very difficult, and credibility building and brand building are also very difficult.”

To make an end run around paid advertising, the weed industry has to find ways to get anxious retailers to carry their products. They need enough novelty to drum up excitement in the press—in other words, they need someone like Martha Stewart. “We didn’t expect the amount of traction that that announcement generated,” Sinclair recalled. “It was as much press and as much reach and as many stories as we generated on the day that cannabis got legalized in Canada, and we were the business that made the first legal sale ever.”

The power of celebrities like Stewart isn’t just in their counterintuitive willingness to be associated with weed, but in their position within commerce in general. Stewart “can make one phone call and get a meeting with any major American retailer,” Sinclair said. Without a beloved mainstream name attached, a company might go years before landing in the same store. “We’re essentially borrowing credibility,” Sinclair told me.

While most major North American cannabis companies have now implemented similar strategies, Canopy has had the most success with A-list celebrities. In recent months, it has announced Drake’s aforementioned cannabis brand, More Life, as well as a similar collaboration with Seth Rogen. These arrangements aren’t just endorsements, but partnerships, which are generally more lucrative in the long term for celebrities, because they involve control over branding and include profit-sharing instead of just a lump-sum payday.This celebrity strategy is one of the oldest marketing tricks in the book. But it might not make a big difference in companies’ long-term success, says Dina Mayzlin, a marketing professor at the University of Southern California Marshall School of Business. “There’s a big debate about the extent to which any advertising is effective, but at the end of the day, it’s usually more about the product, or the logistics of how you sell,” she says. “I don’t think celebrity endorsements are that powerful.”

Mayzlin points to the beginning of internet commerce as a lesson on how a new market goes from a Wild West with many competitors and little name recognition to an intensely consolidated industry. Amazon didn’t come to dominate American retail with slick ads alone. It performed its function with the most ruthless efficiency, which is what shoppers wanted.

Still, Mayzlin sees one distinct upside to cannabis’s celebrity strategy: access to massive social-media followings. “In the past, you had to pay the celebrity, but then you also paid for media, like a TV ad,” she says. “Here, you already have the media.” That’s doubly important for cannabis brands, which can’t advertise themselves like a new type of soda can.

Even Canopy readily admits that working with celebrities is quite different from developing, advertising, and selling products on its own. Drake is the Toronto Raptors’ official global hype man, and when the team recently made a run at the NBA title, the excitement threw Canopy’s development meetings with him into havoc. “We knew the priority was making sure the basketball thing is taken care of,” Sinclair told me. “If there was a big game and we had a meeting scheduled with Drake and his team the next morning, we were like, ‘Okay, let’s move this to the afternoon.’” Still, the hassle is worth it to let the millions of people who have listened to Drake rap about weed know exactly where to buy their own.