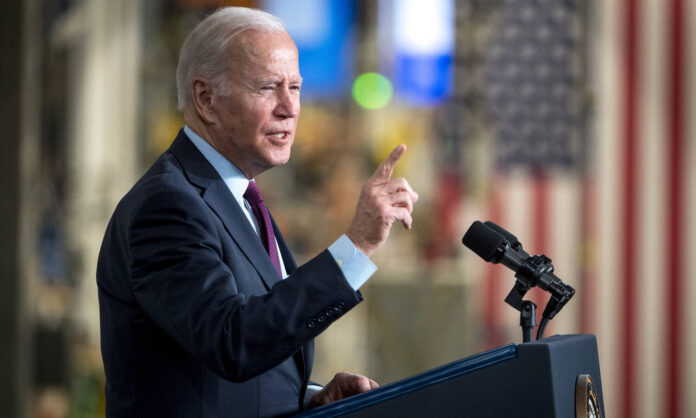 The House of Representatives approved the Marijuana Opportunity, Reinvestment, and Expungement (MORE) Act, H.R. 3617 on April 1, sending it to Senate. The MORE Act removes cannabis from the federal Controlled Substances Act, allowing states to legalize cannabis, its production and sale, free from federal interference.

What’s next? It’s up to the Senate of course. And, while many industry experts doubt the Senate will approve federal marijuana reform this year, the question also is: What will happen if the MORE Act does pass?

RELATED: President Biden Comes Under Pressure From All Sides Over His Cannabis Legalization Stance

The hierarchy says it’s up to President Joe Biden. So, the next question is: Will Biden use his presidential veto to nix the cannabis legalization bill if it reaches his desk?

According to Paul Quirk, a political scientist at the University of British Columbia in Canada, Biden “would be hard-pressed to veto” legislation that supports cannabis use because he can’t allow losing the younger generation of voters, reported Newsweek.

“Legalization is favored by two-thirds of all Americans, an even higher percentage of Democrats, and the vast majority of younger people,” Quirk said. “The 18-39-year-old age group is exactly where Biden has lost the most support since his inauguration.”

“Vetoing marijuana legalization would make Biden public-official enemy No. 1 to many of the young voters whose support he badly needs to win back,” he added.

Marsha Cohen, a law professor at UC Hastings College of the Law agrees that signing the MORE Act would enable Biden to get back some young voters, although she also thinks chances are slim that the bill will be approved in the Senate.

RELATED: Biden Administration Advises Applicants Not To Invest In Cannabis Companies, Is Federal Legalization Behind This?

“Young people may also be those least likely to be responsive to pollsters right now because they might not care. This [bill] might ‘talk’ to them,” Cohen told Newsweek.

There’s also Lisa Jordan, vice president of marketing at cannabis consultancy firm Canna Advisors, who also doubts there’s a chance Biden will refuse to sign the bill, because of “growing” public support for federal marijuana legalization in the country.

“Signing the bill would be positive for the cannabis industry and serve as a unifying topic across party lines,” Jordan said. “Without a doubt taking the final step to remove federal prohibition on cannabis would make a noticeable improvement in his ratings.”

What Is Biden’s Stance On Cannabis Legalization?

The truth is, it’s not really clear although during his 2020 presidential campaign, Biden repeatedly said he wanted to see marijuana decriminalized and prior cannabis convictions automatically expunged.

After a full year in the Oval Office, Americans have seen neither.

Although the president has been under pressure from all sides, he hasn’t budged despite numerous letters from marijuana advocates, lawmakers, celebrities, and those who have been, and still are, negatively affected by the war on drugs including those who are behind bars for marijuana-related convictions.

A poll conducted in January by YouGov and The Economist revealed that the majority of U.S. residents don’t hold out much hope that the President will make progress on this important reform in 2022. As per the survey, 54% believe that Biden made little to no progress on marijuana decriminalization; 23% said they don’t know and another 23% think he made some or a lot of progress on the matter.

On the other hand, the Biden administration recently expanded its employee conduct guidelines to potentially decline security clearances to people who supported marijuana-related businesses. Some industry experts see this as an indication of possible or imminent federal legalization and the government being prepared with its policies so as to avoid conflicts of interest.

The same day the MORE Act passed in the House of Representatives on April 1, White House Press Secretary Jen Psaki noted that the President thinks there should be a different approach to cannabis laws.

“As the president said during the campaign, our current marijuana laws are not working. He agrees that we need to rethink our approach, including to address the racial disparities and systemic inequities in our criminal justice system, broaden research on the effects of marijuana and support the safe use of marijuana for medical purposes,” Psaki said.

It is also important to note that if the MORE Act does not reach the President’s desk, there are many other cannabis-related bills in line to be considered by the Senate, like Cannabis Administration & Opportunity Act – sponsored by Senate Majority Leader Chuck Schumer (D-NY) and the States Reform Act – sponsored by Rep. Nancy Mace (R-SC).