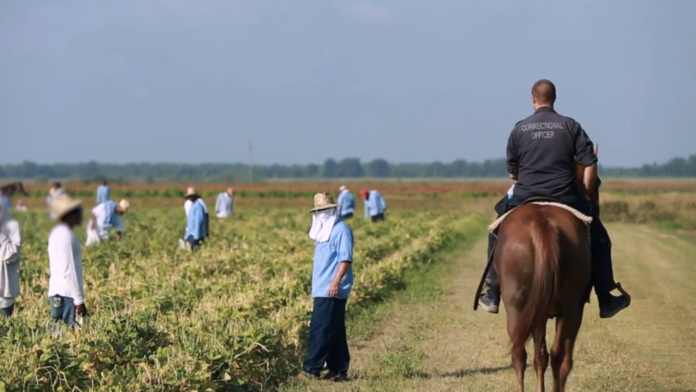 Crops stretch to the horizon. Black bodies pepper the landscape, hunched over as they work the fields. Officers on horseback, armed, oversee the workers.To the untrained eye, the scenes in Angola for Life: Rehabilitation and Reform Inside the Louisiana State Penitentiary, an Atlantic documentary filmed on an old Southern slave-plantation-turned-prison, could have been shot 150 years ago. The imagery haunts, and the stench of slavery and racial oppression lingers through the 13 minutes of footage.

The film tells two overlapping stories: One is of accomplishment against incredible odds, of a man who stepped into the most violent maximum-security prison in the nation and gave the men there—discarded and damned—what society didn’t: hope, education, and a moral compass. Burl Cain, the warden of Angola Prison, which is in Louisiana, has created a controversial model for rehabilitation. Through work and religion, they learn to help each other, and try to become better fathers to their children on the outside. Perhaps the lucky few even find redemption.

But there is a second storyline running alongside the first, which raises disquieting questions about how America treats those on the inside as less than fully human. Those troubling opening scenes of the documentary offer visual proof of a truth that America has worked hard to ignore: In a sense, slavery never ended at Angola; it was reinvented.

Some viewers of the video might be surprised to learn that inmates at Angola, once cleared by the prison doctor, can be forced to work under threat of punishment as severe as solitary confinement. Legally, this labor may be totally uncompensated; more typically inmates are paid meagerly—as little as two cents per hour—for their full-time work in the fields, manufacturing warehouses, or kitchens. How is this legal? Didn’t the Thirteenth Amendment abolish all forms of slavery and involuntary servitude in this country?

Not quite. In the shining promise of freedom that was the Thirteenth Amendment, a sharp exception was carved out. Section 1 of the Amendment provides: “Neither slavery nor involuntary servitude, except as punishment for crime whereof the party shall have been duly convicted, shall exist within the United States, or any place subject to their jurisdiction.” Simply put: Incarcerated persons have no constitutional rights in this arena; they can be forced to work as punishment for their crimes.

Angola’s farm operations and other similar prison industries have ancestral roots in the black chattel slavery of the South. Specifically, the proliferation of prison labor camps grew during the Reconstruction era following the Civil War, a time when southern states established large prisons throughout the region that they quickly filled, primarily with black men. Many of these prisons had very recently been slave plantations, Angola and Mississippi State Penitentiary (known as Parchman Farm) among them. Other prisons began convict-leasing programs, where, for a leasing fee, the state would lease out the labor of incarcerated workers as hired work crews. Convict leasing was cheaper than slavery, since farm owners and companies did not have to worry at all about the health of their workers.

In this new era of prison industry, the criminal “justice” system, the state determined the size of the worker pool. Scores of recently freed slaves and their descendants now labored to generate revenue for the state under a Jim Crow regime.

More than a century later, our prison labor system has only grown. We now incarcerate more than 2.2 million people, with the largest prison population in the world, and the second highest incarceration rate per capita. Our prison populations remain racially skewed. With few exceptions, inmates are required to work if cleared by medical professionals at the prison. Punishments for refusing to do so include solitary confinement, loss of earned good time, and revocation of family visitation. For this forced labor, prisoners earn pennies per hour, if anything at all.

Angola is not the exception; it is the rule.

Over the decades, prison labor has expanded in scope and reach. Incarcerated workers, laboring within in-house operations or through convict-leasing partnerships with for-profit businesses, have been involved with mining, agriculture, and all manner of manufacturing from making military weapons to sewing garments for Victoria’s Secret. Prison programs extend into the services sector; some incarcerated workers staff call centers.

Given the scope and scale of prison labor in the modern era, one could reasonably expect some degree of compliance with modern labor standards. However, despite the hard-won protections secured by the labor movement over the past 100 years, incarcerated workers do not enjoy most of these protections.Employment law makes the status of the worker as an “employee” a critical distinction. If you are an employee, you get protections; if not, you don’t. Courts look to the character of the relationship between the parties and aim to assess, first, whether the employer has sufficient control over the work conditions and, second, whether the relationship is primarily of an economic character.

Incarcerated persons or, more specifically, the “duly convicted,” lack a constitutional right to be free of forced servitude. Further, this forced labor is not checked by many of the protections enjoyed by workers laboring in the exact same jobs on the other side of the 20-foot barbed-wire electric fence.

Angola for Life raises questions about the potential rehabilitative nature of prison labor. Work, warden Cain posits, is an important part of the rehabilitative process. Prison labor provides a way to pay society back for the costs of incarceration, as well as a pathway to correct deviant behavior and possibly find personal redemption.

Meaningful work helps cultivate self-esteem, self worth, and the sense that one’s existence on this Earth matters. Yet, while some form of work for the incarcerated may be important, the current form is troubling. These workers are vulnerable to the kind of workplace exploitation that America has otherwise deemed inhumane.

Another justification for compulsory prison labor comes from a fairness concern. Why should prisoners sit with idle hands when the rest of us must work to put a roof over our heads and food in our bellies? Perhaps the low-to-no wages paid to incarcerated workers are a form of pay garnishment, a sort of compensation for the costs of room and board?

Yet those costs are not fairly calculated. The American criminal-justice system is rife with fees that shift the financial burden of incarceration to the charged and convicted and their families. Like the “company store” in isolated mining towns which overcharged workers of old, prisoners are left open to similar forms of exploitation.

Finally, some would argue that regardless of its harsh nature, prison labor is simply a matter of just deserts. Don’t workers behind bars deserve less than equal treatment? After all, they are murderers, criminals, all manner of sinners and deviants. The appeal of this argument lies in its simplicity: People who do not behave like decent human beings do not merit being treated like decent human beings.There is much to say of the inadequacy of this sort of eye-for-an-eye philosophy and the importance of resisting such a reflex in the realm of state action and public policy. As Ta-Nehisi Coates described in his Atlantic cover story, a series of risk factors—including mental illness, illiteracy, poverty, and drug addiction—drastically increase the chance that one will end up among the incarcerated. By one report’s measure, more than half of the inmates in jails and prisons in the United States are suffering from mental illness of some kind. These risk factors are social-welfare and public-health issues. America makes the choice to respond to these outcomes with the penal system, but there are other ways.

There is one further reason to be concerned about the system of prison labor. A brief moment of dialogue in the first few minutes of the video between the inmate driving a buggy and the Atlantic’s Jeffrey Goldberg hints at this:

Reporter: What was the charge?

Reporter: Did you do it?

Maybe we believe him. Likely we don’t. Whether we believe this particular inmate or not, ample experience and research point us to an uncomfortable reality: There are innocent men at Angola. We don’t know which they are, but we do know they are there, and they are disproportionately likely to be black. In American criminal justice, “duly convicted” doesn’t always mean what we wish it to.

Individual stories are compelling. For the slave toiling in the antebellum south, a kindly master was a godsend. Burl Cain may be the very best that the inmates of Angola prison could hope for, a rare thoughtful, kindly, creative sort of warden. He is almost certainly a man trying to do the best he can for a population damned and forgotten by society with the resources he has available.

But individual narratives are not enough. When we focus on the individual, it’s easy to miss the context. The context here is undeniable, and it is made clear by the very first frames of Angola for Life.

As the camera zooms out and pans over fields of black bodies bent in work and surveyed by a guard, the picture that emerges is one of slavery. It is one of a “justice” system riddled with racial oppression. It is one of private business taking advantage of these disenfranchised, vulnerable workers. It is one of an entire caste of men relegated, as they have long been relegated, to labor for free, condemned to sow in perpetuity so that others might reap.