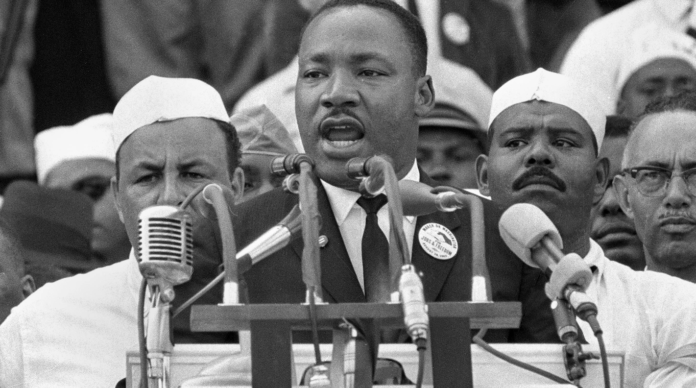 One common response to the national anthem protests originated by Colin Kaepernick is to disparage them as polarizing. Joe Scarborough, host of Morning Joe, summed up this particular critique in a tweet:

This may be unpopular but it is a political reality:

Every NFL player refusing to stand for the national anthem helps Trump politically.

The idea here is that kneeling NFL players are committing an act of such blatant disrespect that they hand Trump an easy image with which to demagogue. Often attendant to the idea that protesting players are shooting themselves in the foot is the notion that in some other era, black protest proved to be a unifying force that altered the psychology of some critical mass of open-minded whites.

David Leonhardt offers a version of this in Monday’s New York Times:

In one of his first prominent speeches, during the 1955 Montgomery bus boycott, Martin Luther King Jr. spoke of “the glory of America, with all its faults.” At the March on Washington, King described not just a dream but “a dream deeply rooted in the American dream.” Before finishing, he recited the first seven lines of “My Country, ’Tis of Thee,” ending with “Let freedom ring!”

Leonhardt goes on to contrast this species of activism, which aligned “the civil-rights movement with the symbols and ideals of America,” with kneeling during the national anthem, which presumably signals opposition to those same symbols. Leonhardt is sympathetic to the aims of Kaepernick’s protest but he contrasts this “angry” approach with the “smart” approach of the civil-rights movement.

There’s a lot of ground covered in this column, and not all of it thoroughly. Leonhardt’s rendering of the civil-rights movement, for instance, implies a kind of direct and seamless chain of events, from the March on Washington’s invocation of American ideals, to growing white support, to the passage of the Civil Rights Act. This elides self-interested motives for civil-rights reform—the influence of the Cold War, the threat of urban rebellion—in favor of warm and fuzzy ones.The trajectory of Leonhardt’s argument is doomed by the defective pad from which it was launched. The problem here is not just a just-so chain of events, but the actual effects of the events. Implicit in Leonhardt’s critique is the idea that Martin Luther King and other civil-rights pioneers, and their protests, were better able to appeal to the hearts of white Americans than Kaepernick and his allies. Leonhardt cites a Yougov poll showing that “only 36 percent consider the kneeling protest to be ‘appropriate.’” This might be damning if not for the fact that the very civil-rights movement Leonhardt cites was generally thought to be equally, if not more, inappropriate.

As The Washington Post noted last year, only 22 percent of all Americans approved of the Freedom Rides, and only 28 percent approved of the sit-ins. The vast majority of Americans—60 percent—had “unfavorable” feelings about the March on Washington. As FiveThirtyEight notes, in 1966, 63 percent of Americans had a negative opinion of Martin Luther King. The popular hostility toward King extended to the very government he tried to embrace—King was bugged and harassed by the FBI until the end of his life. His assassination sprang from the deep hostility with which he was viewed, not by a fringe radical minority, but by the majority of the American citizenry.

That the civil-rights movement was unpopular is not shocking to the activists who protested at the time. “When I’m told by people, ‘Thank you for what you did,’ I almost want to look around and see who they’re talking to,” Joyce Ladner told the Post.* The paper quotes Julian Bond satirizing the kind of history Leonhardt’s argument is premised—“Rosa sat down, Martin stood up and then the white folks saw the light and saved the day.”

Reading this you would think Blanche Lincoln was primaried, that Alison Lundergan Grimes was done in by her implacable leftist fanaticism, that Evan Bayh never ran in 2016, that Bob Casey wasn’t pro-life, that Joe Manchin wasn’t a senator. But more, you’d think that “smart” necessarily equated with “centrist.” In fact, the very history Leonhardt summons says the opposite.

Whatever symbols they embraced, civil-rights activists—much like black activists today—never successfully connected with the hearts of the majority of adults of their own day. The process was neither neat nor particularly unifying. In fact, it destroyed the Democratic Party of Roosevelt and Truman. But the activists did sketch a theater of violence, with men like Bull Connor in starring roles, that shamed and embarrassed the country. And aided by an intemperate radicalism within and the Cold War threat without, the activists were able to use that shame to affect meaningful change.Perhaps most importantly they affected the attitudes of the children of those white Americans who scorned them. This points to the true target, in terms of white people, of Kaepernick’s protest. The point is not to convince people who boo even when a team kneels before the anthem is sung. The point is to reach the children of those people. The point is the future.

Kaepernick did not inaugurate his protest in hopes of helping elect more centrist Democrats, or any kind of Democrat. That said, he was not immune to compromise. When his initial efforts were met with disdain and deemed disrespectful, he actually consulted a group of veterans to see how he might better pursue a protest. That is the origin of Kaepernick kneeling, and the fact that it too has been met with scoffs points to deeper problem. If young people attempting to board a bus are unacceptable, if gathering on the National Mall is verboten, if preaching nonviolence gets you harassed by your own government and then killed, if a protest founded in consultation with military veterans is offensive, then what specific manner of protest is white America willing to endure?

It’s almost as if the manner of protest isn’t the real problem.