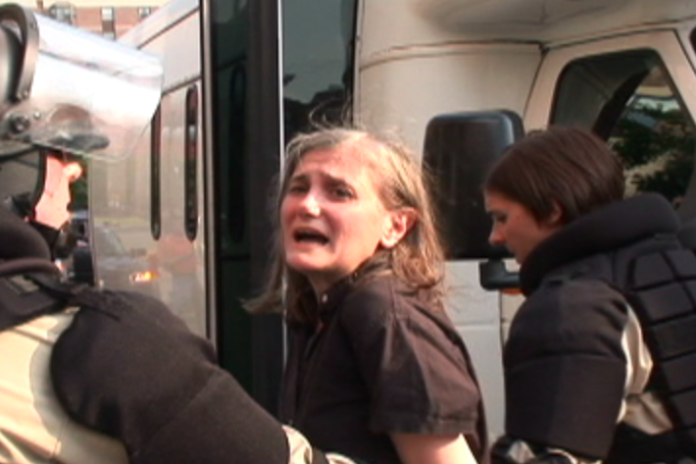 Note from 5/29/20: Following today’s arrest of CNN reporter Omar Jimenez in Minneapolis, we are highlighting our past coverage of the 2008 arrest of Democracy Now’s Amy Goodman and two producers while they covered the Republican National Convention in St. Paul, Minn.

On Monday, we reported a final settlement has been reached in a lawsuit filed by Democracy Now! host Amy Goodman, along with producers Sharif Abdel Kouddous and Nicole Salazar, challenging the police crackdown on journalists at the 2008 Republican National Convention in St. Paul, Minnesota. We play excerpts of a news conference of our announcement, held yesterday in Zuccotti Park in Lower Manhattan, where hundreds are camped out with the Occupy Wall Street protest. We were joined by our attorneys to announce the settlement, Steven Reiss of Weil, Gotshal & Manges, and Anjana Samant of the Center for Constitutional Rights. “There is a reason why freedom of the press is in the First Amendment. Because without freedom of the press, there is no democracy,” Reiss says. “That is a lesson that applies not just abroad. We have seen many times in recent months abroad, it applies here as well.” [includes rush transcript]

Related Column: Why We Were Falsely Arrested

AMY GOODMAN: As we reported in yesterday’s headlines, a final settlement been reached in our federal lawsuit challenging the police crackdown on journalists at the 2008 Republican National Convention in St. Paul. Democracy Now! producers Nicole Salazar, Sharif Abdel Kouddous and I filed the suit last year against the Minneapolis and St. Paul Police Departments, the Ramsey County Sheriff and Secret Service personnel. The lawsuit challenged the policies and conduct of law enforcement during the 2008 RNC that resulted in our arrest.

We were among dozens of journalists arrested that week in St. Paul. More than 40 were arrested. On September 1st, 2008, the opening day of the convention, Nicole and Sharif were covering a police crackdown on a street protest. Nicole’s camera captured her arrest and assault by the officers. As the riot police came at her, shouting, “On your face!” she shouted back, “Press! Press!”

POLICE OFFICER: Get out of here! Move!

POLICE OFFICER: Get out of here!

NICOLE SALAZAR: I’m on my face!

POLICE OFFICER: Get down on your face!

AMY GOODMAN: That was Democracy Now! producer Nicole Salazar screaming as the riot police took her down, bloodying her face. Sharif Abdel Kouddous was arrested next. I rushed to the scene and asked to speak to a commanding officer to get Sharif and Nicole, accredited journalists, released, whereupon I was ripped through the police line and arrested.

POLICE OFFICER: Ma’am, get back to the sidewalk.

AMY GOODMAN: Sir, just one second. I was just running from the convention floor.

AMY GOODMAN: Sir, I want to talk to your superior.

AMY GOODMAN: Do not arrest me!

POLICE OFFICER: Everybody, you cross this line, you’ll be under arrest, so don’t do it.

AMY GOODMAN: Well, on Monday, Sharif Abdel Kouddous and I held a news conference at Zuccotti Park in Lower Manhattan, where hundreds are camped out with the Occupy Wall Street protest. We were joined by our attorneys to announce the settlement. We begin with Steven Reiss of Weil, Gotshal & Manges.

AMY GOODMAN: Thank you all for coming out. It is very important that we reached this settlement today with the St. Paul, Minneapolis, police and the U.S. Secret Service, to challenge how the authorities are dealing with press at public events.

On September 1st, 2008, my colleagues and I were covering the first day of the Republican convention in St. Paul. I was on the convention floor interviewing delegates. Sharif Abdel Kouddous and Nicole Salazar, Democracy Now! producers, were out on the streets covering the protests. I got a call on the convention floor that Sharif and Nicole had been arrested and had been injured. I raced to 7th and Jackson, the parking lot where I heard they were. The riot police had formed a line, had fully contained the area. I went up to them, asked to speak to a supervising officer to have my colleagues released. They were credentialed like I was, very clearly. I was wearing the top security credentials that allow me to interview presidents and vice presidents, congressmen and delegates, issued by the authorities. It wasn’t seconds before the police ripped me through the police line, twisted my arms back, slapped the handcuffs on, pushed me up against the wall and onto the ground. I was pleading with them not to arrest me, but that’s precisely what they did.

I was then brought over to Sharif Abdel Kouddous. His arm was bloodied. He was handcuffed. We were saying very clearly, “You must release us now. We are wearing our press credentials,” whereupon the Secret Service came over, and they ripped the credentials from around our necks. I was then taken to the police van, where Nicole was, Nicole Salazar. She was handcuffed. Her face was bloodied. And she described quickly what happened. She said they had been covering the peaceful protests when I was covering the convention, that the riot police had moved quickly in on them. They were in a parking lot. She was backed against the parked cars, as they shouted, “On your face!” She filmed, but at the same time showed her press pass and shouted, “Press! Press!” They took her down from in front and behind, onto the ground, her face in the ground. They had a knee or boot in her back. They dragged her leg, which was bloodying, her face in the ground.

The first thing the police did was pull the battery out of her camera, if you were wondering what they wanted to stop happening. Nicole was doing her job. She was recording the public protest outside the conventions, which was supposed to be a celebration of democracy. Sharif was there. Sharif Abdel Kouddous, our senior producer, told the riot police to calm down. They pushed him up against the wall, kicked him twice in the chest, bloodied his arm. They face felony riot charges. I was arrested with a misdemeanor. They took me to the police garage, where the cages were erected for the protesters. Sharif and Nicole were taken off to jail.

We were held for hours, ultimately released because of the thousands, if not tens of thousands, of people from around the country who responded to the video that was put up by independent reporters. The video of our arrest went viral, the most watched YouTube video the first two days of the convention. We believe that is what freed us: the response, the outrage of people around the country.

We were simply doing our jobs. It is our job not only to be on the convention floor, but to be covering the corporate suites, to find out who’s covering these conventions, who is sponsoring these conventions, and also to be in the streets, where the uninvited guests are, the thousands of people who also have something very important to say. Democracy is a messy thing, and it’s our job to capture it all, and we shouldn’t have to get a record when we try to put things on the record.

We were not alone in our arrests. More than 40 reporters were arrested. Let this send a message to police departments around the country, as we move into the next conventions in Charlotte and Tampa, that the police must not violate our freedom to cover what is happening in the streets. It is not only a violation of freedom of the press, but a violation of the public’s right to know. And we are particularly gratified to have come out of this settlement with the training agreement on the part of the St. Paul Police Department, working with the Center for Constitutional Rights and the ACLU and the Reporters Committee for Freedom of the Press to come up with a training manual and a training process, so that the St. Paul police—and they will urge the Minneapolis police and the state police to do the same—will be trained in how to deal with reporters, not to engage in arrests of reporters or to engage in unlawful arrests at all.

ANJANA SAMANT: Hello, everyone. My name is Anjana Samant. I’m the attorney from Center for Constitutional Rights. I also worked on this case. I just want add that, you know, in recent years, we’ve seen a resurgence, a resurgence of public protest, of social activism. In moments like these, today, it’s no coincidence that we’re standing here today and holding this press conference where Occupy Wall Street has been going on.

The settlement in this case is a great reminder and an excellent victory not just for journalists, but also for the public and the Constitution. We have to make sure that we can exercise these rights, that the police do not engage in a preemptive arrests, that the police do not overstep their authority when they’re exercising their powers. We need to make sure that as these protests, as the presidential conventions next year happen, as movements like the one we’re in—standing in the middle of today continue, that these voices get disseminated across the country. The First Amendment does not only allow embedded reporters. The First Amendment does not only allow the government to sanction and permit one viewpoint. It has to allow every camera and every voice and every journalist to speak without any kind of censorship or repression.

SHARIF ABDEL KOUDDOUS: The reason we brought this lawsuit is because we want to stop police acting with impunity, arresting journalists in covering demonstrations. This is a right that is enshrined in the Constitution.

I flew in for the settlement conference from Cairo, Egypt, where I live right now. I grew up in Cairo, and I have lived there since the revolution. The way we lived in Cairo for many decades was under a police state. And what that means is, is that the police rule the state. And so, in demonstrations in Egypt, what would happen is the police would come in, they would beat protesters, they would arrest journalists, they would get sent to jail, and many would have long-term prison sentences. That all changed on January 25th, when people took to the streets in a revolution, and they beat back the police, and they went into Tahrir Square and started a sit-in that ended after 18 days with the autocrat, a 30-year autocrat, Hosni Mubarak, leaving power. That sit-in has in some ways inspired street demonstrations around the world, including this one, where we are speaking to you right here, this Occupy Wall Street demonstration.

We have seen the police again act with the same kind of impunity that they acted in 2008. They have [pepper-sprayed] peaceful protesters. They arrested 700 protesters on Saturday, [one of] the largest mass arrest in U.S. history. We hope that this settlement, both the financial settlement and the training that the St. Paul police, and hopefully Minneapolis police and statewide, will have to undergo, learning how to treat journalists covering demonstrations and also citizens covering demonstrations, as well, that they cannot act with this kind of impunity, that there is some kind of punishment that will eventually come.

AMY GOODMAN: Sharif Abdel Kouddous, speaking on Monday at the news conference in Lower Manhattan at Zuccotti Park, announcing the settlement that Sharif, Nicole Salazar and I have reached with St. Paul and Minneapolis police and the U.S. Secret Service. After the break, we’ll be joined by Sharif Abdel Kouddous, live here in the studio, to talk about the latest in Egypt, just before he heads back there later today to continue his reporting.