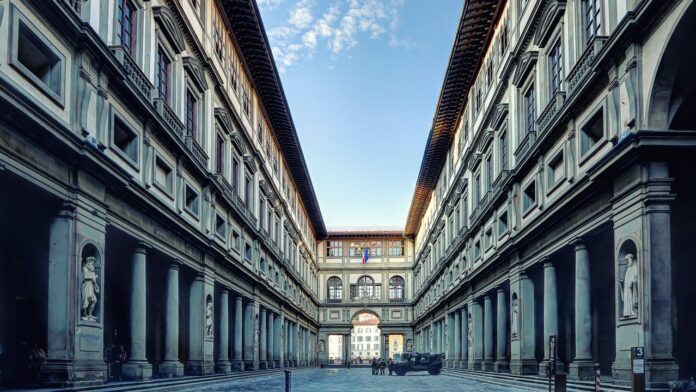 While working on an extensive restoration project at the world-renowned Uffizi Gallery in Florence, a couple of construction workers happened upon two Renaissance-era treasures: a pair of frescoes depicting none other than Duke Ferdinando I de Medici and his son Duke Cosimo II de Medici, both of whom ruled over Florence in the 16th and 17th centuries, respectively. The two long-lost portraits had been covered up by plaster sometime during the 18th century, which was not unusual during that period of time.

The Uffizi, which translates to “offices” in Italian, was originally built for the Medici family to house additional workspaces for Florentine magistrates. The uncovered portrait of the young Cosimo II stands in the west wing over an archway in one of the rooms formerly used as a government office, with the portrait of Duke Ferdinando a few doors down. Thought to be the work of prolific Florentine fresco painter Bernardino Poccetti, the young Cosimo is depicted in full length, with female figures at his feet, allegorizing his conquest over the nearby city of Siena.

The precious frescoes were uncovered from the sheath of plaster during the ambitious Nuovi Uffizi project, which plans to add over 21,000 square feet of space to the museum, freeing up a total of 43 additional rooms, and adding numerous new pathways. The expansive restoration has also proven to be a continuous treasure hunt, as additional archaeological research has led to wide-ranging discoveries, from deposits of ceramics to medieval-era animal and human bones beneath the museum grounds. “It’s amazing how this building was adapted to new needs down the centuries,” Eike Schmidt, the German director of the gallery commented to The Times. “Each room tells a fascinating story.”

Beyond the additional space, the Nuovi Uffizi unveiling will include the opening of the Medici family’s restored 16th-century horse stables beneath the museum grounds, as well as a new entrance where the newly discovered frescoes will finally get their time in the spotlight. An undoubtable set of treasures, rediscovered thanks to the construction workers’ efforts.

Why Cannabis-Specific Cryptos Will Not Take On Mainstream, But Crypto In...