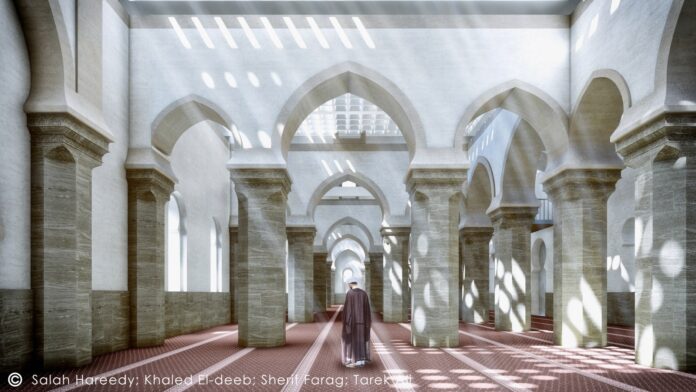 The recent announcement of the winning design for the restoration of the al-Nuri Mosque marks an important milestone in the rehabilitation of Mosul’s old city, in Iraq. The iconic al-Nuri, whose al-Hadba minaret barely survived ISIS’s three-year occupation of Iraq’s second city, has been reimagined by a team of Egyptian architects as a series of open public spaces, integrated into the remaining historic structures. There is a lot to do here, since the mosque’s prayer hall and other key components were heavily damaged in a major 2017 blast. But in keeping with the UAE- funded UNESCO program that is spearheading its restoration ( as well as that of two old city churches), the larger aim of the Al Nouri reconstruction project — and its novel use of courtyards, water elements and shading to mitigate climate and scale — is social cohesion and community repair for Mosul.

The aptly named “Courtyard Dialogues” project, says the winning team, which was awarded a $50,000 prize for the competition, was inspired by the Quranic verse “…and made you peoples and tribes that you may know one another…” (Holy Quran 49:13), as well as by the traditional architecture of the city of Mosul. Beyond the challenges of balancing historic architecture with contemporary needs, the key to the design, says architect, professor, and winning team member Khaled El-Deeb, was “humility.”

“We didn’t want to impose our vision on the neighborhood,” said El-Deeb in a phone interview about the competition, which was run jointly by UNESCO, the Sunni Waqf who own the site, and the Iraqi Ministry of Culture. “We wanted to integrate it with the surrounding urban context.”

Drawing both material inspiration and typology from the Ottoman-era homes in the area, the mosque complex—which encompasses a school, a museum, an art institute, and a community center—employs simple lines and a palette of local brick, alabaster, and glass. Scale and solidity are broken down by using glazing and perforated brick, creating the screen-like feel of a modern take on lattice-like mashrabiya design.

The main entrance, in keeping with the competition brief, is now off of al-Farook Street—the historic thoroughfare that linked Mosul’s Muslim, Christian, and Jewish areas, while four new entrances located at key junctures on the site connect the larger community to the complex.