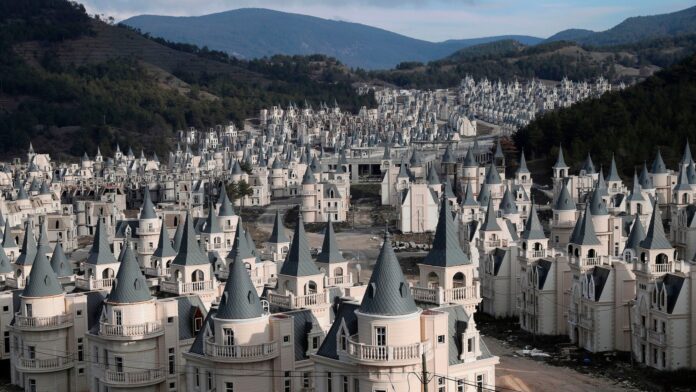 Over the past several centuries, European monarchies’ power and influence over their respective country’s politics may have dwindled, but their stately châteaux, castles, and palaces have endured. There’s something about the dwellings’ undeniable extravagance and opulence that makes them utterly timeless, and perhaps that’s what lead the Yerdelen brothers, Turkish real estate entrepreneurs, to build a sprawling village, dubbed Burj Al Babas, complete with 732 mini-castles on the Aegean coast.

After all, it made sense: Rich foreigners uninterested in the south of France or the northeastern tip of Spain could enjoy the Mediterranean climate on Gothic-style rooftop terraces overlooking the lush Turkish forest. Not to mention, the project’s developers, Sarot Group (run by the brothers and their partner Bülent Yılmaz), chose the spot for their little kingdom carefully: in the Roman spa town of Mudurnu, which is well-known and well-loved for its hot springs and putative healing waters. Each villa would boast under-floor heating and Jacuzzis on every level, further enforcing the idea of European luxury in the Middle East.

Then Turkey’s economy came to a grinding stop due to a failed political coup, terrorist attacks, and, of course, the pandemic, and the developers were forced to declare bankruptcy. Plus, investors and buyers pulled their money out of the $200 million project, which didn’t help Sarot Group’s hopes of rebounding, and the former manor-dotted valley became a neighborhood of empty, half-finished shells.

From afar, the gray-roofed neighborhood looks like something out of a Disney movie—perhaps Beauty and the Beast—but, upon closer inspection, Burj Al Babas boasts an eerie post-apocalyptic feel with rows of partially completed castles, patchy landscaping, and zero signs of life. The empty village is chilling, to say the least—like a sparkling city ravaged by war.

Why Vaping Provides A Different High Than Smoking

Men Living Alone Are At Greater Risk Of Suffering From This

How Much Cannabis Can You Legally Possess In Oregon? New Rules...