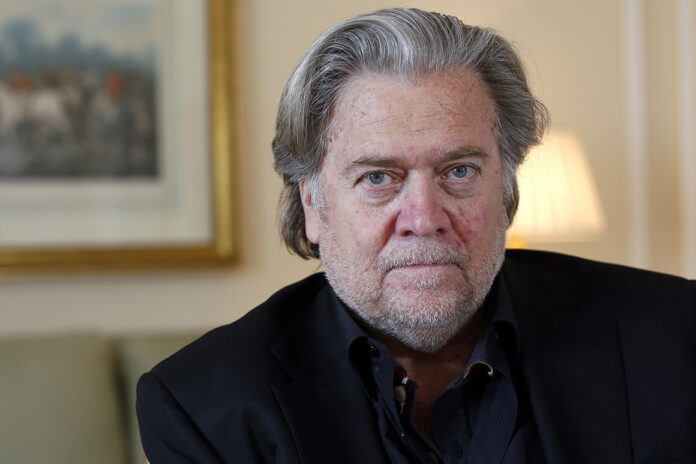 Almost a year ago, Google took a major step to ensure that its ubiquitous online ad network didn’t put money in the pocket of Steve Bannon, the indicted former adviser to Donald Trump. The company kicked Bannon off YouTube, which Google owns, after he called for the beheading of Anthony Fauci and urged Trump supporters to come to Washington on Jan. 6 to try to overturn the presidential election results.

Google also confirmed to ProPublica that it has at times blocked ads from appearing on Bannon’s War Room website alongside individual articles that violate Google’s rules.

But Bannon found a loophole in Google’s policies that let him keep earning ad money on his site’s homepage.

Until Monday, the home page automatically played innocuous stock content, such as tips on how to protect your phone in winter weather or how to improve the effectiveness of your LinkedIn profile.

The content likely had no interest for War Room visitors, especially since it was interrupted every few seconds by ads. But the ads, supplied through Google’s network, came from such prominent brands as Land Rover, Volvo, DoorDash, Staples and even Harvard University.

Right below that video player was another that featured clips from Bannon’s “War Room” podcast, which routinely portrays participants in the Jan. 6 Capitol riot as patriots and airs false claims about the 2020 election and the COVID pandemic.

The video player running Google ads amid innocuous clips disappeared from Bannon’s website on Monday, after ProPublica inquired with Google, Bannon and advertisers. The change was not Google’s doing: Google spokesperson Michael Aciman said the player did not break the company’s rules. He said Google’s policies were effective in preventing ads from ending up on sites with “harmful content.”

“We have strict policies that explicitly prohibit publishers from both promoting harmful content and providing inaccurate information about their properties, misrepresenting their identity, or sending unauthorized ad requests,” Aciman said. “These policies exist to protect both users and advertisers from abuse, fraud or disruptive ad experiences, and we enforce them through a mix of automated tools and human review. When we find publishers that violate these policies we stop ads from serving on their site.”

A spokesperson for Bannon, who was indicted this month for stonewalling Congress’ bipartisan investigation into the Jan. 6 insurrection, declined to answer questions for this article.

Zach Edwards, the founder of Victory Medium, a consulting firm that advises companies on online advertising, said the digital ad industry, including Google, is rife with loopholes and bad behavior, and its complexity prevents advertisers from understanding what they’re funding. “A lot of times ad buyers just shrug their shoulders and are like, ‘It’s video ads, what can you do?’” he said.

Of Bannon’s dodge and Google’s acquiescence to it, Edwards added, “Nothing about this is aboveboard.”

The vast majority of online ads aren’t purchased through direct relationships with the sites on which they appear. Instead, brands use automated ad exchanges like Google’s that rely on real-time auctions to automatically place ads in front of people who fit a brand’s target audience. As long as Google keeps the War Room website in its network, and as long as brands don’t specifically block it from their ad buys, Bannon’s site can keep collecting money. Warroom.org draws between 450,000 and 1 million visits a month, according to traffic tracker SimilarWeb.

And Google takes a cut of each dollar from ads it places on the War Room site.

“For most advertisers, having an ad placed on a Steve Bannon-affiliated outlet is the stuff of nightmares,” said Nandini Jammi, the co-founder of Check My Ads, an ad industry watchdog. “The fact that ad exchanges are still serving ads should tell brands that their vendors are not vetting their inventory, and I wouldn’t be surprised if advertisers who have found themselves on War Room request refunds.”

Companies contacted by ProPublica said they didn’t intend to advertise on War Room’s site and would take steps to stop their ads from appearing there. Land Rover called the ad “an error.” Harry Pierre, a spokesperson for Harvard’s Division of Continuing Education, said the school is working with its ad buyer to update its list of unwanted websites. Adobe said its ad was a violation of its brand safety guidelines. “We worked with the ad partner to remove the ads from the site,” a spokesperson said.

DoorDash also blamed a third-party vendor. “DoorDash’s mission is to empower local communities and provide access to opportunity for all, and we stand against the spread of disinformation that undermines those principles,” the company said in a statement.

Spokespeople for Volvo did not respond to requests for comment.

Meanwhile, Google may have banned a different site affiliated with Bannon. Until recently, the site Populist Press earned money via Google’s ad network. The site, styled to imitate the Drudge Report, was prominently linked on the War Room homepage and draws roughly 5 million visits a month, according to SimilarWeb.

According to an online disclosure from a former advertising partner, Populist Press is affiliated with August Partners, a Colorado company registered to Amanda Shea, whose husband, Tim Shea, was a partner of Bannon’s in We Build the Wall initiative. Bannon and allies used We Build the Wall to solicit money to fulfill Trump’s campaign promise of a wall on theU.S.-Mexico border. Federal prosecutors accused Bannon, Tim Shea and other associates of misusing the money, and Trump pardoned Bannon before leaving office. An attorney for Tim Shea, who is awaiting trial, declined to comment, and Amanda Shea did not respond to a request for comment.

At some point during the week of Nov. 15, Populist Press stopped showing Google ads — and it stopped being promoted on the War Room homepage. Aciman, the Google spokesperson, declined to comment on whether Google had banned Populist Press, but said that the site “is not monetizing using our services.”

Bannon’s “War Room” podcast draws a massive audience, with more than 1 million downloads across platforms, including Apple’s. A sort of far-right “Meet the Press,” it’s the go-to talk show for pro-Trump influencers and Republican hopefuls. Frequently using violent imagery, Bannon and his guests promote new ways of trying to overturn the election, such as demanding “audits” of the 2020 ballots. Since February, Bannon has inspired thousands to take over local-level Republican Party committees, unlocking influence over how elections are run from the ground up.

On his podcast in 2020, Bannon called for the beheading of Fauci and FBI director Chris Wray. On the eve of Jan. 6, Bannon said, “We’re on the point of attack” and “all hell will break loose tomorrow.” Bannon was also reportedly involved in the Trump team’s command center on the day of the riot, which is part of congressional investigators’ interest in his testimony and records. Since the insurrection, Bannon has taken up the cause of people held on charges related to the Capitol riot.

In addition to his podcast, Bannon has spun a complex web of political and business ventures. He co-founded a training academy for right-wing nationalists that got mired in a legal dispute with the Italian government over control of a medieval monastery near Rome. A media company he launched with Guo Wengui, a fugitive Chinese billionaire on whose yacht Bannon was arrested in 2020, was part of a $539 million settlement with the Securities and Exchange Commission in September for illegally marketing digital currency. Before advising Trump, Bannon had a wide-ranging career in finance and movies, and his pardon from Trump lifted a $1.75 million lien against his house in Laguna Beach, California.

Bannon’s megaphone is not just influential. It’s also lucrative. His show and website have promoted fellow election fraud evangelist Mike Lindell’s MyPillow business, as well as a cryptocurrency investing newsletter called TheCryptoCapitalist. (The marketers of an unproven COVID-19 treatment that Bannon promoted were sued by the Justice Department and the Federal Trade Commission in April. The chiropractor behind the treatment denies the government’s accusations.) The War Room site also contains ads from MGID, a network that places content ads that look like links to related articles and sometimes promote dubious health or financial products.

It’s not clear how much money Bannon makes from online ads. But industry data shows that the links placed by MGID are much less profitable than the video ads facilitated by Google. (MGID did not respond to a request for comment.)

The issue is that major brands likely have no idea that they’re advertising on the site of one of the biggest perpetrators of bogus election fraud claims. That disconnect between brands and where their ads and money end up is a failure of digital advertising and a concern for consumers, according to industry experts.

“Over the past few years, consumers have become really vocal about buying from brands that are aligned with their values,” said Jammi of Check My Ads. “When they find out a brand is funding toxic content, that matters to them.”

A similar scenario has played out with ads that aired during Bannon’s podcast airing on a right-wing website called Real America’s Voice. In March, for instance, an ad for prescription coupon company GoodRx appeared on Bannon’s show.

“We take the trust and reputation of our brand very seriously and have strict advertising standards in place, which include not participating in heavily editorialized news programming,” the company said in an emailed statement to ProPublica. “This placement was an error in the media buying policies.”

Bannon’s show also airs on Pluto TV, a streaming service owned by ViacomCBS that is available on Roku and other devices. This month, the show on Pluto featured ads for such major companies as Men’s Wearhouse, Lexus and Procter & Gamble, according to monitoring by the Democratic-aligned site Media Matters. As with the Google video ads on the War Room website, these ads are not placed directly, and companies were at a loss to explain why they had appeared on Bannon’s show. (Bannon’s podcast is available in the Google Podcasts app, but the company does not place ads in it.) A Lexus spokesperson said the company’s ad was briefly on Bannon’s site and taken down. A spokesperson for Procter & Gamble did not respond to a request for comment.

“Our marketing spend follows targeted customers, rather than choosing specific programs we want to appear alongside,” said Mike Stefanov, a spokesperson for Tailored Brands, which owns Men’s Wearhouse. “The team continually refines the criteria used, but the appearance of advertising on a specific program does not necessarily mean the company agrees with or endorses the views espoused.”

5 Of The Best Date Apps For LGBTQ+