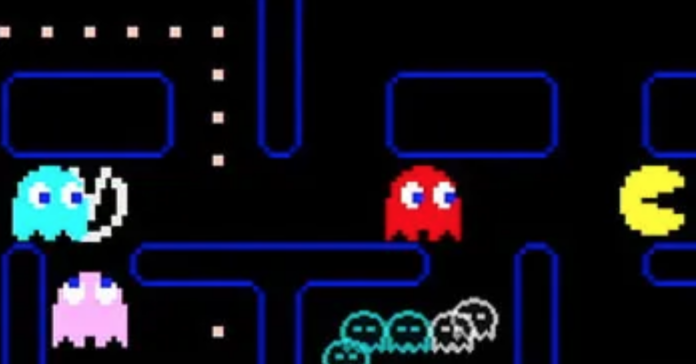 Cool fact: The ghosts’ hunting algorithm, which is the key to the original game and to Ms. Pac-Man, is apparently also present in 99.

It looks like the original Pac-Man, and plays an awful lot like it too, but once you see the titular yellow hero chow down on a line of ghosts 33 deep like some kind of insatiable, eyeless animal, it’s clear the classic formula has been juiced a bit.

It’s Pac-Man 99, Nintendo Switch’s new 99-player online battle royale, and I’ve been low-key obsessed since it came out in April.

My first encounter with Pac-Man was pretty typical for the 1990s. It was a lonely vintage game in the corner at my local Aladdin’s Castle arcade at Countryside Mall, a quiet machine in the glory days of TMNT, Mortal Kombat, and Street Fighter II. I tended to play it because there was never a wait (it was already considered a relic in 1992) and unlike the fighting games, I could actually survive for more than a couple of minutes at a time.

Tim Lapetino, coauthor of the forthcoming art/history book Pac-Man: Birth of an Icon, found the original at his local Pizza Hut—albeit in the “cocktail table” version, with the screen lying horizontally between two players. “It was side by side with a Tron cabinet,” he recalls, “so that was a pretty solid Pizza Hut.”

The eternal nature of its presence in arcades (and Pizza Hut/Hungry Howie’s) is notable—any modern barcade worth its salt will have either the original or a Ms. Pac-Man, and often both.

“It’s an odd game in the sense it was so popular in the ’80s, but then became a staple of arcades even long after tech had moved on,” says Lapetino. “I don’t remember there ever being a time when it was not part of my video game life, and I’ve played literally every version that’s out there,” even notorious ill-conceived sequels like Professor Pac-Man.

That old cabinet at Aladdin’s Castle may have planted the seed, but it wasn’t when I became hooked. That would have been early 2002, during my junior year of college, when Pac-Man was best played on a NAMCO Classics Playstation disc at the local regs dealer’s apartment, through a cloud of strawberry-Philly scented smoke while blasting Jurassic 5.

This is where myself and a few other gamers would develop the “philosophy of Pac-Man.”

Boiled down, it’s that the players who are just trying not to get eaten, those only playing to hang on for the next level, are shark food (or ghost food, as the case may be). To thrive in Pac-Man you have to go for the gusto, become the hunter, and eat four ghosts for every power pellet, while still snacking on every single fruit you can get your jaws around. Amateurs play to “not die.” Real ones play to never die, and to eat everything.

Five or six of us would gather in a cramped university common area, setting aside modern hits to throw on the NAMCO disc. “Are you guys fuckin’ serious?” a random freshman asked, as we disregarded the shiny new GTA: Vice City for a marathon session of the 1980 antique that kickstarted an industry.

So last April, when Pac-Man 99 came out for free on Nintendo’s online store, I was firmly part of its target audience. Finally, a battle royale that I wasn’t objectively awful at. The FPS era passed me by, and by the time I cared to try, it was too late to catch up. I knew better than to even attempt Fortnite.

Pac-Man 99, however, is another matter entirely—a battle royale that finally felt accessible. Where many Pac-Man offshoots and variants go wrong is that they stray too far from the source. If they don’t feel like Pac-Man, they often fail to catch on with gamers. Not Pac-Man 99. In this 99-player online slugfest, there’s a lot more going on, for certain—sometimes I struggle to even visually track all the bonkers action onscreen—but at its core, it still plays and feels like the original.

“I like 99 a lot—the modern take is introducing more chaos over the simple gameplay,” says Lapetino.

Deep Down, 99 Is the Pac-Man You Know and Love

Jeff Pickles knows a little something about the enduring appeal of the game. In December of 2013, Pickles achieved gaming immortality, becoming only the eighth man in history to achieve a perfect score on an original Pac-Man arcade cabinet.

Everyone’s journey is different—some take years, even decades to develop the skills necessary for such elite play, but Pickles estimates he spent only about 350 total hours over 18 months in order to go from never having played the game as an adult to a perfect score. It’s a result the developers didn’t really even anticipate, as the screen glitches out toward the game’s end.

For Pickles, it’s all about the ghost’s hunting algorithm, the one used in the original as well as Ms. Pac-Man, and which is apparently also present in 99. What clued him in right away is that “if you have a ghost on your tail, pass through that T-intersection area above the ghost house—the ghosts will not track you through that area. I love that, because that tells me: this is the algorithm I know,” he says.

I do hate Pinky, on an oddly personal level.

Roughly, Pickles explains that “the red one is the only one who will target you directly. The pink one will always go to a spot about two squares in front of your mouth—so he’s always trying to cut you off.” He continues, “The blue one, he’s a weird geometry problem I’d kind of have to draw out to explain.” Pickles says that since all ghost movements are based on the movements of Pac-Man, your joystick is de facto controlling them all—to really excel at the game, you simply have to think about five things moving at once, instead of one solitary Pac-Man. That’s all.

But, Pickles says, “It’s simple once you see the AI logic, but unless you study it, you wouldn’t know … that’s the brilliance of it. I’m glad to see the game getting back to that, and not just heatseekers.”

In some variations, for instance 1982’s Baby Pac-Man, a Pac/pinball mash-up, “the algorithm is awful. The ghosts just seek you out directly, and that started a line of different Pac-Man games where the ghosts didn’t behave the way they should, they didn’t have the same personality.”

“And what’s the fun of 4 ghosts all converging at one point? Homing missiles aren’t very interesting.” So a game can have a maze, some dots, and ghosts–but the algorithm is what lies at the heart of any proper Pac-Man title.

“When Toru [the game’s creator, Toru Iwatani] and his team made those algorithms, they did a great job of making it feel like the ghosts have their own personalities, and that’s part of the lasting appeal. It almost feels personal.” I nod, because it’s true—I do hate Pinky, on an oddly personal level.

Ryan Harris is the writer and host of Nerd Alert! Trivia, as well as a member of my global Mario Kart online group, where he routinely eats red shells for breakfast. He picked up Pac-Man 99 after enjoying playing its battle royale forerunner, Tetris 99. “The 99 titles initially freaked me out due to the ‘battle royale’ designation, but once I realized they were the same games I loved from my youth—just infused with a manic energy and clever tweaks to the gameplay—I was hooked,” he says. “Don’t get me wrong, I love a good, interminably long open-world RPG, but no games I have played in the last year or so have sucked me in like Pac-Man 99 and Tetris 99.”

For a variety of reasons, Harris has been struggling to make headway in games recently. “I racked up about 30 percent completion on half a dozen games during quarantine. Maybe that’s due to just being older, having less time, more arthritis, shorter attention span, or needing to find my glasses just so I can read a fucking skill tree,” Harris says with a laugh.

When he recalled his run at Assassin’s Creed: Valhalla, Harris says, “I found myself not even wanting to boot it up, because I knew there is no scenario where I have enough time in my day to really accomplish anything in-game.”

For 99 the pick-up-and-play factor is also extremely high. “I love the quick-fix aspect. Matches can be over in a heartbeat, they’re never more than a few minutes, yet I keep coming back for more. If anything, I find myself playing Pac-Man 99 for much longer sessions than I’d put in on any other game.”

An Arcade Legend, Made Multiplayer

While some players have found the new mechanics (speed boost, ghost train, etc.) and the opportunity to target specific segments of the competition (it’s possible to choose to direct obstacles/attacks toward those in the lead or those trailing the pack) confusing, it’s not something that has bothered Harris.

“The great aspect of the new battle royale mechanics is that if you are a Pac-Man or Tetris savant, you can completely ignore them if you want. It’s entirely possible to not even understand how the different attacks work, and still crack the top ten. That being said, once you figure out what enabling ‘train’ or ‘power’ means, it opens up a whole new world of strategy.”

For Lapetino, the sheer size of the endeavor is something to appreciate. “I really applaud the large scale. Bringing in 100 players? I like that. I think it just shows Pac-Man is always relevant to any gaming audience, with just a few modern tweaks.”

“More Pac-Man is always better. In my research over the past year and a half, whenever there is a new game tech—VR, or using Google maps to play—it’s always there in the forefront because it’s such a simple game.”

That simplicity lies within the gameplay mechanics as well as the character design, famously said to have been inspired when Iwatani ordered a whole pizza for lunch and lifted out the first slice of the pie (a half-truth, but one too good not to share, much like Newton’s falling apple).

Iwatani himself admitted in an interview there was “temptation to make the Pac-Man shape less simple … someone suggested we add eyes. But we eventually discarded that idea because once we added eyes, we would want to add glasses, and maybe a mustache. There would just be no end to it.”

“I designed Pac-Man to be the simplest character possible, without any features such as eyes or limbs. Rather than defining the image of Pac-Man for the player, I wanted to leave that to each player’s imagination.”

Like me, Pac-Man turned 40 last year, so maybe it’s no coincidence that I admire his ability to constantly reinvent himself while still remaining true to the basics that got him where he is.

“Every generation discovers a new way to play Pac-Man, whether that’s via new consoles, computers, phones, or one of the variations,” says Lapetino. “But they always seem to find their way back to the original.”